Welcome to the WKA Home Page Photo 2008 Galleries, presented to showcase the many Clarinet events, Artists, and Teachers. Refer to the  News Pages for detailed information and Photo Galleries.  Presently, past photos that have been shown are being prepared for uploading and will be on Page very soon.

Special Birthday Concert with the New York Philharmonic held 13 December 2008 with Mr Carter present with Special Film about his perspectives, concepts, and experiences with a World Premiere of a new work Poems of Louis Zukofsky for soprano and clarinet.  The first world premiere of his music following his 100th Birthday and performance of his Clarinet Quintet

Sabine Meyer, World foremost German Klarinettist on Tour with the Tokyo String Quartet (Brahms Clarinet Quintet Op 115)with 2 Concerts held at University of Michigan at Rackham Auditorium in Ann Arbor 12 October, and the day before at Dalton Hall at Western Michigan University in Kalamazoo on 11 October 2008

Sebastian Manz from Germany was awarded both a first prize and the audience prize. Shelly Ezra, Israel, and Taira Kaneko, Israel, got a third prize

Richard Nunemaker, Bass Clarinetist in Houston Symphony, in Interview regarding his Retirement from the Orchestra with Bob Stevenson of KUHF Houston 1 September 2008

Performances, Master Classes and Instrument Lectures held at the Prague Conservatory and Atrium, Czech Republic   -  10 - 11 September 2008  with Jiri Krejci and Petr Hejny on the early clarinet   (Wanhal-Zach-Lefevre-Sciroli and Beethoven) with Luigi Magistrelli (Professor of Clarinete at the Milan Conservatory in Italy) and Lecture about the the Reform Boehm system Clarinete 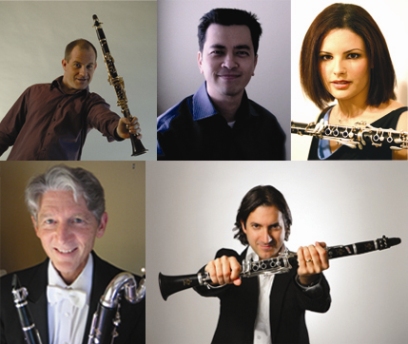 ClarinetFest 2008 held at the University of Missouri at Kansas City 2 - 6 July, Dr Jane Carl, Director in Collaboration with the International Clarinet Association

The Capriccio Clarinet Orchestra from The Netherlands tour to Spain from July 3 - 13, Conducted by John de Beer.   They were invited by the ChamberArt Music Festival in Madrid. A total of six concerts with three concerts in the Royal Palaces of Aranjuez, La Granja and Segovia.

Clarinet and Saxophone Workshop 'To Play is to Blow...To Blow is to Play' of Students of Richard Nunemaker, Bass Clarinetist in the Houston Symphony held 10 - 15 June 2008 at the College of St Thomas in Houston, Texas

Cristo Barrios performs with the Arditti String Quartet. in the World premiere of Blai Soler's "Clarinet Quintet"  and performs in the Olivier Messiean Anniversary Festival, Performances 19 and 20 May 2008 in Spain and Portugal

The youngest University Professor on world record is Alia Sabur (USA, b. 22 February 1989).  She was appointed as a full-time faculty Professor at Konkuk University, Seoul, South Korea as Research Liaison  (with Stony Brook New York, USA) with effect from 19 February 2009, the youngest on record in the Guiness World Book of Records.  Graduated from Drexel University, with an M.S. and a Ph.D. in materials science and engineering. At Konkuk University, Sabur said she will take part in classroom instruction, but will also focus on research into developing nanotubes for use as cellular probes that could help aid in cures for diseases. Recognition presented on the MSNBC Today Show 23 April 2008

The Effortless Clarinet/Saxophone Recital on January 14, 2008, at the University of St. Thomas in Houston. Richard Nunemaker, Bass Clarinetist in Houston Symphony, Director