The 29th Annual Reunion of Alumni from as far back as the 1940's returned to get together with colleagues and friends while they were here. Over 100 came and many who came for the first time were surprised by the many friends they haven't seen in years, maybe as many as 30+.  Many who left the Band in the earlier days have moved on to the performance and Teacher professions including Universities.  As mentioned in earlier summaries, these reunions are vital for both the veteran players and the present Band organization, as folks can see how things have changed and still be the same in many ways.  Many returnees performed with the Band, rehearsal and all, with critical attention to the program being performed. The level of performance was total professional class as the concert displayed,  Programs and more are in the above galleries. 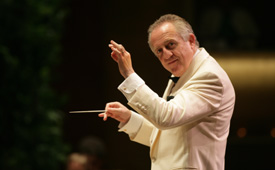 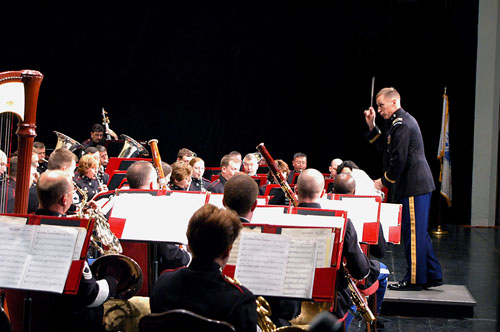 BRAMWELL TOVEY
Urban Runway
Bramwell Tovey’s Urban Runway, subtitled an entertainment for orchestra, is a co-commission of the New York Philharmonic and the Los Angeles Philharmonic, and is receiving its World Premiere performances on this Summertime Classics program. It was composed in March 2008. Mr. Tovey describes the work as follows:

“The concept for Urban Runway grew out of an amusing conversation with friends concerning the colorful idiosyncrasies of those who offer their patronage to the fashion houses on Fifth Avenue in New York or Rodeo Drive in Los Angeles.

“New clothes, even those unseen inside designer shopping bags, appear to influence the gait of shoppers as they strut along the sidewalk. With a little imagination the listener might care to speculate on the characters depicted in the music.

“Based upon a simple ostinato figure housed in a cakewalk rhythm, the score is laced with jazz and minimalist flavors. A flugel horn, high clarinet, and solo trombone introduce distinctive elements, and perhaps characteristically, the violas take a moment to remind us of the benefits of the ‘pre-owned’ grunge look.”

AARON COPLAND
Four Dance Episodes from Rodeo
When the Ballet Russe de Monte Carlo, one of the successor companies to Diaghilev’s original Ballets Russes, was seeking a new work from an American choreographer, it selected the relatively unknown Agnes de Mille. Since the piece was to have a newly- commissioned score, de Mille selected a person she considered to be “the best” composer: Aaron Copland, whose Billy the Kid, choreographed by Eugene Loring in 1938, had fired imaginations. Set in the Texas of 1900, the de Mille-Copland Rodeo tells the tale of a tomboyish cowgirl who is caught in a classic romantic triangle with a handsome, dashing wrangler and a comical, charming champion roper.
Into his sweeping, lyrical score, Copland wove in traditional American folk songs, some of them played in their entirety, for a work that evokes the broad vistas and rough-and-tumble society of the American West. Following the work’s highly successful premiere in 1942, Copland devised a suite of the work for larger orchestral forces, keeping the central scenes of the ballet intact. Four Dance Episodes from Rodeo remains one of Copland’s best-known works. The New York Philharmonic’s first complete performance of the Four Dance Episodes was in April 1960, led by Leonard Bernstein; the most recent was in July 2004, led by Bramwell Tovey.

JOHN PHILIP SOUSA
Marches
John Philip Sousa composed songs, suites, dances, and several notable operettas, including El Capitan (1895), but he is overwhelmingly known for his band marches, which earned him the nickname The March King. Within the strictures of the traditional quickstep march, Sousa was able to create a striking diversity of character and effect, and his 135 marches are remarkable for their variety as well as for their melodic invention. With their rousing energy and patriotic titles, Sousa’s marches are quintessential Americana; in 1987, his The Stars and Stripes Forever was named the official National March of the United States. The New York Symphony (which merged with the New York Philharmonic in 1928 to form today’s New York Philharmonic) first performed marches by Sousa in June 1901 in Philadelphia, conducted by Walter Damrosch. The most recent performances of Sousa marches were in July 2007, led by Bramwell Tovey.
BRAMWELL TOVEY British conductor Bramwell Tovey is music director of the Vancouver Symphony Orchestra (VSO), and was recently named principal guest conductor of the Los Angeles Philharmonic at the Hollywood Bowl. He works frequently with the Toronto Symphony, Montreal Symphony, Royal Philharmonic, and Bournemouth Symphony orchestras, among many others, and has been the conductor and host of the New York Philharmonic’s Summertime Classics series since its founding in 2004. His tenures with the VSO, Luxembourg Philharmonic, and Winnipeg Symphony Orchestra have showcased his expertise in the opera, choral, and British repertoire. Highlights of Mr. Tovey’s 2007–08 season include a 2007 Grammy Award for his recording with violinist James Ehnes and the VSO of violin concertos by Walton, Korngold, and Barber; a collaboration with tenor Ben Heppner and percussionist Evelyn Glennie; a six-concert Beethoven festival, featuring pianist Lang Lang and violinist Anne-Sophie Mutter; and appearances with orchestras across East Asia in the spring of 2008 in advance of the VSO’s fall 2008 tour of China. For 12 years Bramwell Tovey served as music director of the Winnipeg Symphony Orchestra, where he founded its highly regarded New Music Festival. From 2002 to 2006, he was music director of the Luxembourg Philharmonic. Also a composer, he has been commissioned by the Calgary Opera to compose the company’s third, original, full-length opera, The Inventor, which will premiere in January 2011, and he received the Best Canadian Classical Composition 2003 Juno Award for his Requiem for a Charred Skull. Mr. Tovey is also an accomplished jazz pianist. Bramwell Tovey has been awarded several honorary degrees, and in 1999 he received the M.
Joan Chalmers National Award for Artistic Direction, a Canadian prize awarded to artists for outstanding contributions in the performing arts. He last appeared with the New York Philharmonic in July 2007, at the Bravo! Vail Valley Music Festival. THE UNITED STATES MILITARY ACADEMY BAND The United States Military Academy Band is a direct descendant of the small Band of Musick that had assembled at West Point by 1817. The modest 21-piece military band of that era has evolved into the 48-member wind band of today. The Band’s events annually attract thousands of visitors to the academy. The most popular of these are the summer concerts at West Point’s Trophy Point Amphitheatre. The Concert Band has a history marked by close associations with renowned composers, such as the late Percy Grainger, one of the first composers to fully utilize the unique instrumentation of the wind ensemble and often called upon the band at West Point to proofread his new compositions and occasionally appeared as soloist. In 1940 the Concert Band premiered Grainger’s Hill Song #2. The Band also enjoyed its relationship with American composer and conductor Morton Gould. His 1952 contribution to the sesquicentennial of the United States Military Academy, Symphony for Band, commissioned by the Concert Band, still stands as a staple in the contemporary wind band repertoire. The United States Military Academy Band last appeared with the New York Philharmonic in December 1964, performing Berlioz’s Grande Symphonie, led by William Steinberg. The Band is under the direction of Lt. Col. Timothy J. Holtan, commander/conductor. 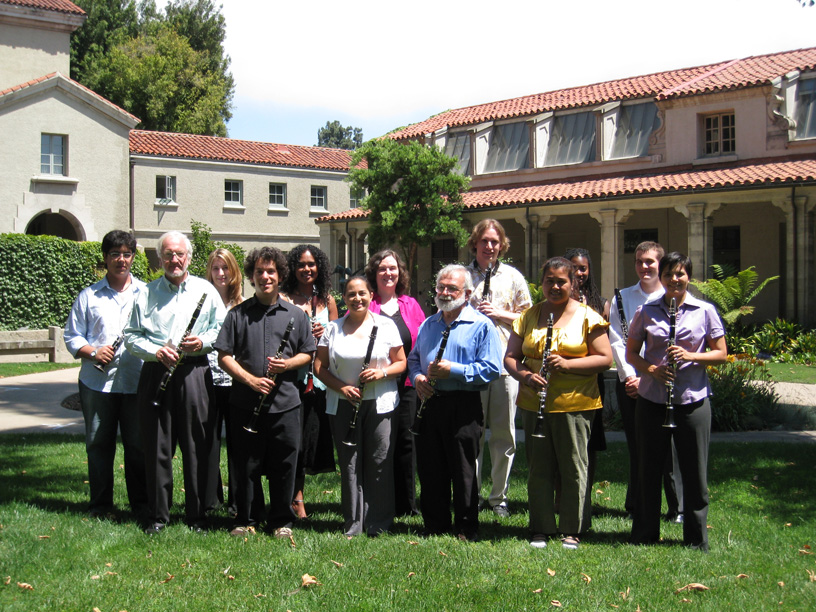 Arizona, and Spain, performed in public concerts and participated in daily master classes with Dr. Thornhill,and with Gary Gray,

and Tania Fleischer worked individually with participants and performed with them in master classes and recitals. All participants had private

lessons with Margaret Thornhill and had the option of extra lessons with guest coaches. Lori Musicant Koch conducted the festival clarinet

how to bring the clarinet to the body, rather than the body to the instrument, and which revealed how much better the clarinet sounds when played
without head and neck tension.

Next year's festival will take place June 7-14, 2009. Applications will be accepted beginning January 15, 2009. An audition tape or CD is
required for all first-time applicants. For information and applications, please visit the website:

Clarinet and Saxophone Workshop 'To Play is to Blow...To Blow is to Play' of Students of Richard Nunemaker, Bass Clarinetist in the Houston Symphony

This annual workshop including students of Clarinet and Saxophone included a week of lesson, recital preparation, and a Finale Recital covering a broad list of literature.  Richard Nunemaker, prominent Bass Clarinetist and soon to retire from the Houston Symphony hosted this event entitled as above.  The workshop was held at the University of St Thomas where Mr Nunemaker is on faculty.

A hugely successful Symposium at age 33 convened at this major Summer Clarinet hub attracting students, teachers, and established professionals from all over the United States, with performance levels bordering from stellar to shell shock.  All performances, covering a broad array of literature from all musical periods, and including New Music, and Jazz, as brilliantly performed by Legend Jazz star Buddy DeFranco, recipient of the Jazz Masters Fellowship from the US National Endowment for the Arts in 2006.  Many unknown artists, many holding Professorships and Orchestral positions throughout the country performed at superstar standard as posted programs will indicate.  Many Master Classes were held, featuring artists as Charles Neidich from Juilliard in New York, Eddy Vanoosthyse, Solo Clarinetist in the Flemish Orchestra in Belgium and a major Soloist and Director of a major Clarinet Choir, Howard Klug, Professor of Clarinet at Indiana University, Fred Ormand, Professor Emeritus from the University of Michigan, and Frank Kowalsky, Professor at Florida State University, and Larry Guy, Professor at Vasser College in New York, and a major Solo and Orchestral player, and an authority on the concepts and influence of Daniel Bonade.    Each of these classes were 2 hours or more in length and intensive, covering many aspects of fundamentals on tone, proper approaches to breath support, tonguing, musical style, building confidence, and dispelling habits that can interfere with quality playing.

As with each year, the Clarinet Industry is actively involved with exhibitions of everything from Professional and Student instruments, Accessories such as Mouthpieces, Reeds, other related items, Publications, Recordings, Bells, Barrels, and more.  Many directly involved in the design of new products attend to introduce new products.  Many attendees use this as an opportunity to purchase and benefit.

Guido Six, a renowned Clarinet Choir Director and head of the Claribel Clarinet Choir in Ostend, Belgium, and Director of 2 ClarFests in Belgium  (Ghent- 1993), and Ostend, Belgium in 1999, conducted a Symposium Clarinet Choir with many of his published transcriptions, all of high quality.   The group gave a very successful performance.   Eddy Vanoosthyse was a soloist in Cacini's Ave Maria, in memory of Vito Pascucci, past President of G LeBlanc in the USA.

Two outstanding Clarinet Quartets, the Academy Quartet, with members of the United States Military Academy Band at West Point, and the Prestige Quartet gave level 10 performances. All the quality earmarks in an ensemble were covered with distinction.  Many of the recitals given by faculty included important chamber music literature.

The annual Clarinet Competition was held where students and High School players competed and awarded for their placement as winners. Ben Redwine, a graduate of Oklahoma University and Clarinetist in the US Naval Academy Band in Annapolis, Maryland , and a member of the Competition jury, gave out the prizes, including a Forte C Clarinet, Reed Products given by Ben Amato, and honorable mentions.

One of the very attractive aspects of this conference is the friendly informal quality ever present. Everyone mingles and affects each other plus the superstar performances by many of the finest players in the country.  Several faculty are world-class soloists and they freely shared their gifts with anyone who asked.  Master classes told it all.  After hours, the partying was also inspirational, when one dines with several like interested colleagues.   For this and many other reasons, attendance each year is an absolute must come.  As Oklahoma City is a central geographic point in the US, everyone should be able to come.  Dr Etheridge has directed and developed this program his whole career for 33 years, one major committed accomplishment for the Clarinet Community.  Dr Etheridge is an appointed WKA Artist VIP.