This event led by Leslie Craven (principal Clarinet – Welsh National Opera), (sporting a cool WKA polo shirt) is hosted by the JMAS department (junior music and access studies department of the college but is open to all ages and standards). The Convention is now in its tenth year and this year proved to be the most successful so far.

Leslie  devised a busy day for the delegates featuring simultaneous classes for different levels, concerts by guests and choirs, lectures on instrument repair and maintenance, reed adjustment and lots of other clarinet related issues. Peter as usual conducted the convention massed choir and devised a challenging programme for the final evening concert. The tutors also gave a combined performance of “The Poacher” for clarinet choir by distinguished British composer  Gordon Lewin.

The distinguished guest this year was Philippe Cuper (Solo clarinet of the Paris National Opera) who gave a dazzling lunchtime recital including Donatoni ‘s “Clair” – an impressive display of Pyrotechnics. He also gave several master classes on French music and took part in the evening concert with the combined clarinet choirs and tutors.

This year saw a convention with more advanced players taking part than any other year with players coming from far and wide, some travelling  hundreds of miles. Several students from other major music colleges (notably the Royal College of Music, London) attended to have classes with the team including Philippe Cuper, Leslie Craven, Andy Roberts (current Chairman of CASS) and  Alistair Logan (Author of Music @ Site) .

Several choirs joined the course this year – the largest being the Peninsula choir who are regular visitors and this is their 3rd year of attendance.

A surprise guest artist joined the choir this year - former Principal Clarinettist of the B.B.C. Welsh Orchestra, Martin Ronchetti, inspired the students with his wonderful Eb clarinet playing in the massed choir.

Trade stands from John Packer Musical Instruments LTD, Vandoren, MARCA, Rico, Woodwind and Co, Providence Music, and CASS were present, without whom the event would not be possible. Les also launched his new Zinner based mouthpiece manufactured by Bradford Behn in Colorado U.S.A.

Over 80 clarinettists enjoyed a thoroughly exciting, challenging and rewarding day and later the tutors including Philippe retired to Les Craven’s house where his wife had made a stunning Paella – nowadays this dish is the traditional fare for the tutors after the course – since Leslie’s  Spanish friend  Javier Defez - Requena tutored on the course few years ago and gave his family’s secret recipe to Les. 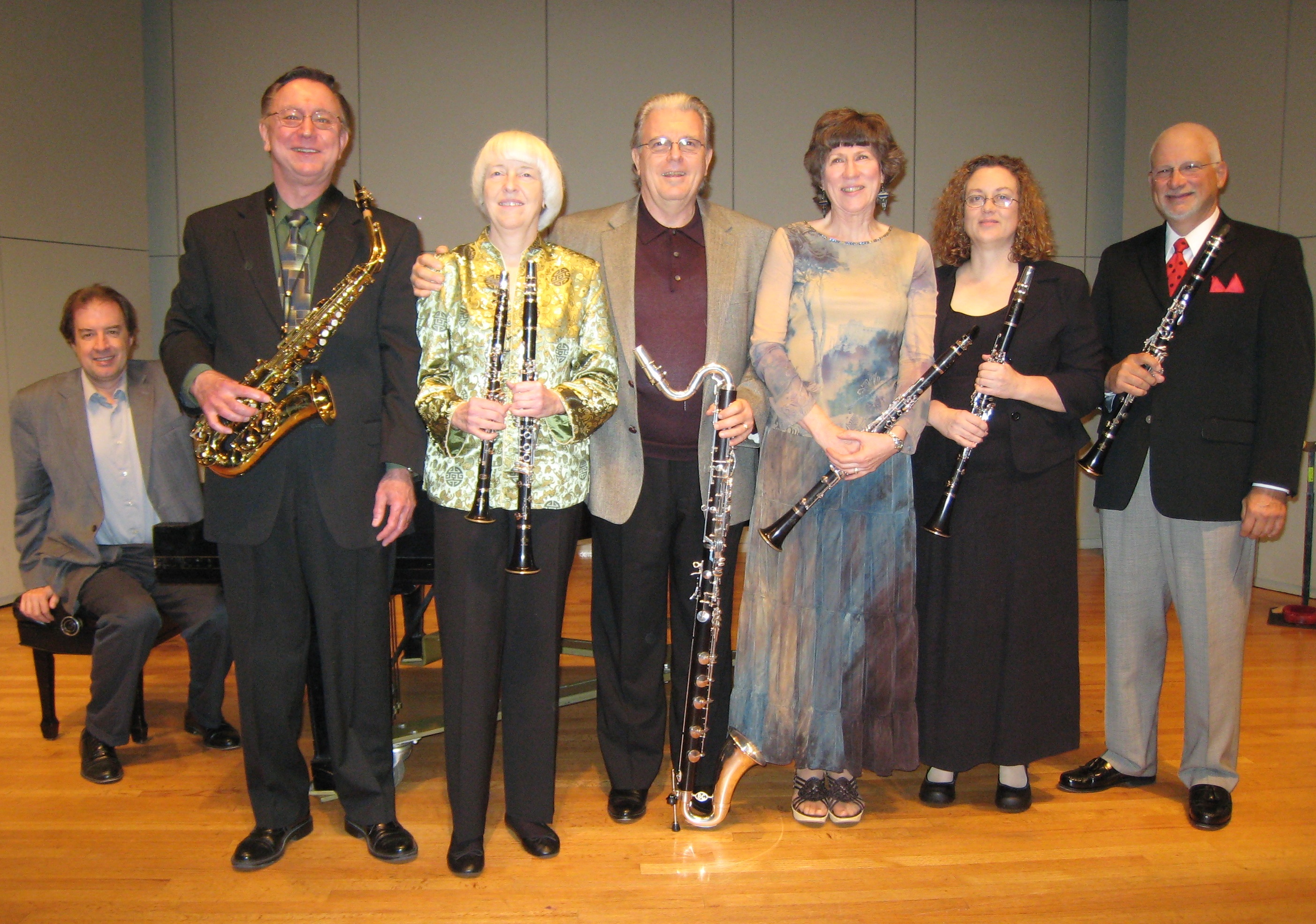 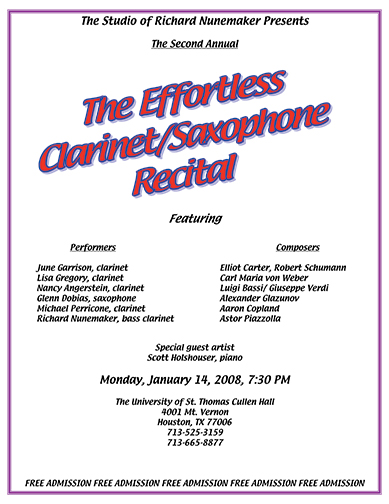 The 2nd Annual concert from this major Clarinet Studio directed by Houston Symphony Bass Clarinetist Richard Nunemaker was held at this campus with a varied unique repertoire suited for the above instruments.  More program information fortcoming.  Many new works for Clarinet are performed within this venue with proactive projects constantly in plan and past successes noted.  Check the Clarinet Premoere Page regarding the Louisville Prohect Recording with works commissioned and performed by Mr Nunemaker.  More future events are noted below:

Sunday, March 30th, 2008 2:30 PM, The To Play is to Blow...To Blow is to Play...5th Annual Recital featuring the students of Richard Nunemaker. Stay tuned for venue and program. Also featured on this concert will be a world premiere of a composition by Houston's Paul English composed for the To Play is to Blow...ensemble.

Richard Nunemaker will be taking part in CUBE's Groovin’ High, Groovin’ Low grand finale concert of its 20th anniversary season.  Taking a cue from the jazz tune “Groovin’ High,” CUBE will feature voices, flutes and bass clarinets in a concert that combines classical contemporary music and jazz in new and intriguing ways.