As the Autumn months are progressing, the Newsletter unfolds events and competitions that are followed with interest from players on the Global scale.   Some new innovations have been implemented including the below statement about future Newsletter Pages announcing events during those time periods.  Everyone is encouraged to follow these pages to plan to go to them.  For students and interested players, it is encouraged to attend a Grand scale Conference and a workshop per year to meet as many like-interested people as possible to advance your interests, careers, and contacts.  Many players have benefited from these ideas.  WKA is probably the most definitive resource for players seeking to find the ultimate role models and teachers who will make a difference in their performance lives along with the opportunities made available to see their goals met.

Photo Galleries are posted with the accomplishments of many fine Clarinetists who have made a success on a consistent level, including International tours, Solo performances, and Teaching successes.  WKA members are encouraged to send in anecdotal photos of important events so they can be noted.

A new event announcement method is now implemented to assist WKA members in their pursual of events. In each quarterly Newsletter segment, the events are posted in date order on those month pages only to avoid repeated postings and possible confusion.

Newsletters are constantly updated like the Hot News Pages as events and news is variable and it is important to be as up to date as possible.

The Greenland Art Center will be the place of music, musicians, clarinetists

The below information about the renovation of this historic cultural resource in Hungary is an incredible opportunity for the World Clarinet Community to participate in this project.  Eastern Europe is very rich in music and art as can be seen in major cities as Budapest and other places where the cost of living and costs for fine things is much less than Central Europe.  The Directors of this project are Artist VIP WKA members, Joszef Balogh, and spouse Beatrix, who have been working on the development of this dream for several years, having founded the Windland Foundation, and holding several workshops and Festivals in Hungary.  Mr Balogh is an International Clarinet Soloist and authority on Klezmer and Folk music.  WKA is committed to providing as much Internet assistance to see this project make success.  All members should contact the Baloghs and offer support, as when the time may come when a festival opportunity arises this would be a cumulative reward for all who contributed to it.

The Windland Music Foundation with its Artistic Leader, Jozsef Balogh is pleased to announce its new project and new webpage.

The Greenland Art Center will be the place of music, musicians, clarinetists.

The Greenland Art Center will be in an old palace from the XVIII. century, and its reconstruction will be between 2007-2011.

We will establish also the HANZI in the Palace, the  International Music Institute of Hearing Impaired, who play clarinet also.

We look forward to your support!

Please Send to a Friend! 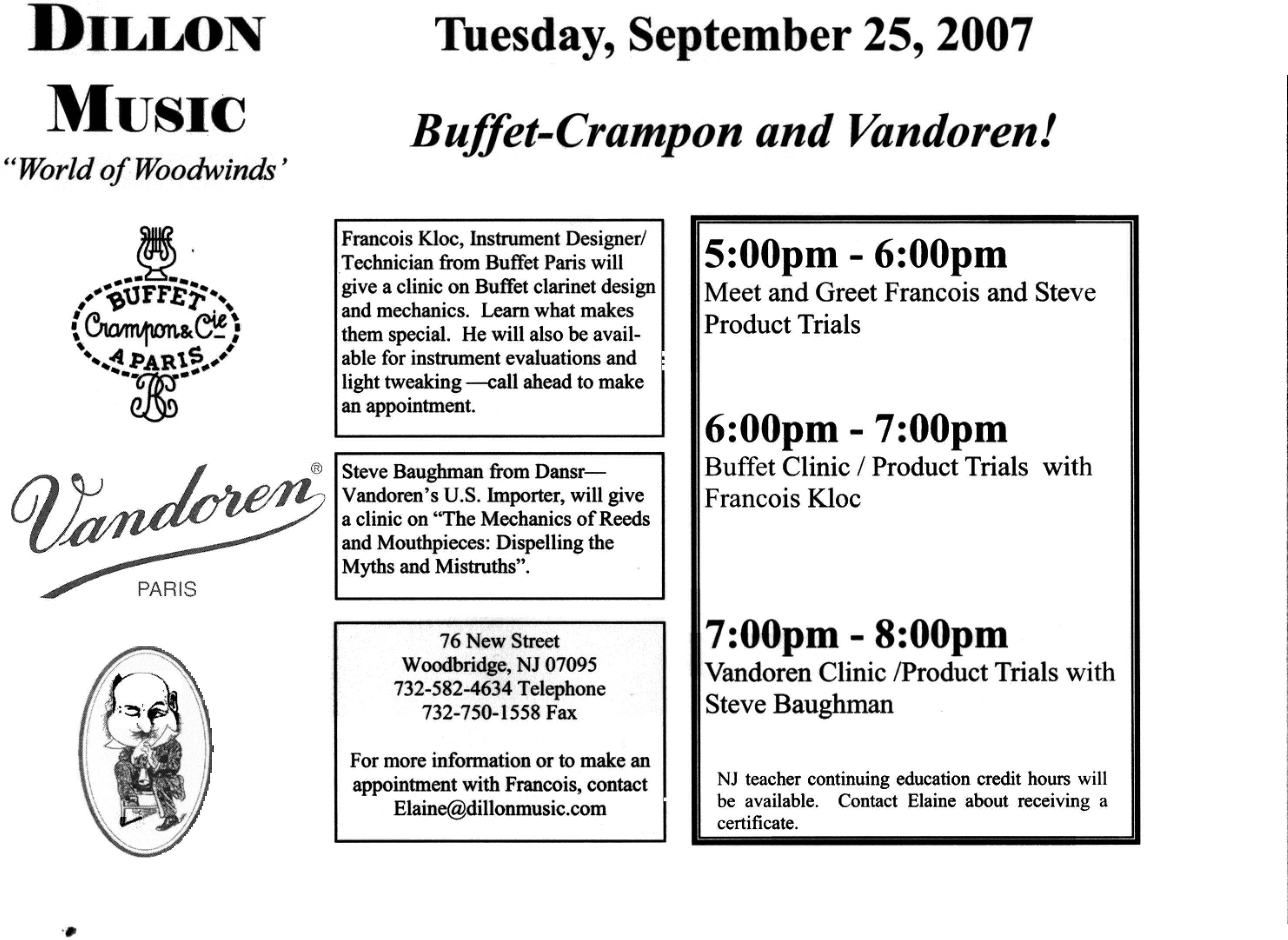 The Young Artist Competition winner appears as the featured soloist with The U.S. Army Band “Pershing’s Own” in Avery Fisher Hall at Lincoln Center for the Performing Arts on Saturday, November 17, 2007 at 2 p.m.

woodwind, brass, and percussion (including harp) instrumentalists in grades

On the heels of two highly successful Buffet/Vandoren clarinet festivals, Buffet Crampon U.S.A and Vandoren have scheduled the third festival in Seattle.  The dates have been tentatively set for October 13 and 14. Vandoren artist and University of Florida Clarinet Professor Mitchell Estrin will again coordinate the performances, master classes and clinics. "We're very excited about this year."commented Estrin. "Based on our success of our past festivals, we expect a great festival.

Clarinet Choir specialist Harvey Hermann, retired from the University of Illinois led the mass choir in a thrilling final concert.

Francois Kloc, Director of Marketing for Buffet Crampon U.S.A. and cosponsor conducted a clinic on the history of the clarinet. "This is an incredibly important event," commented Michael Skinner, president of DANSR, inc,

the Vandoren U.S. importer. "With the success of our past festivals, interest has already begun to grow."

For more information of the festival contact Mitch Estrin

Registration fee: $5 in advance $15 at the door (parents/guardians attend free)

You are invited to attend an exciting afternoon event for Flute, Oboe, Clarinet, Bassoon and Saxophone students of all ages and abilities. Rutgers Woodwind Day 2007 is open to students, teachers, parents and music directors from the greater New Jersey, Pennsylvania and New York areas.  You will meet and work with Rutgers University Music Faculty as well as Rutgers undergraduate and graduate music students. Workshops, master classes, reed making, instrument care/repair and concerts will all be presented in the friendly and comfortable setting of the Marryott Music Building on the Douglass Campus of Rutgers University in New Brunswick, NJ.   Advance registration is $5 or $15 at the door – parents/guardians attend free.

1:00      Introduction - All Participants - Meet the Rutgers Faculty and Guests

4:45      The Audition - How To Do Your Best (Participants perform and work with Faculty)

The day's events, which will begin at 9 AM and run all day until the 8 PM closing concert, will include master classes by some of the top professionals in the field, vendor exhibits from the leading manufacturers of instruments, reeds, mouthpieces and top quality repair people, presentations and demonstrations by vendors on their newest products and a final concert featuring all of the attending professional  artists. 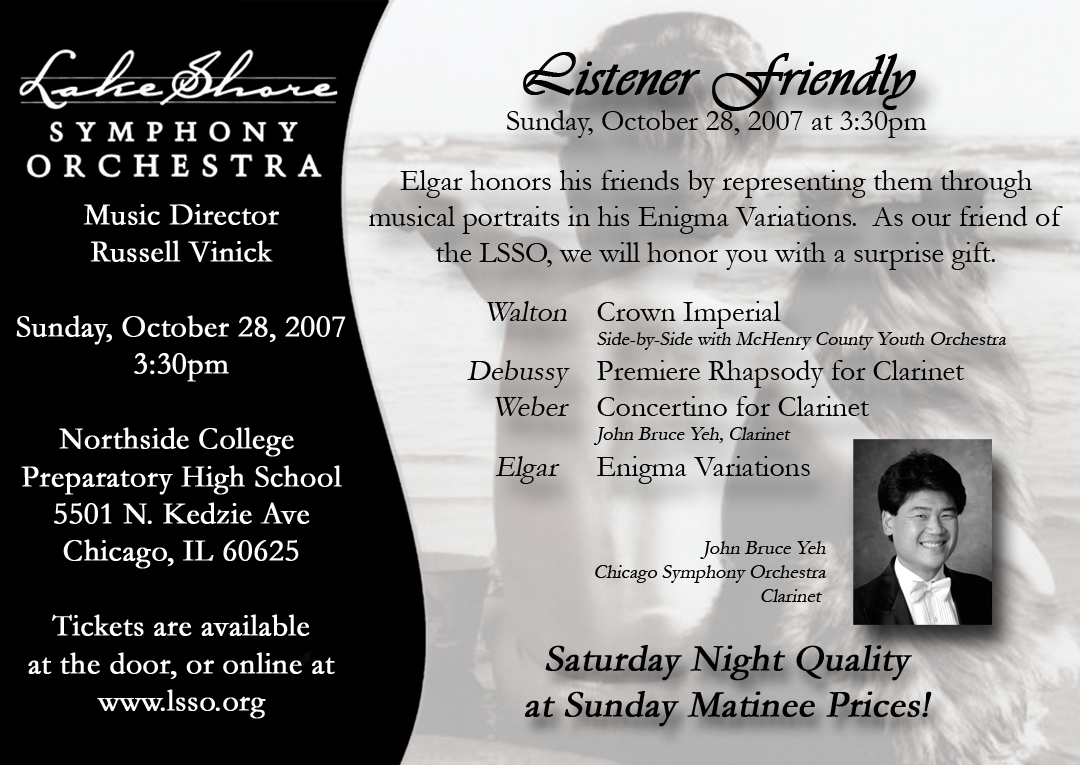 Applications must be postmarked by November 15, 2007 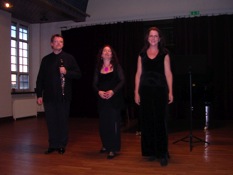 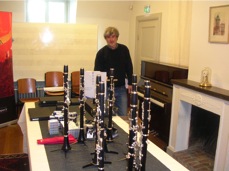 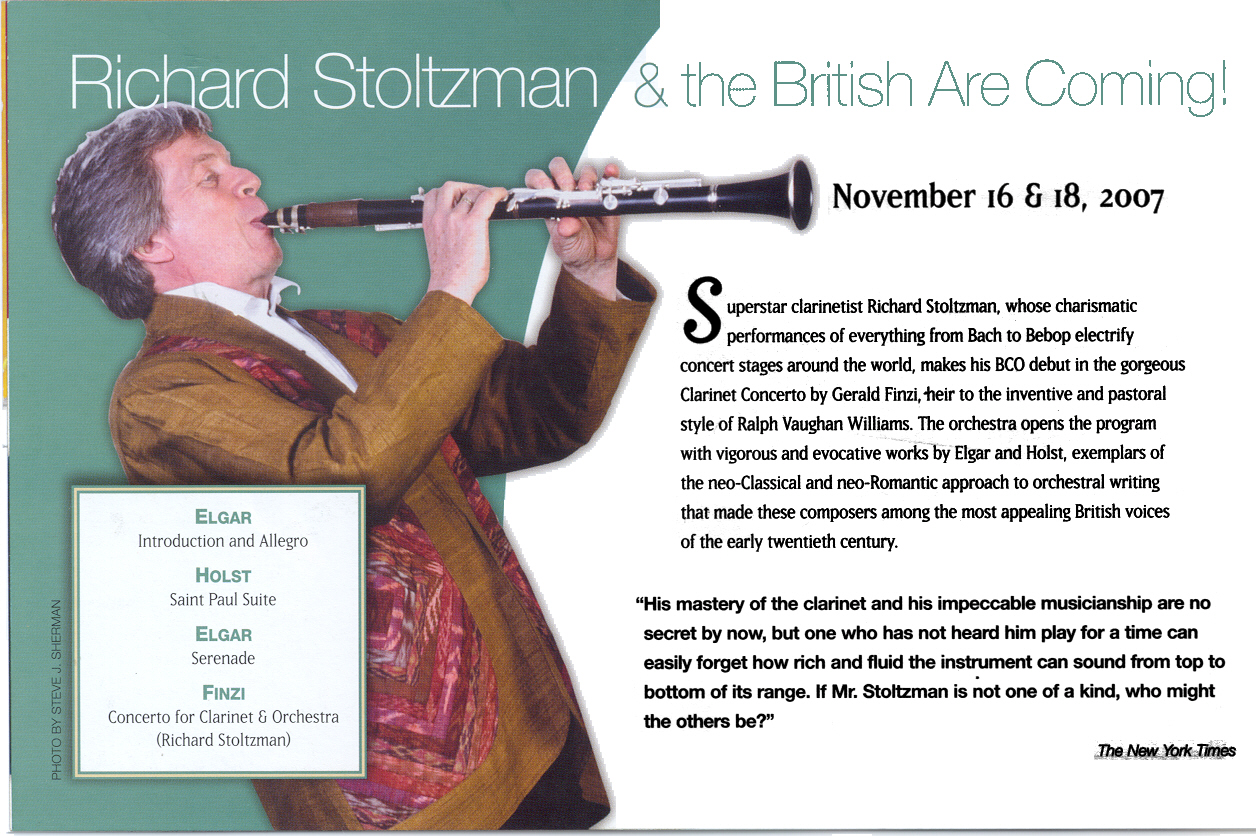