Sample photos from the past year performances and workshops and Festivals

The holiday season is upon us with so many Clarinet events that have just happened, many within days of each other from all points around the globe.   As this Newsletter covers only one month to commemerate this season, with holidays events in progress, especially the Chicago MidWest Band and Orchestra Clinic, and many events that unfold daily.  The quality just this month has been remarkable as one reads on the Hot News Page for this and earlier months.  2008 is a major anniversary year, especially for Schools and artists, notably the 100th year of the Indiana University Jacob School of Music, the 60th anniversary year of Stanley Drucker's tenure with the New York Philharmonic, and of interest, the 30th year of the composition of the Corigliano Clarinet Concerto, written for Stanley Drucker, Leonard Bernstein, and the New York Philharmonic, a very special occasion. It is the 10th Anniversary of the American Chamber Ensemble, who is lead by Naomi Drucker, and giving their anniversary concert consisting of a chronological composite of works unique to this group along with works written for this elite ensemble. Performance date is 22 March 2008 at Weill Recital Hall at Carnegie Hall in New York.  Attached in photo gallery are recordings made by the American Ensemble, with premieres abounding by important American and Long Island composers, many of which will be performed this year.

Of special interest, announcement has been made regarding Grammy Award Nominations, 3 of which to eminent clarinetists, including Eddie Daniels, Sabine Meyer (Nielsen Clarinet Concerto), and Jocquin Valdepenas of the Toronto Symphony.  CD's were released over the past year and worth owning to expand one's interest in their performance. 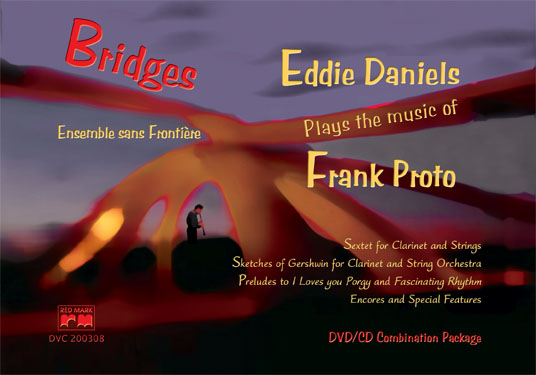 Eddie Daniels and Frank Proto join together with a String Quintet and a 22-piece String Orchestra for two complete programs of new works that bridge the gap between jazz and contemporary classical music. In brilliant performances captured live and in the studio this DVD and CD combination package features world premiere performances of major new works written especially for Daniels: 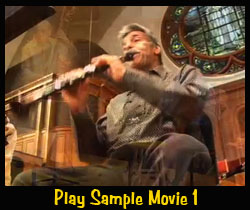 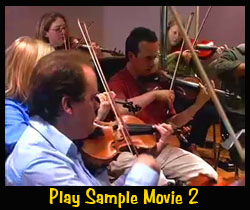 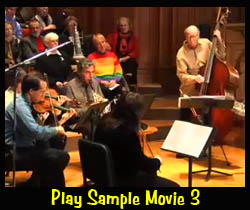 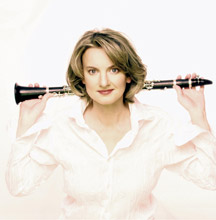 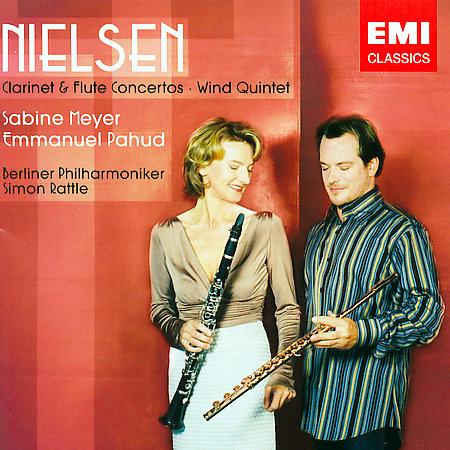 Ben Redwine, jazz clarinetist, has been involved in this creative project with Silent films and adding music of a large venue including jazz to it. He explains the breadth of the project below:

A project that I’ve been deeply involved with for the last six months or so has finally come to fruition and the final product is very satisfying and exciting, if I may say so myself.

A video company out of Chicago contacted me and some colleagues to write and record new music for the soundtracks to 1920’s era silent films of the actor Harry Langdon.  The video company digitally cleaned up 20 Langdon films (some directed by Frank Capra), including his first ever released film, and they produced a documentary on his life, all packaged into a very nice 4 DVD set.  My jazz trio is featured on two of the films and as background to several of the bonus selections (music I wrote).  The other films were scored by my friends who are all great composers from Catholic University.  They wrote me into most of the scores.  One of the composers is a clarinetist, so the film soundtracks are weighted heavily in the clarinet direction.  The scores range from 20’s era jazz to modern classical, so there’s a little something for anyone.

Anyhow, the set is very cool and very professionally packaged.  I’m proud to have been a part of it and I am offering the set for sale through my business.  If you are interested in the set, please let me know.  I can sell them at a discount to friends, so the 4 DVD set is $25 through me, or about $40 from retailers.  Please feel free to forward this announcement on to any of your colleagues and/or students. Please mention when you order if you saw this information from the WKA site and email to me at Ben Redwine.

Eva Margolis-Wasserman, a major soloist and pedagogue in Israel, has released 2 new recordings galleried above.

For clarinet and guitar lovers!
Please share this promo with all your friends!
You may order the CD directly from Leonarda's website. The CD is listed near the top of the index page:
http://www.leonarda.com
Just click on the link to bring up the CD's main page. There you'll find program information and links to performing artists and composers. (You'll also find my other CD listed on the index page.) 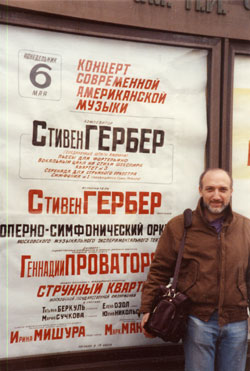 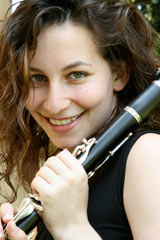 Steven Gerber, a major composer who wrote a major Clarinet Concerto for Jon Manasse and premiered last year, has written a solo work for Clarinet which is innovative, and described below:

Steven R. Gerber’s Duet for Solo Clarinet is available for listening and
download. Its main section is a double fugue - yes, a double fugue for
solo clarinet. You can listen to Peter Furniss’ performance of Duet in
the MP3 streaming section of
http://www.morgensternsdiaryservice.com/WebProfile/furniss_p_1167.shtml#.
The score can also be downloaded at http://www.stevengerber.com/scores.htm.

The composer describes the work as follows:

“Duet for Solo Clarinet was written in 2005 for clarinetist Alex
Fiterstein. It is a one-movement work, about 7 minutes long, in three
sections: Prologue, Double Fugue on Themes by Robert Parris and Yehudi
Wyner, and Epilogue. The Prologue and Epilogue are identical except for
their last note, and they introduce the "duet" concept by alternating
two kinds of material, very fast notes in the lowest register and
lyrical phrases in a higher register. The fugue is also a duet in the
sense that it is in two voices and contains two themes; these themes
come from two composers whose work has meant a great deal to me ever
since I was a teenager.  The first theme of the fugue takes a five-note
phrase from the Trombone Concerto by my teacher and mentor, composer
Robert Parris, and extends this phrase with five more notes. After a
climax, a six-note phrase from the Serenade by Yehudi Wyner (winner of
the 2006 Pulitzer Prize) is introduced and extended, treated fugally,
and then finally combined with the Robert Parris theme. I have tried to
keep the two themes and the two voices distinct by separating them in
register and, sometimes, dynamics or articulation.  Since a clarinet
cannot play two themes at once, the way I have combined the two fugal
ideas is to interrupt one of them with part of the other and then to
alternate between the two.”

Inquiries about Duet for Solo Clarinet can be directed to Jeffrey James
Arts Consulting. Contact them at 516-586-3433 or jamesarts@worldnet.att.net

Steven R. Gerber’s music has gained international attention as a result
of three CD releases (on Chandos, Koch and Arabesque), featuring several
of his major orchestral works, including the Symphony No. 1, Clarinet,
Viola, Violin and Cello concertos and Spirituals for Orchestra. Of the
Clarinet Concerto, the Washington Post wrote, “The world premiere of
Steven Gerber's new Clarinet Concerto... [was] an important musical
event. Written for Jon Manasse,...the evening's soloist, the concerto is
the work of a composer whose idiom is a coherent and logical amalgam of
centuries of musical thought.”

Mr. Gerber has written for a number of other fine soloists including
Yuri Bashmet for the viola concerto, Kurt Nikkanen for the violin
concerto and Carter Brey for the cello concerto. His work has been
performed by groups such as the Louisville Orchestra, Knoxville Chamber
Orchestra, the Fine Arts Quartet, the National Chamber Orchestra and the
Russian Philharmonic. Read the Fall 2007 edition of his Online Update
newsletter, including information about the new release of Spirituals,
(Arabesque CD Z6803) at
http://www.jamesarts.com/releases/oct07/SG_nws_100107.htm. Visit his
website at http://www.stevengerber.com.

He is represented by Jeffrey James Arts Consulting. For a CD sampler of
Steven R. Gerber’s music or more information, contact them at
516-586-3433 or jamesarts@worldnet.att.net.

It is hoped that Clarinetists keep informed through the WKA all the exciting forthcoming events and be active in attending as many as possible to advance themselves, and music in general.

A new event announcement method is now implemented to assist WKA members in their pursual of events. In each quarterly Newsletter segment, the events are posted in date order on those month pages only to avoid repeated postings and possible confusion.  Newsletters are constantly updated like the Hot News Pages as events and news is variable and it is important to be as up to date as possible. 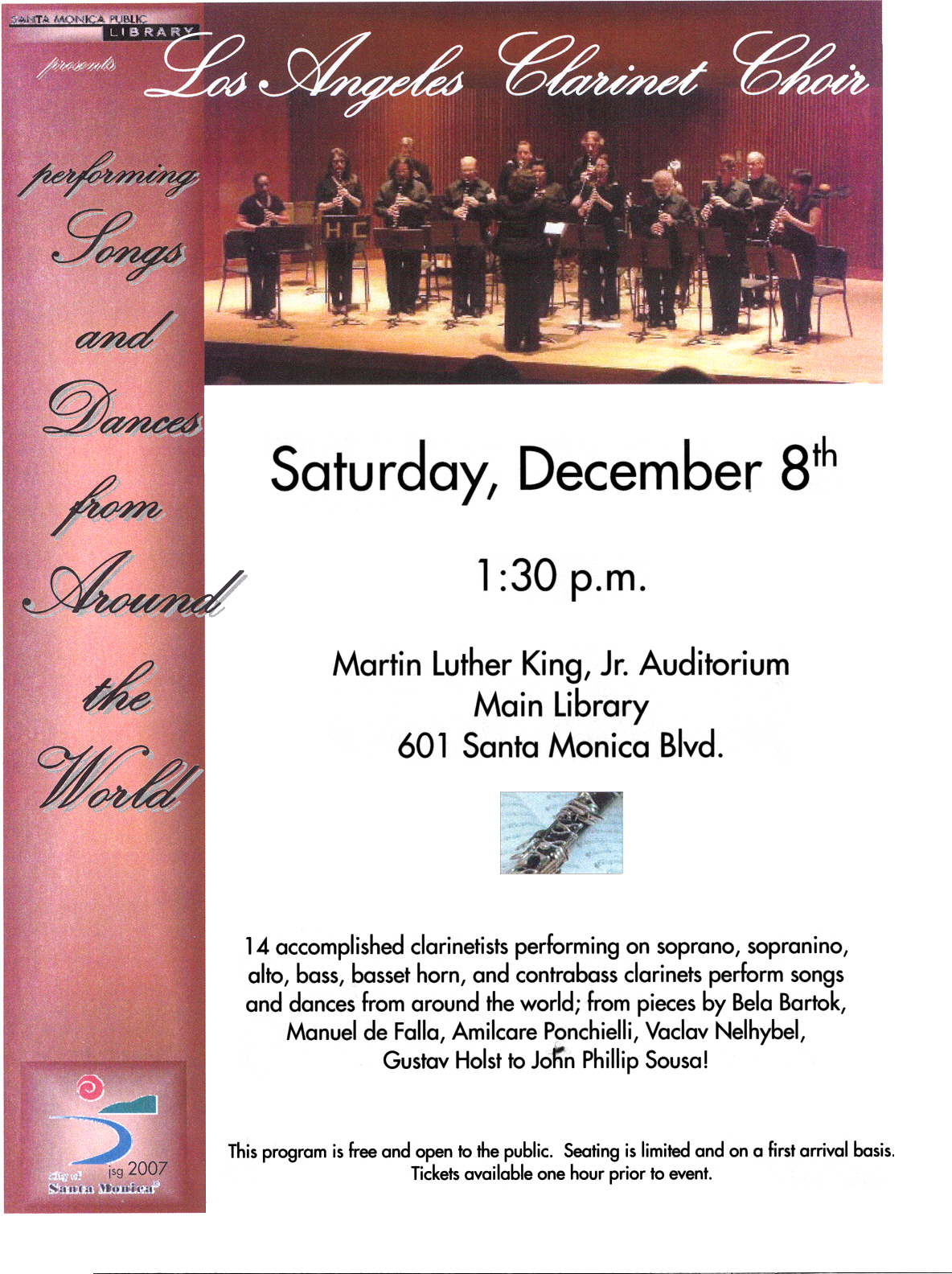 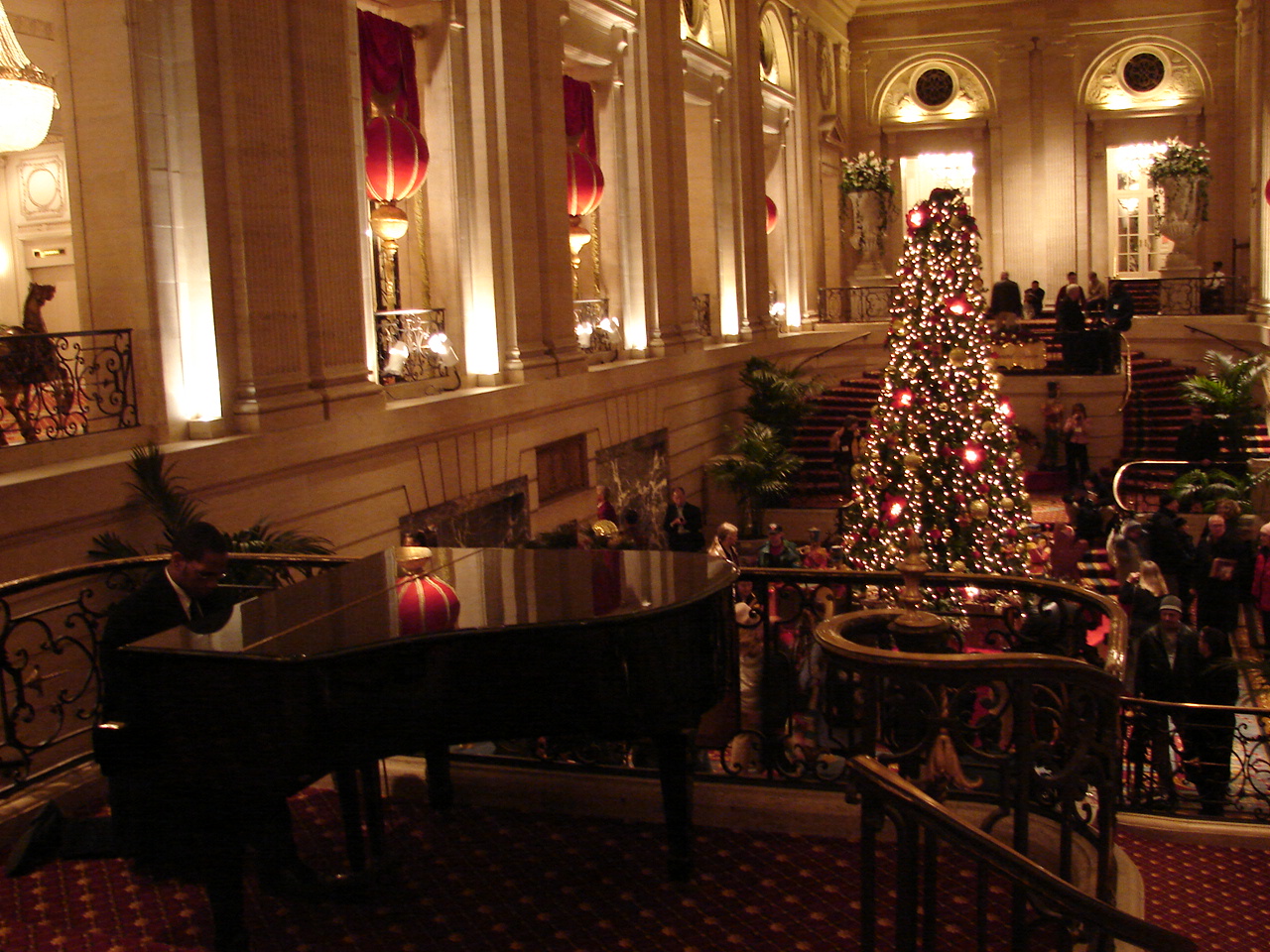 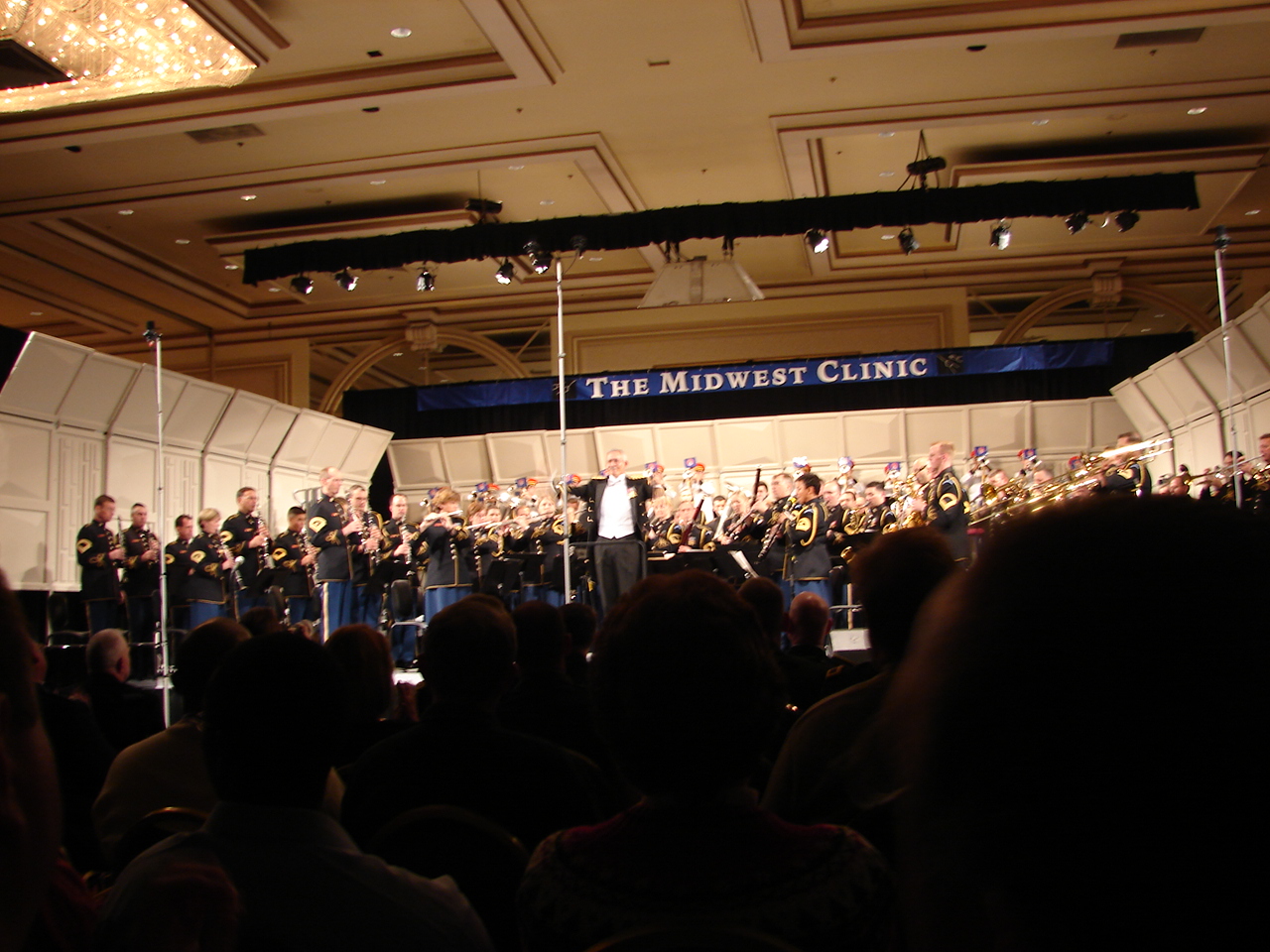