Announcement of Course from April 2014 - March 2015 and subsequent semesters 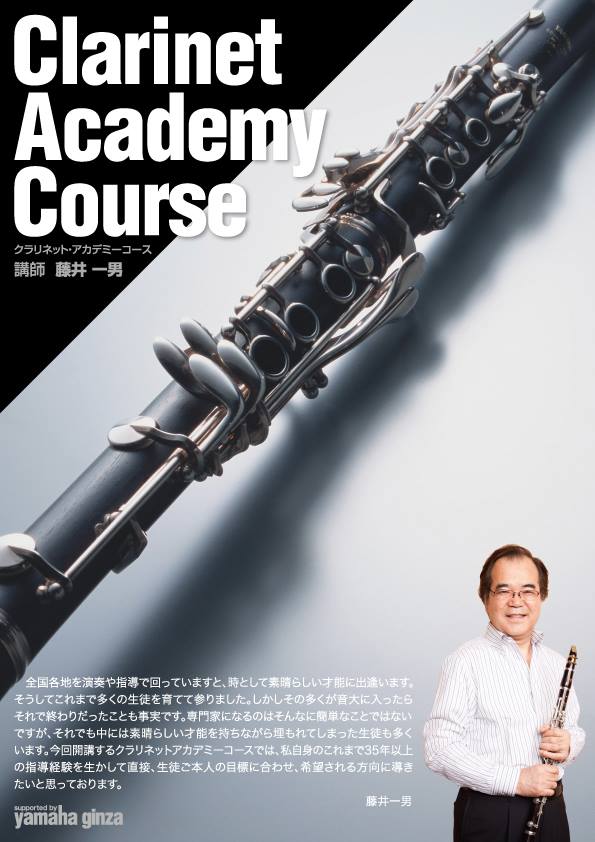 The Clarinet Academy of Tokyo will launch in April 2014!

Students will receive;
① 2 private lessons per week. Total of 70 lessons per year.
② A recital per year.
③ Opportunities to attend at least one master class by world renowned guest instructor per year.
④ Various performance opportunities both in and out of the academy.
⑤ Proper guidance for various competitions and auditions.

Accommodations;
We will assist you with finding apartments for students who need one. Rent is approximately $350-450 per month.

We look forward to welcoming you! 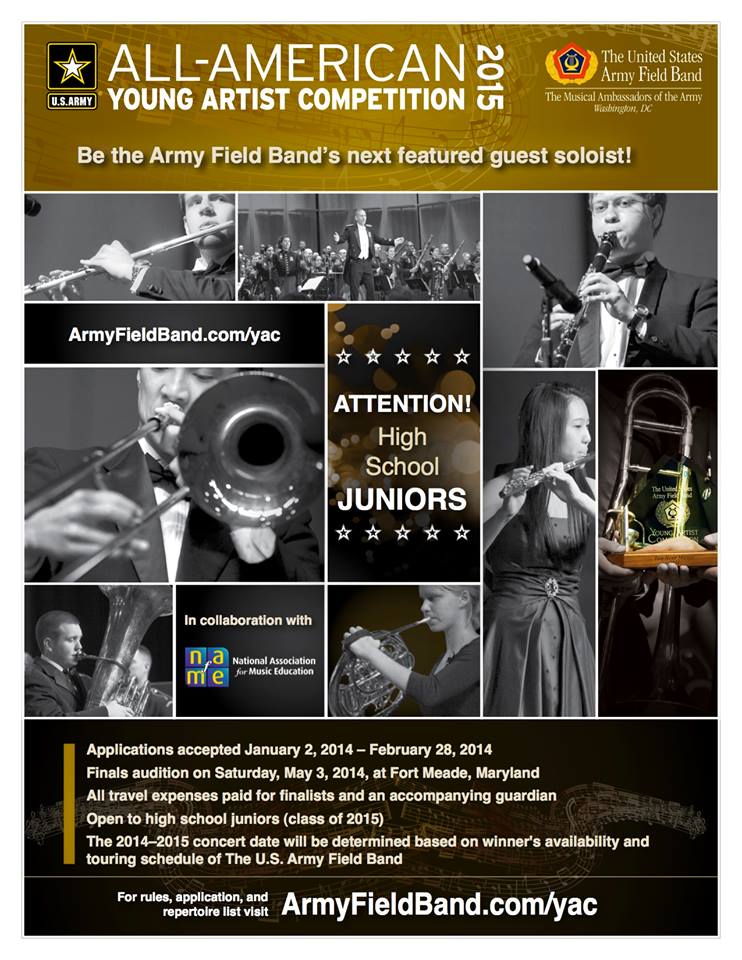 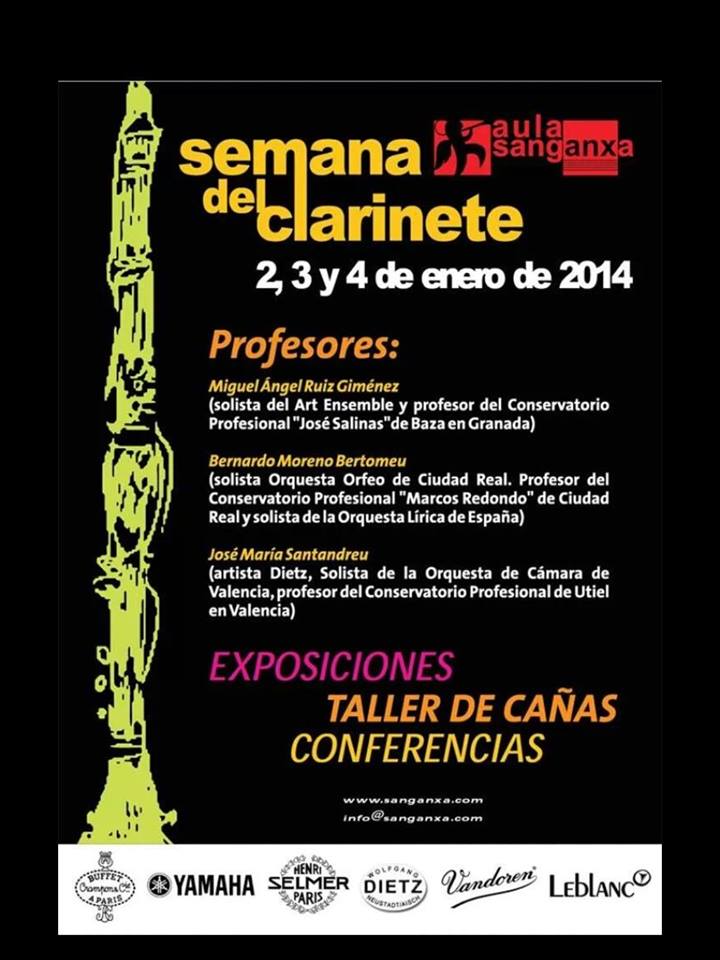 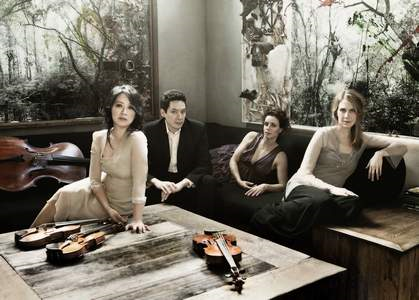 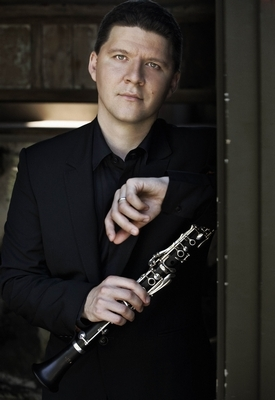 Daedalus String Quartet focuses on exiled composers  In commemoration of the 75th anniversary of the outbreak of World War II, the Friends of Chamber Music of Reading will present the program "Music From Exile" by the Daedalus Quartet, new to this series, and clarinetist Alexander Fiterstein

WCR Center for the Arts

For Reading visit, Daedalus Quartet focuses on exiled composers  In commemoration of the 75th anniversary of the outbreak of World Wr the ar II, the Friends of Chamber Music of Reading will present the program "Music From Exile" by the Daedalus Quartet, new to this series, and clarinetist Alexander Fiterstein.  The performance, Saturday at 8 p.m. in the WCR Center foArts, will focus on works by composers who were forced into various forms of exile by the Third Reich. The appearance of Fiterstein, who is perform ing Paul Hindemith's Quintet for Clarinet and Strings, Op. 30, with the quartet, is sponsored by the Arthur and Beatrice Hammel Jewish Music Series Fund of the Jewish Federation of Reading.

The Daedalus Quartet is made up of violinists Min-Young Kim and Matilda Kaul, violist Jessica Thompson and cellist Thomas Kraines (who performed in Reading in 2008 with his wife, violinist Juliette Kang, in the Friends' Stirling Series).The program will open with "Five Pieces for String Quartet," written in 1923 by Erwin Schulhoff (1894-1942), a Czech pianist and composer of German/Jewish background. Schulhoff was encouraged by Antonin Dvorak, studied with Claude Debussy and Max Reger, and fought in World War I. His works, which included chamber and orchestral music, gained favorable attention, although they were later labeled "degenerate" by the Nazis. When the Nazis invaded Czechoslovakia, Schulhoff was sent to the Wurzburg concentration camp in Bavaria, where he died of tuberculosis. His "Five Pieces" are the most-performed of his works and contain jazz and dance rhythms. Paul Hindemith (1895-1963), one of the United States' best-known composers, was born in Germany, where he was a composer, violinist, violist and conductor. His music was by turns denounced and accepted by the Nazis, but because his wife had Jewish ancestry, he emigrated to the U.S. in 1940.The second half of the program will contain string quartets by Mieczyslaw  Weinberg (1919-1996) and Erich Korngold (1897-1957).Weinberg, a Polish Jew who in 1939 moved to the Soviet Union, lost most of his family in the Holocaust. He was born in Warsaw to a family of musicians (his mother was an actress in Yiddish theater), and he studied at the Warsaw Conservatory. When World War II broke out in Russia, he was evacuated to Tashkent, where he met Dmitri Shostakovich, who influenced his music, along with Sergei Prokofiev, Bela Bartok and Gustav Mahler. He later moved to Moscow, but his music was largely ignored by the Soviet musical establishment. He had to write circus and theater music to survive. Still, he managed to compose 22 symphonies, 17 string quartets, seven operas and more than 40 film and animation scores. Korngold, considered one of the founders of American film music, was an Austro-Hungarian Jew who was fortunate enough to be invited to Hollywood in 1934 by a former collaborator, Max Reinhardt, to adapt Mendelssohn's "Midsummer Night's Dream" for a film. He was invited back in 1938 by Warner Brothers to composer the score for "The Adventures of Robin Hood," starring Errol Flynn. While Korngold was in California, the Anschluss took place, and he stayed in the United States, becoming a citizen and composing countless film scores as well as concert music.

Fiterstein, a native of Belarus who emigated with his family to Israel when he was 2, knows what it's like to live far from home, although in his case it was by choice and in happy circumstances. After studying piano from a young age, he began studying clarinet at age 8 to participate in an after-school wind ensemble with his friends. He took to it, and later began taking a bus from his small town of Upper Nazareth to Tel Aviv to study with an excellent teacher, sponsored by the American-Israel Foundation. At 15, he won a scholarship to study at the Interlochen Summer Arts Camp; then he was awarded another scholarship to finish high school at the Interlochen Arts Academy (both in Michigan).  At 17, he came to the United States - permanently, it turns out - to study at the Juilliard School in New York City.  "It was very hard but also very exciting," Fiterstein said in a recent interview. "I felt like I had to work hard to justify the sacrifice. "Fiterstein has won several prestigious competitions and maintains a successful career as a soloist with symphony orchestras and as a chamber musician. He has worked with composers such as John Corigliano and Osvaldo Golijov, and has had pieces written for him by Samuel Adler and Mason Bates, as well as premiering other works for clarinet. He said he has been performing regularly with the Daedalus Quartet for at least 10 years, the first few times through the Chamber Music Society II at Lincoln Center for emerging artists.Fiterstein said he was drawn to the clarinet after seeing it in various contexts as a child, including "seeing 50 clarinets playing at once during a klezmer music festival. I thought it was the most popular instrument in the world.""At that age," he said, "you don't know the repertoire; I didn't have a clue as to the possibilities. I've found all kinds of pieces, different composers and chamber music in general. I'm very interested in works of this period (early 20th century).  "Fiterstein has recorded Carl Maria von Weber's Clarinet Concerto and concertos by Paul Turok and Sean Hickey; he is the founder of The Zimro Project (an ensemble dedicated to incorporating Jewish art music into chamber music programs); and a member of the Fiterstein-Peled-Goldstein Trio.  He is currently the clarinet professor at the University of Minnesota in Minneapolis-St. Paul. 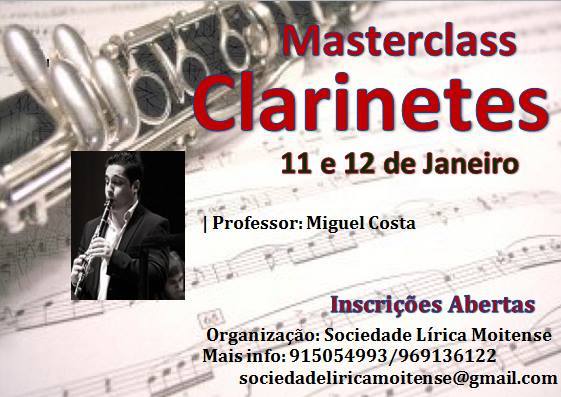 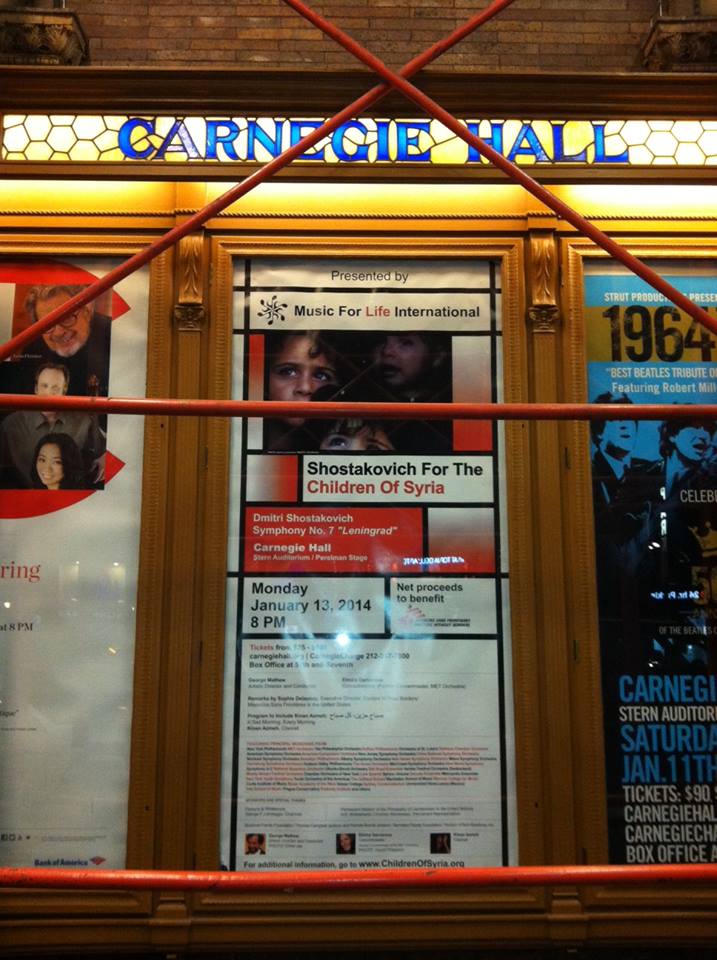 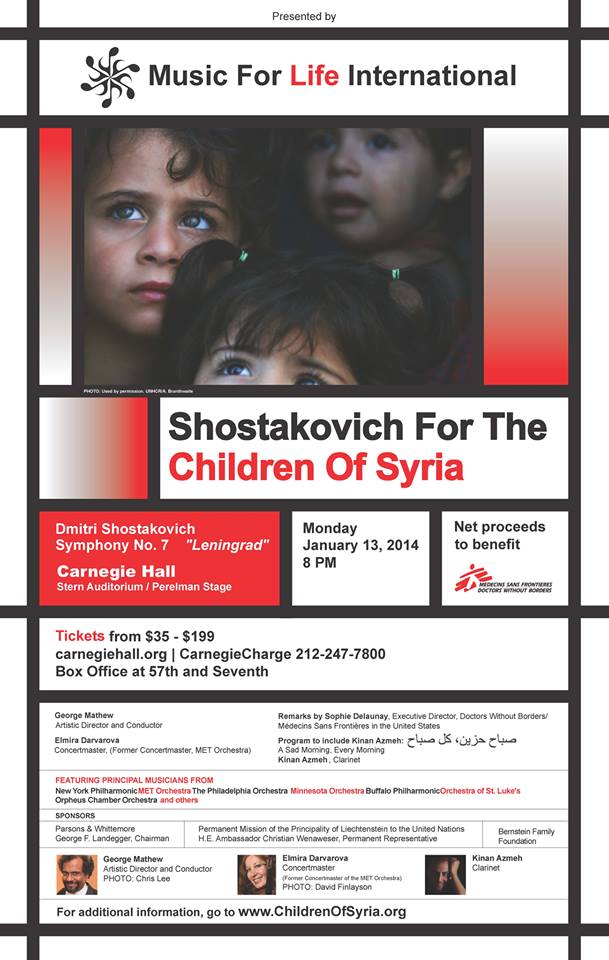 Shostakovich for the Children of Syria Benefit Concert at Carnegie Hall

Syrian refugees need us all.

New York, January 13th 2014, please join Music for life International and Doctors Without Borders in "Shostakovich for the Children of Syria" , a fundraising concert in Carnegie Hall. I am honored to be opening the concert with my composition " a sad morning, every morning" which will be followed by Shostakovich's great 7th Symphony.

A sad morning, every morning:
http://www.youtube.com/watch?v=nD9jbBFKetA

Kinan Azmeh CityBand "Elastic City"  came out on the web in September.
https://itunes.apple.com/us/album/elastic-city/id688814152

"A Play List Without Borders" by the Silk Road Ensemble with Yo-Yo Ma
https://itunes.apple.com/us/album/a-playlist-without-borders/id681270493 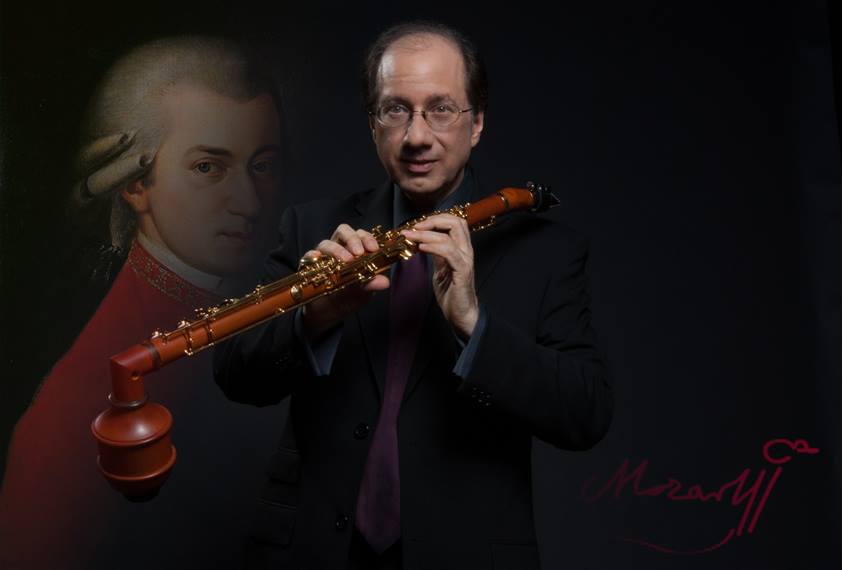 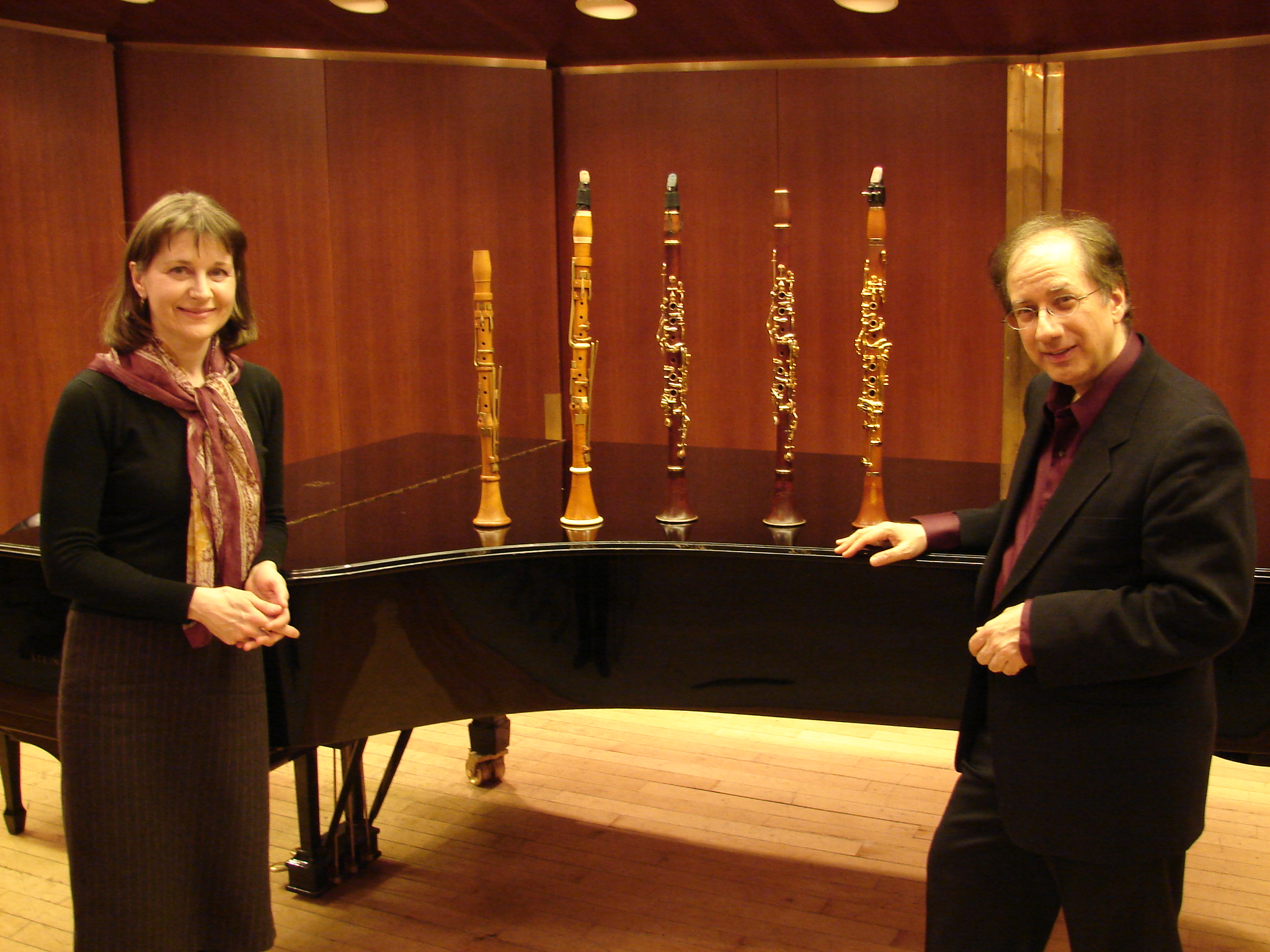 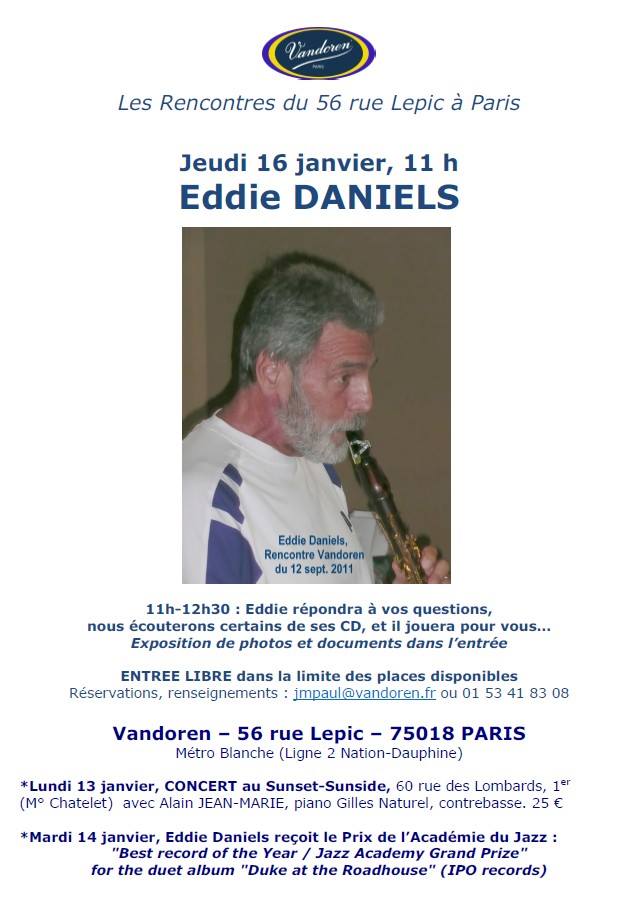 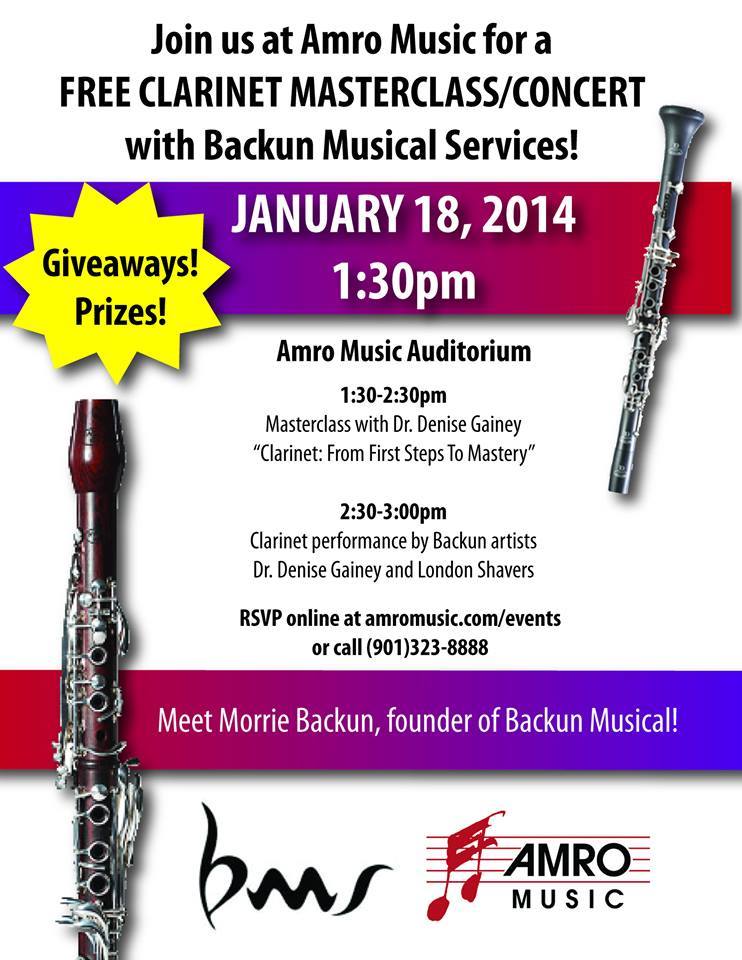 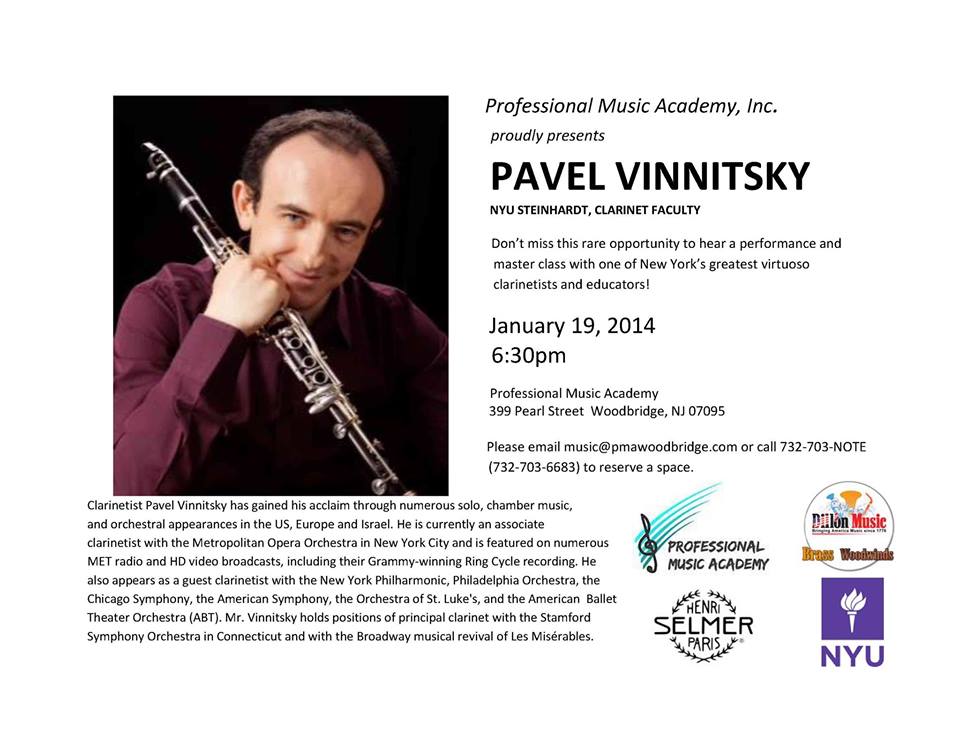 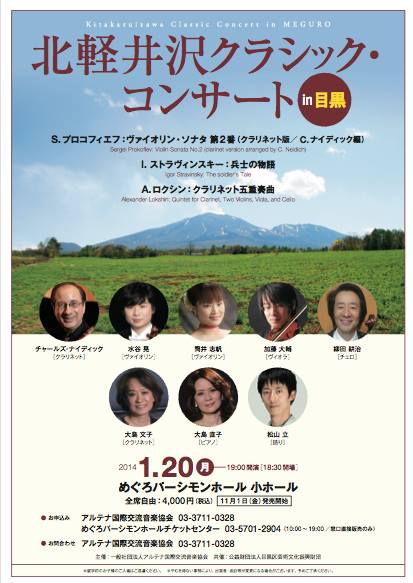 Martin Frost Soloist with the Concerteboeu Amsterdam in World Premiere

Information below in Dutch

performing Clarinettino op. 11 by Ondrej Kukal, the contemporary piece (from 1990), Also on the program are works of 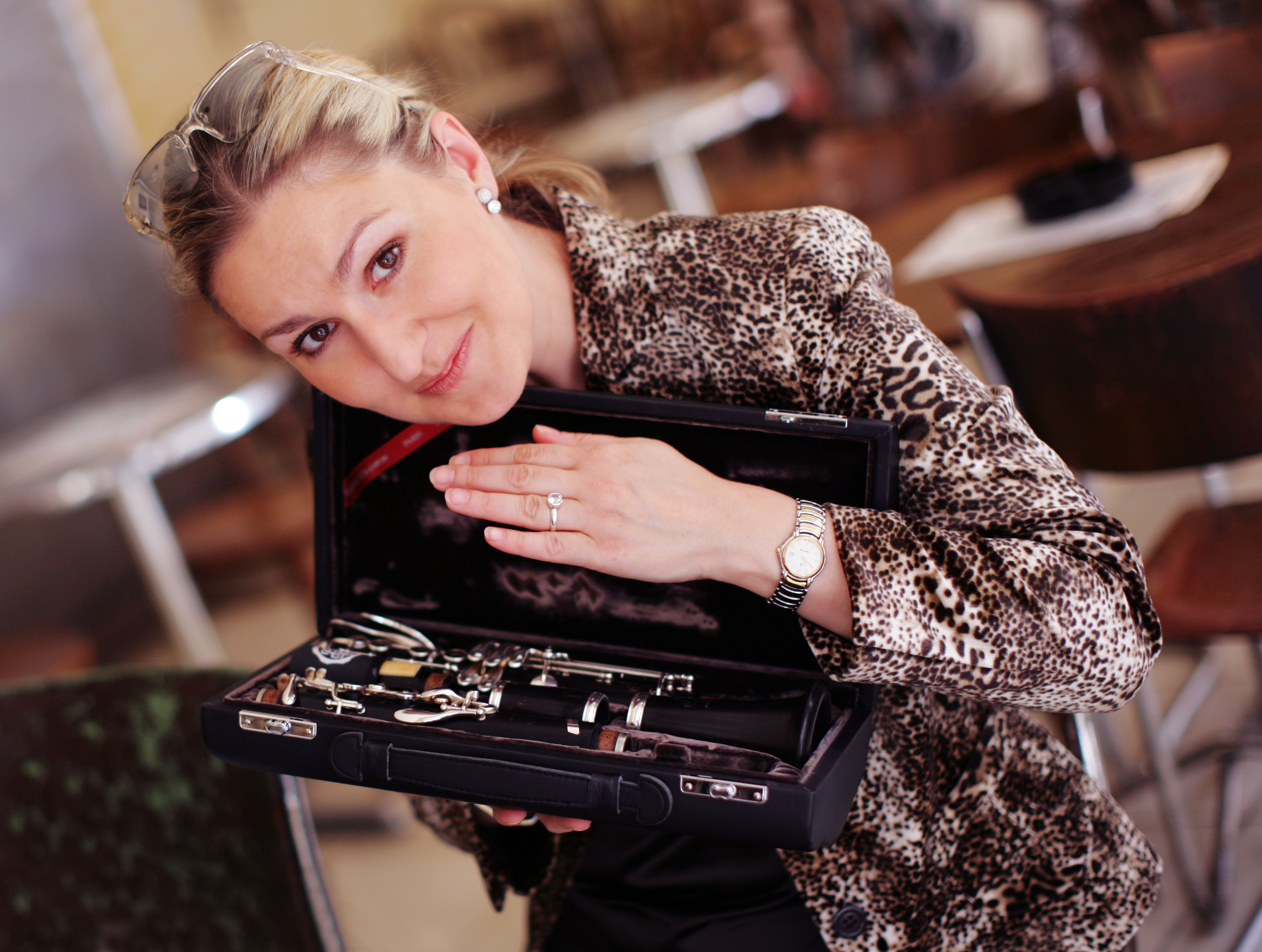 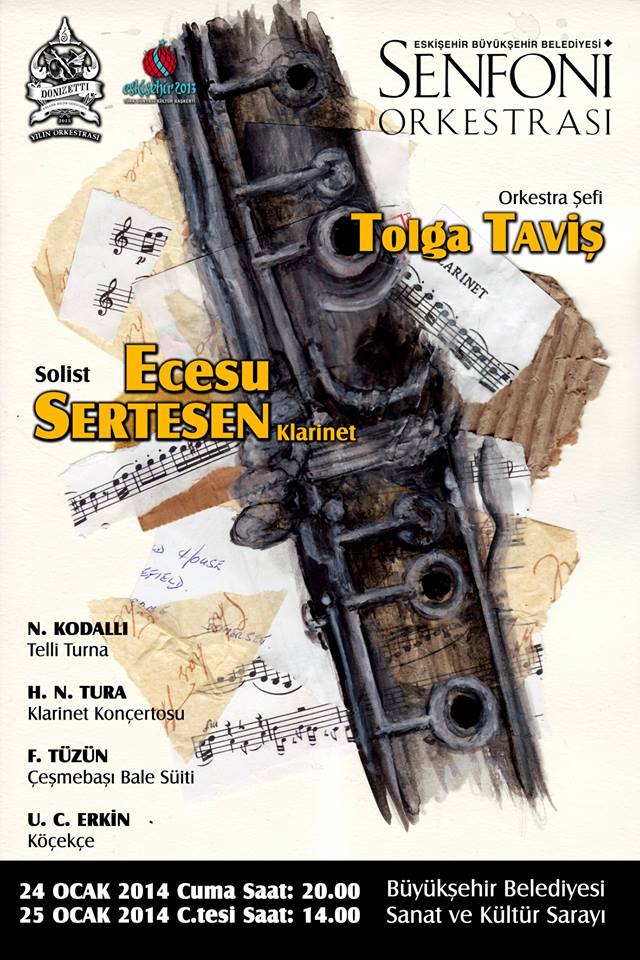 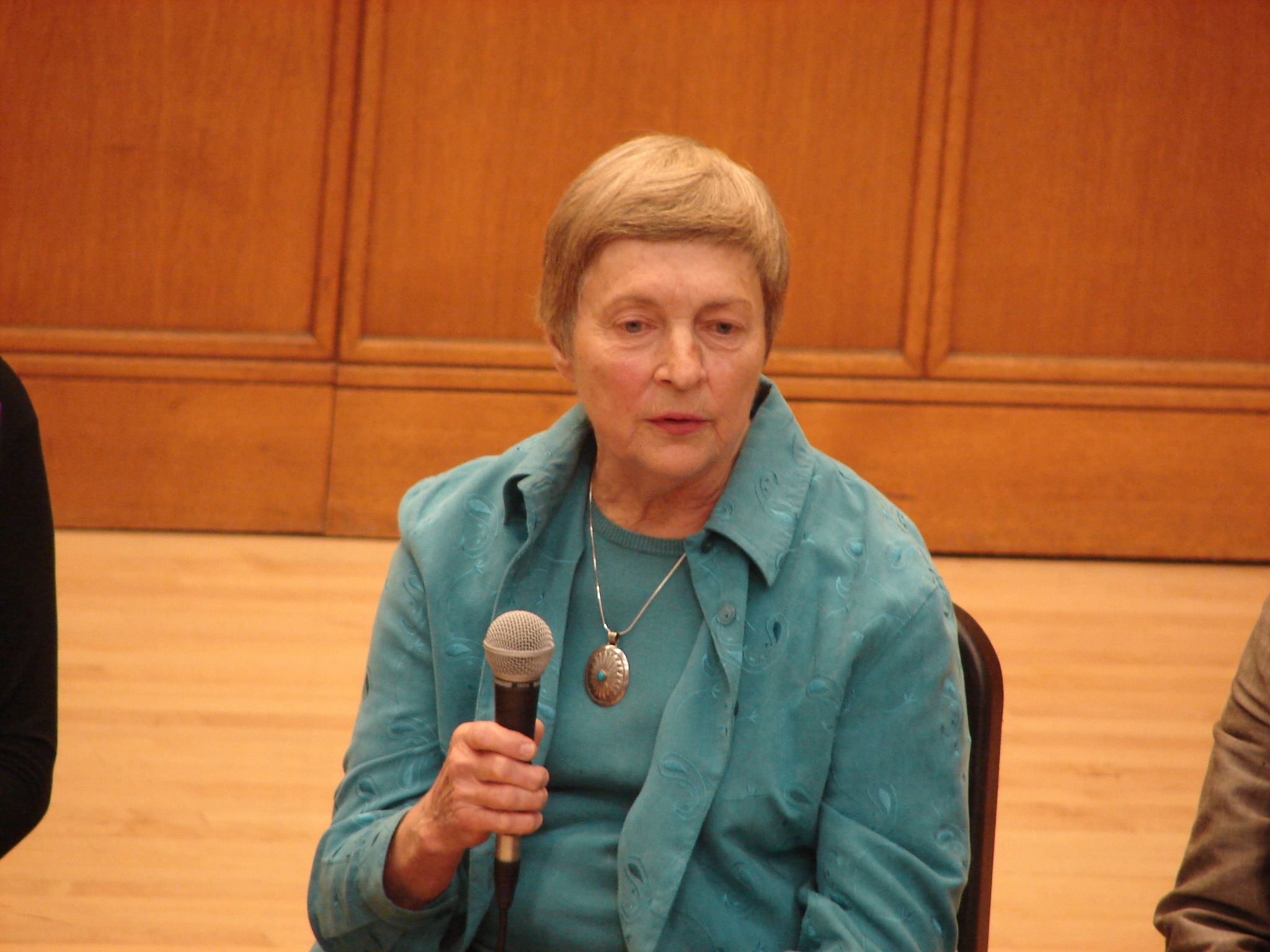 Elsa Ludewig-Verdehr, Distinguished Professor of Clarinet at Michigan State University, will be giving a master class to MSM Precollege Students on Saturday, 1/25 from 10 AM -- 12:30. The class is free and open to the public, so please join us for what I'm sure will be a great experience! 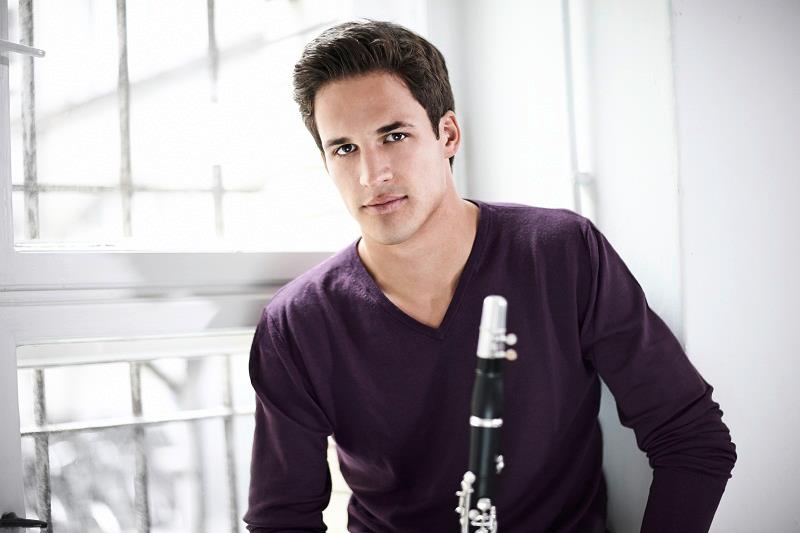 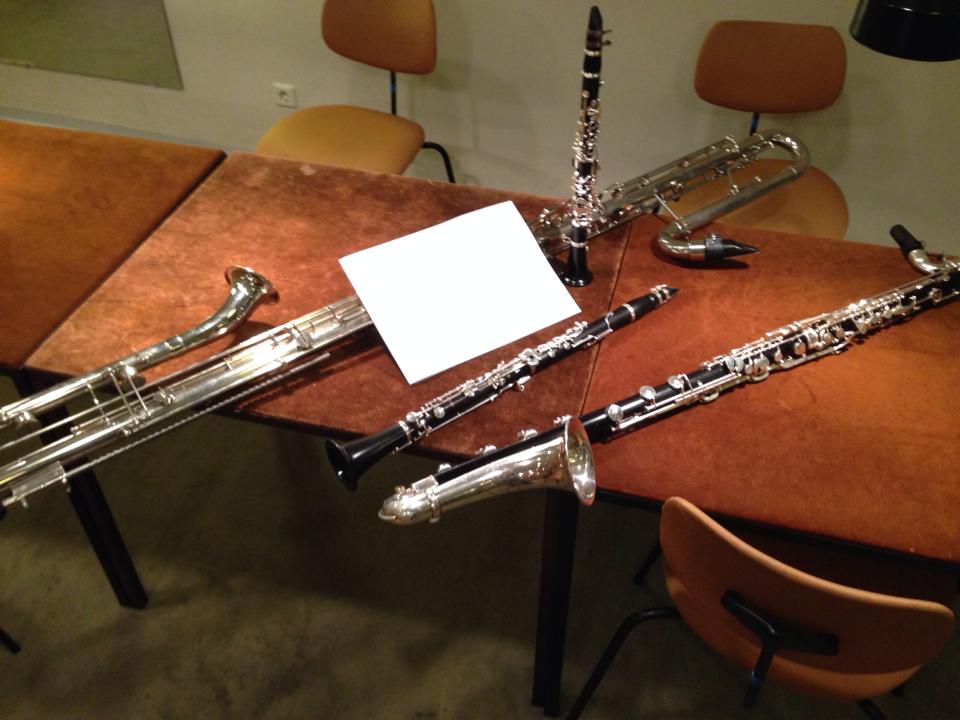 Cello Concerto in B minor

In his second concert with the Berliner Philharmoniker this season the American conductor Alan Gilbert will encounter the Norwegian cellist Truls Mørk, whose playing a critic not long ago described as “angelic grace and purity of tone”. The centre of the encounter of the two musicians is formed by three performances of Antonín Dvořák’s cello concerto. Because of its symphonic structures and enormous technical demands, the work constitutes not only a milestone in the solo literature for cello but also a touchstone for any virtuoso on the instrument. The orchestral composition Kraft by Magnus Lindberg, composed in Berlin in the mid-1980’s, is spectacular in an entirely different way. The piece was inspired by the Berlin punk scene, which Lindberg followed with great interest and whose colossal energy and unusual sound experiments fascinated him. “I was shocked by this music, but also a bit jealous of its force, and I asked myself whether one couldn’t achieve something similar with the resources of a classical orchestra,” Lindberg admitted. What resulted is an exceptional work which, according to Alan Gilbert, one of the most adept conductors of Kraft, has true event character – not least because as desired by the composer (who will be playing the piano part himself at the concerts) the large orchestra making use of unusual sound sources performs distributed throughout the hall. And given its unique architecture the Berlin Philharmonie is predestined for such concepts ... 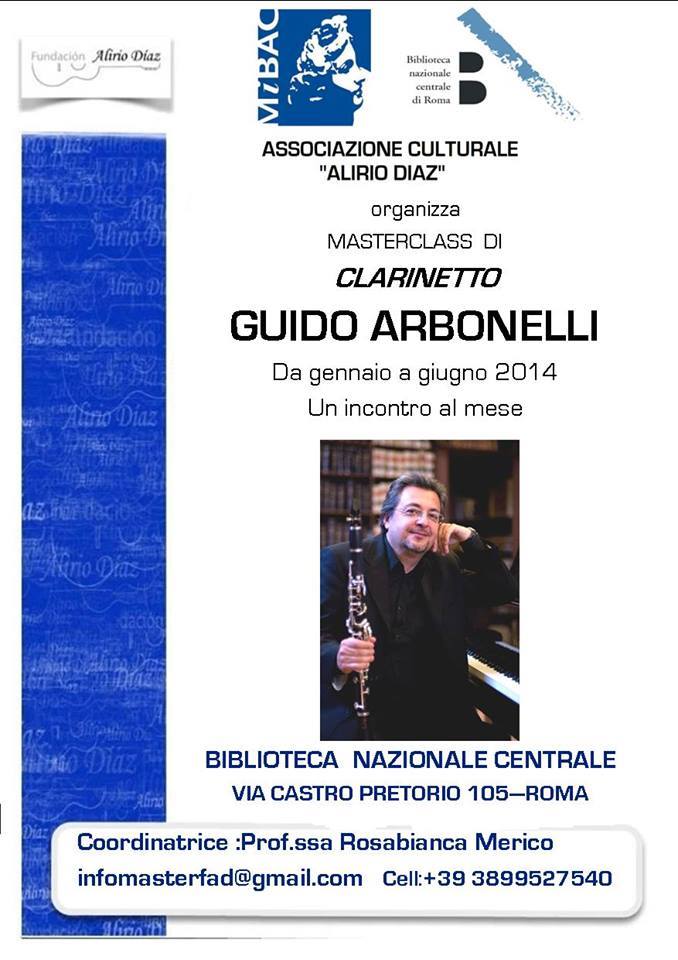 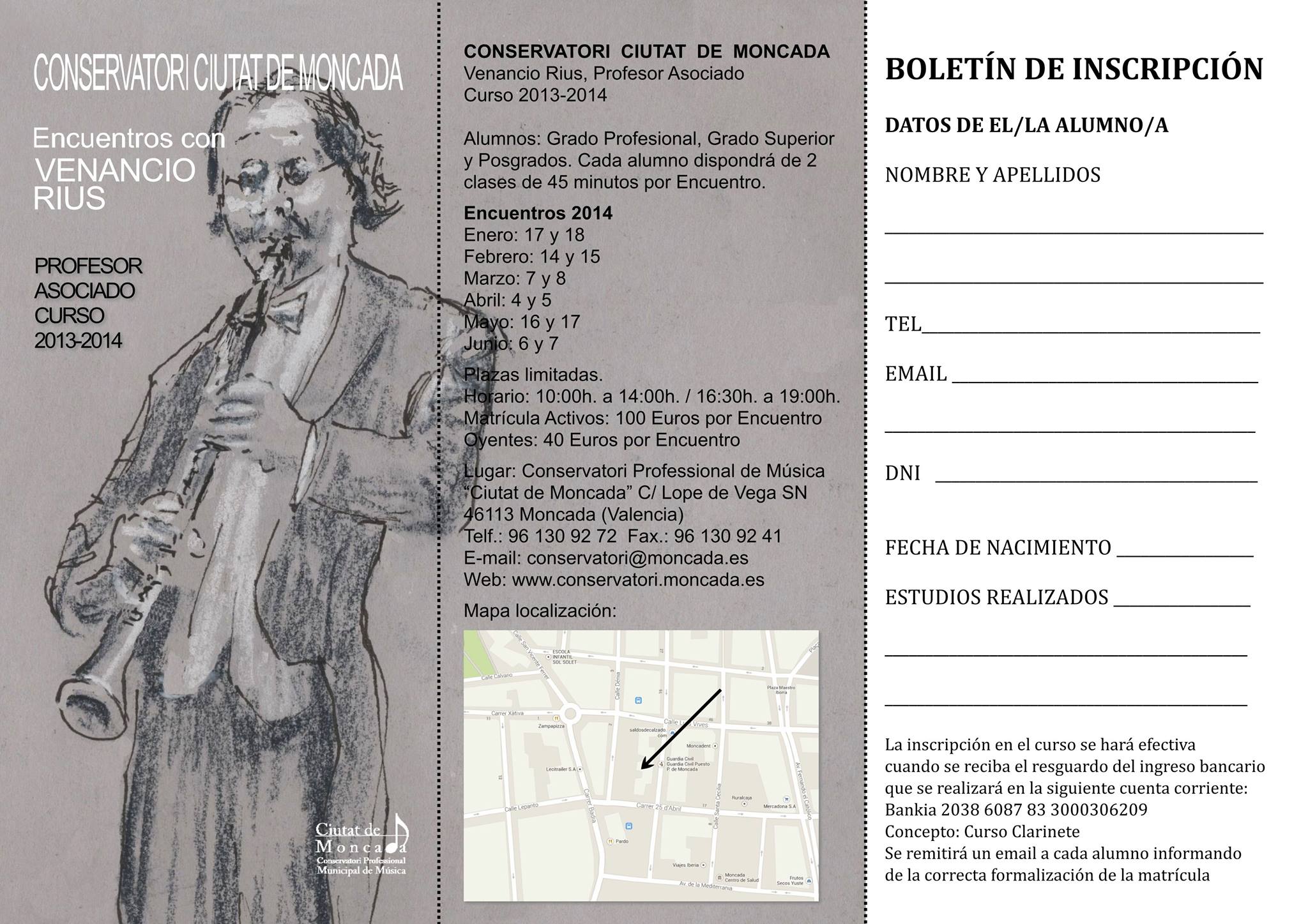