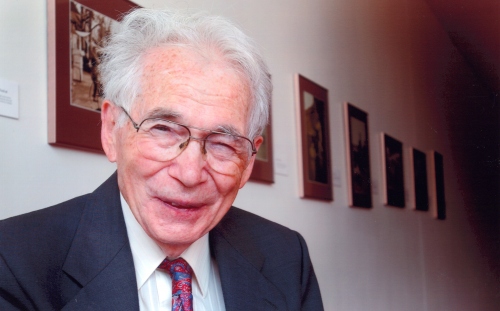 Over the course of his long career, Voxman became one of the nation’s most well known and respected music educators. He was known to clarinetists and other musicians throughout the world through his numerous compilations and editions for wind instruments and bibliographies of wind instrument literature  Many of the familiar Clarinet Methods and Advanced repertoire editions have been the training staple of Clarinetists worldwide from their student beginnings as players.

The Rubank Advanced Band Method, written by Voxman, is still considered a foundational instruction method series. In 2009 he was inducted into the Fine Arts category of the National Federation of State High School Associations National High School Hall of Fame.

During his years at the UI Voxman contributed to the School of Music’s reputation as a premiere music school, served as an advisor for more than 40 doctoral dissertations, and made countless contributions to the Rita Benton Music Library’s collections. His travels to European Libraries during the 1950s and 1960s to procure copies of original manuscripts are the basis for this collection.

It was under Voxman’s leadership that the School of Music received a Rockefeller grant to establish the Center for New Music, which has added another dimension of distinction to Iowa’s School of Music.

Voxman was born in Centerville, Iowa, in 1912, and paid for his education at the UI by teaching clarinet lessons to high school students. In 1933 he received a Bachelor of Science degree with high distinction in chemical engineering. He also received a Master of Arts degree in 1934 and in 1939 joined the faculty of the School of Music.

The Bell System awarded him its Silver Baton, and he held the Honorary Degree of Doctor from Coe College and a Doctor of Humane Letters from DePaul University.

He was a member of the UI Alumni Association and the UI Foundation’s Presidents Club. 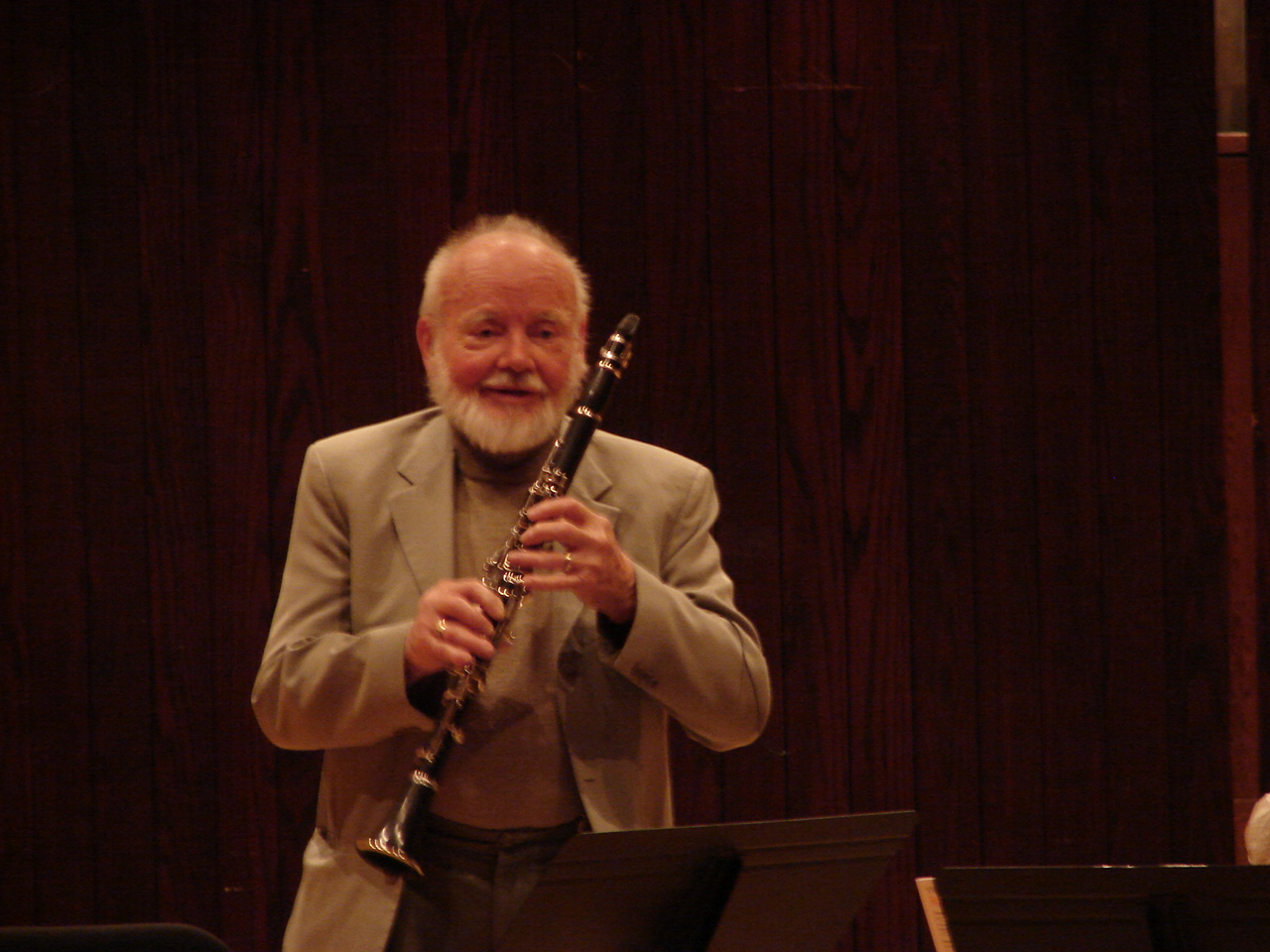 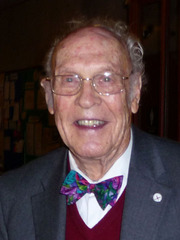 William C Willett -  Clarinet and Saxophone Soloist and Pedagogue; Professor at State University of New York at Fredonia, Indiana University of Pennsylvania, and the Hartt College of Music - In Memoriam

William C. Willett passed peacefully into the unknown on Saturday, May 21, 2011. His wife of 66 years, Louise, and their children Alani, Joel, Peter, and Janice were at his bedside. He is survived by his daughter-in-law, Prof. Pat Somers-Willett, granddaughter, Susan Cline and husband Ernest, and great-granddaughter, Elizabeth, of Austin, TX; as well as Wisconsin brothers, Donald and Bruce. He was predeceased by his son, Mark. He was 90 years of age and still teaching in his home studio and playing in the Simsbury Community Band and the Valley Sax Quartet. Dr. Willett was an Emeritus Professor of the Hartt School of Music, University of Hartford. During his lengthy tenure, he and Professor Conrad Hemond Jr. of the Engineering Dept. developed the first Undergraduate program in Musical Acoustics in the U.S., and initiated the creation of the first Doctorate degree in Music Education at the U of H. Before coming to the U of H, Dr. Willett taught at SUNY (Fredonia, NY), from 1947 to 1967, where he established the 1st university major in saxophone offered in the eastern U.S. It was patterned after the degree program of the Conservatoire de Musique de Paris. During his tenure at SUNY, he conducted the orchestra and developed an outstanding Men’s Chorus and Clarinet Choir. In his later years in the Hartford area, he established the Little Valley Band, specializing in Dixieland jazz style.He also started the Greater Hartford New Horizons Band in 1995; the 75th year of the founding of the Hartt School of Music. He and his wife, Louise, were active members of the Unitarian Meeting House in Hartford for 42 years, where he was Director of Music for 12 years. Bill’s many students over 45 years of University teaching (many of whom are performing, teaching, and composing throughout the U.S.) will miss him, as well as his present students and musician friends. A memorial service will be held on Sunday, June 26th at 1:00 PM at The Unitarian Society of Hartford, 50 Bloomfield Avenue in Hartford. The Willett family requests that memorial donations in Bill’s name be made to the Unitarian Society of Hartford. 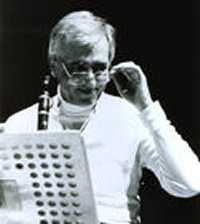 Dieter Klöcker is recognized as one of the finest German clarinetists of his generation. In additional, he is a conductor renowned for his numerous acclaimed concerts and recordings with the chamber ensemble he founded, Consortium Classicum. The focus of Klöcker and his group has been music for winds and strings from the Classical and Romantic periods, with the works of Mozart, Haydn, and Schubert figuring prominently on their programs, as well as those of lesser-known figures like Cartellieri, Ries, Reicha, and others. Klöcker has made numerous recordings -- more than 100 with the Consortium Classicum alone -- and for a variety of labels, including EMI, Orfeo, Novalis, and MD&G. Klöcker also served as a professor of clarinet for more than 25 years and has authored many scholarly articles on music.

Klöcker was born in Wuppertal, Germany, on April 13, 1936. As a youth he studied clarinet with Karl Kroll, then enrolled at the Northwest German Music Academy in Detmold, where his most important teacher was Jost Michaels. Klöcker played clarinet for about a decade in various German orchestras before founding Consortium Classicum in the 1960s. Over the years the ensemble has consisted of about 14 players drawn from the ranks of Germany's most talented wind and string soloists, orchestra members, and university professors.

By the mid-'70s Klöcker and his orchestra had established a reputation as one of the finest chamber ensembles before the public. Among their earliest acclaimed recordings was the 1974 EMI release of Haydn's Six Notturni. In the midst of his early successes Klöcker accepted a professorship in 1975 at the Hochschule für Musik in Freiburg, where he taught until 2001.

Over the years Klöcker led the Consortium Classicum in numerous concerts throughout Europe, the Americas, the Far East, and Australia and also turned out numerous popular recordings. In addition, Klöcker made television appearances with Dietrich Fischer-Dieskau, Hermann Prey, and Helen Donath, and he wrote a number of essays on music in the 1990s.

Klöcker has remained active in the new century in both the concert hall and recording studio. Among his recordings is the 2003 DVD of Cartellieri clarinet and flute concertos on MD&G. Several of Klöcker's earliest EMI recordings have been released by the CPO label, among them the 2006 (originally 1974) Mozart Clarinet Quintet, K. 581, and Stadler Trio for three bassett horns.