A Holiday lovefest honoring Guido Six, Founder and Director of the Claribel Clarinet Choir in Oostend, Belgium, performed a Seminar-Concert at the Annual MidWest Clinic with Soloists and past Associates from the International Clarinet Association - ICA, including Past Presidents and Officers Robert Spring (Arizona State University), Julia DeRoche (DePaul University), Howard Klug (Indiana University), and Julia Heinen (California State University at Northridge), several of whom are WKA Artist VIP's.  As a high-point Mr Six was awarded from the International Music Educators Association for his accomplisments in developing his agenda and goals in his field.  Programs and photos above attest to his contribution to the Clarinet Community.  Of note, he was Director of 2 Clarinetfests in Belgium, 1993 in Ghent and 1999 in Oostend.   A summary of the program is below.

If Johann Sebastian, Wolfgang, Ludwig and the others had known Claribel...

Claribel is celebrating its 20th anniversary at Midwest 2012 (founded in September 1992). This clinic will tell you the story of Claribel’s success during the past twenty years. It is a story of setting the right goals from the beginning, believing in the talent and strength of each member, and believing in the unique power of true friendship and respect for each individual.

Guido Six was just 18 years old when he passed the examination to perform as a military musician in the Band of the Gendarmerie. It was there that he met his predecessor Roland Cardon, eventually following him as director of the Ostend Conservatory in Belgium. Guido eventually became professor of clarinet and pedagogical coordinator. His Claribel Clarinet Choir, which began in 1992, experienced many successes for their performances at international music festivals. Six is also chairman of the Music Association of West Flanderd and continues to organizes his clarinet internship in Oostduinkerke. The Conservatory of Oostende serves as home for the Belgian Clarinet Academy, an international summer course for pre-professional clarinetists. Several world renowned clarinetists join Guido for a fascinating and instructive week in the most beautiful of the Flemish coastal cities each summer.

A remarkable Garland concert for the late great American Dean of Composers of both the 20th and 21st Centuries was held at Paul Hall at Juilliard for an audience of admierers of his music and close friends and associates.   Provost of the Juilliard School Ara Guzalimian gave some heartfelt remarks about Elliott Carter and noted that this concert was pre-planned with Carter before he passed away in November and this performance was not to be regarded as a memorial, but a birthday concert as it would be his 104th birthday.  Total performance of his music which was characterized as very complex on many levels, technical capability of performers, dynamics in personal style and his language which was consistent in all the pieces performed, and a depth of musical concept and delivery.  The concert was organized by VIP Chales Neidich, a hallmark icon at Juilliard who was a very close personal friend of Elliott Carter and champion of his music in which several works were written for him.  A commentary from Charles Neidich is below. 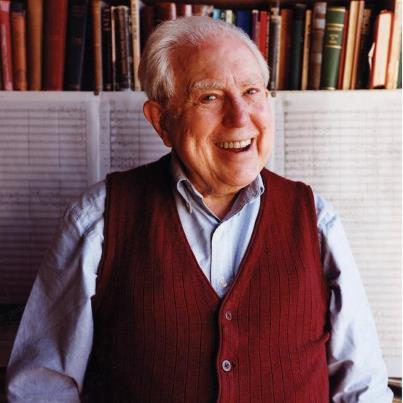 A Link to History

I cannot begin to explain how privileged I feel to have known Elliott Carter. He was my great friend, my mentor, and an inspiration for much I have done in my life. Of course, as someone who cares passionately about classical music, the insight I received and the brilliant musical perspective I came to understand from him was invaluable, but knowing Elliott was more than just knowing the greatest composer of recent time; it gave me a link to history that only his exceptional longevity, his phenomenal memory, his acute sense of observation, and his humanity could offer.

What was most remarkable about Elliott Carter was his perpetual youthful curiosity. Living past the age of 103, he led a life of remarkable productivity, and throughout that life, he never lost his insatiable thirst for knowledge not only musical, but from every field of inquiry and aspect of life. In music, his youthfulness manifested itself in the fact that just about whenever he set about to compose he ended up redefining the form of the composition he was working on whether it was a duet or an opera. Outside of music, his interests were all-encompassing. Our conversations would range from the pronunciation of Homeric Greek to exotic plant species to contemporary politics. He was interested to know about everything from the space-time continuum to the recipes of the various courses of the virtuoso birthday dinners which my wife, Ayako Oshima, would prepare for him and his friends.

In looking back to our wonderful times together, my thoughts turn as well to Elliott’s brilliant wife, Helen, who passed away nine years ago. They were an inseparable couple, and I felt so much of his sensibility was informed by her great sense of taste and incredible perceptiveness.

It was Elliott’s perpetual youth that made his passing at such a remarkable age, while expected, so unexpected. His loss will touch me for a long time to come, but I will carry his influence and vision in everything I do.

A heartfelt 80th Birthday concert for Primo Borali, a well respected Performer icon and former Professor at the Verdi Conservatory in Milan, took place with the reunion array of former students playing in a Clarinet Ensemble Concert.  Luigi Magistrelli, acclaimed performer and teacher at this school, led the ensemble and also performed.  The program presented here and the gallery above attest to the significence of this day.

Music In Midtown at the CUNY Graduate Center ended the fall season 6 December 2012 with a presentation of clarinet compositions featuring the world-renowned clarinetist Charles Neidich, featuring works written for clarinet, basset horn, bass clarinet, and piano. Highlights of the concert included US premiere of Charles Neidich’s Tempest (in a Teapot) dedicated to Elliott Carter and vibrant Quartet by French neoclassical composer Jean Françaix

The Yale University Collection of Musical Instruments presents the eminent Duo of clarinetist Charles Neidich  and pianist Robert Levin on December 2nd and 3rd 2012 Using historical instruments, the performances featured music of Brahms and Schumann as the composers themselves might have heard them. Similar Program performed at Juilliard School 5 December 201212

The Yale Collection of Musical Instruments presented the eminent duo of clarinetist Charles Neidich ’75BA and pianist Robert Levin on December 2 and 3. Using historical instruments, the performances will feature music of Brahms and Schumann as the composers themselves might have heard them.

Levin performed on a piano built by Johann Baptist Streicher in 1869. The instrument is identical to the one Brahms used to compose his works the last twenty-four years of his life. Neidich, who graduated from Yale College in 1975, regularly performs as a soloist, chamber musician, and conductor throughout the world.

The Yale Collection of Musical Instruments, one of the foremost institutions of its kind, preserves and exhibits musical instruments from antiquity to the present. Many instruments are maintained in playing condition and are featured in performances and demonstrations in the fine acoustic of the upstairs gallery, the venue for this performance.

The program was presented twice: Sunday, December 2 at 3 pm and Monday, December 3 at 8 pm. Both concerts took place at the Collection of Musical Instruments (15 Hillhouse Avenue, New Haven).

Hailed by the New Yorker as “a master of his instrument and beyond a clarinetist,” Charles Neidich regularly appears as soloist and as collaborator in chamber music with leading ensembles including the Saint Louis Symphony, Royal Philharmonic, and Deutsches Philharmonic, along with the Juilliard, Guarneri, Brentano, American String Quartets and many others. Known as a leading exponent of period instrument performance practice, he has performed his restoration of the Mozart Concerto throughout the world both on modern and period instruments.

One of America’s leading keyboard artists, Robert Levin is equally at home on the harpsichord, the fortepiano, and the modern piano as a recitalist, concerto performer, and chamber musician. He is also recognized as an authoritative scholar on the Classical and Baroque periods. Robert Levin is best known as a Mozart pianist and scholar. He has written cadenzas to many of the master’s concertos (including the piano, violin, and horn concertos); he has published embellishments of Mozart solo parts; and he has written several reconstructions and completions of Mozart works. His completion of Mozart’s Requiem won wide critical acclaim after its premiere by Helmuth Rilling at the European Music Festival in Stuttgart in August 1991. He has published many scholarly studies, with a special concentration on performance practice.