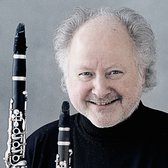 Affiliation with the Berliner Philharmoniker has brought me artistic fulfillment for 22 years. The greatest pleasure in orchestral work for me is constantly learning new things from younger and older musicians as well as the dedication to the music that my orchestra radiates at every concert.«

The music teacher of his Gymnasium presented a clarinet to the class. Walter Seyfarth, then twelve years old, was so enchanted by its sound that he immediately signed up for instruction. Later he studied the instrument at the Freiburg Musikhochschule with Peter Rieckhoff, then with Karl Leister in the Orchestra Academy of the Berliner Philharmoniker. Following his first engagement, in the Saar Radio Symphony Orchestra, in 1985 he became a member of the Berliner Philharmoniker.

Three years later he and his colleagues Michael Hasel, Andreas Wittmann, Fergus McWilliam and Henning Trog founded the Philharmonic Wind Quintet. Walter Seyfarth is active as a teacher in the Berliner Philharmoniker’s Orchestra Academy, with international youth orchestras, and in master classes. His other interests include the visual arts and the theatre, and he also enjoys cooking for his family and friends

Walter Seyfarth (Clarinet) is a native of Düsseldorf and was a first prize winner at the age of sixteen in the Deutscher Tonkünstlerverband competition. Following his studies at the Freiburg Musikhochschule with Peter Rieckhoff and with Karl Leister at the Berlin Philharmonic Orchestra Academy, he was appointed to the Saarbrücken Radio Symphony Orchestra. In 1985, he joined the Berlin Philharmonic as Solo Eb-Clarinettist.