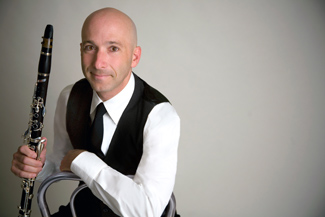 Richie Hawley is a versatile and critically acclaimed artist who ranks among the most distinguished clarinetists of his generation. As Principal Clarinet of the Cincinnati Symphony Orchestra, he has impressed audiences around the world with a wide-ranging talent that blends virtuosity and the velvety, sonorous tone that has become his trademark. The Cincinnati Enquirer has praised him for the "seamless flowing tone so many clarinetists long for and few can achieve," while a Cincinnati Post critic, struck by his electrifying performance of Bernstein's Prelude, Fugue, and Riffs, observed that he "showed once again that he owns far more than chops."

Mr. Hawley was appointed Principal Clarinet of the CSO in 1994 at the age of 23, only two years after graduating from the Curtis Institute of Music. He has since enjoyed a rewarding and multifaceted career as an orchestral clarinetist, recitalist, chamber musician, teacher and clinician.

In solo appearances with the CSO, he has performed works of Mozart, Copland, Debussy, Weber and Bernstein. And in solo symphonic passages, he has left an indelible mark with his ability to weave sound and phrase into atmosphere and mood. Many of the 60-plus albums recorded by the CSO and Cincinnati Pops during his tenure have featured the major solos of the orchestral clarinetist repertoire, including the Nielsen Symphony No. 5, the Shostakovich Symphony No. 10, Debussy's Afternoon of a Faun, Rimsky-Korsakov's Capriccio Espagnol, Resphigi's Pines of Rome, and Gershwin's "Walking the Dog." American Record Guide hailed Hawley's "gorgeous" clarinet solo in the CSO's Rachmaninoff Symphony No. 2 as "the crowning achievement" of the recording by Maestro Jesus Lopez-Cobos.

Mr. Hawley is dedicated to performing chamber music, and appears regularly as a chamber musician and recitalist throughout the United States and abroad. His upcoming chamber music activities include performances at the Music Academy of the West in Santa Barbara and with the Linton Chamber Series in Cincinnati. Mr. Hawley will be a featured artist at the 2010 International Clarinet Association conference in Austin, where he will perform the Brahms Clarinet Quintet with the Enso String Quartet. He made his debut in the Marlboro Music Festival in the summers of 1999 and 2000 and performed with the legendary "Musicians from Marlboro" for the festival's 50th anniversary gala tour. Mr. Hawley has collaborated with such eminent artists as Gil Shaham, Liang Wang, Alex Kerr, Jamie Laredo, Sharon Robinson, Nobuko Imai, Jonathan Feldman and the Enso String Quartet.

As a teacher, Mr. Hawley is highly sought after. He joined the clarinet faculty of the University of Cincinnati College-Conservatory of Music in 1998 and was appointed head of the CCM clarinet studio in 2005. Under his leadership, CCM has become one of the most outstanding clarinet schools in the country, and CCM clarinetists are regularly hired by major orchestras, military bands and college conservatories.

During the summer season, Mr. Hawley serves on the faculty at the Music Academy of the West in Santa Barbara, one of the premiere summer festivals for exceptionally talented musicians from around the world.

As both a performer and educator, Mr. Hawley has been the recipient of several coveted awards. In 1988 his trio, "Trio Con Brio," won first prize at the Coleman Chamber Music competition. That same year he was one of five musicians to receive the Gold Medal as a Presidential Scholar in the Arts from Ronald Reagan in a ceremony at the White House. He has received the Léni Fé Bland Foundation Career Grant twice, and he was awarded the 2009 Glover Award for Outstanding Teacher of the Year at the University of Cincinnati College-Conservatory of Music's convocation ceremony.

Originally from Los Angeles, Mr. Hawley began his clarinet studies with Yehuda Gilad at the Colburn School of Performing Arts at the age 9. He made his orchestral solo debut at age 13, performing Weber with the Los Angeles Philharmonic as the winner of its student stars competition. At age 14 he performed Rossini's Introduction, Theme and Variations on one of the New York Philharmonic's young person's subscription concerts as a winner of the Philharmonic's national talent search competition. And while a student of Donald Montanaro at the Curtis Institute of Music, Mr. Hawley appeared as a soloist with the Philadelphia Orchestra. Mr. Hawley graduated from Curtis in 1992.

A Buffet-Crampon artist, Mr. Hawley performs on the Tosca model of clarinet. He is also a Rico Performing Artist and Clinician and plays exclusively on the Reserve Classic reeds.