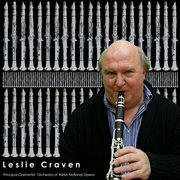 Leslie Craven was born in London in 1953 and began studying clarinet aged seven.

When he was 10 years old he won a Junior Exhibition to study at the Royal Academy of Music Junior Department with Christopher Ball, a former pupil of Jack Brymer, Reginald Kell and Gervase De Peyer – all great iconic British Clarinettists.
At the age of eleven Leslie was invited to play in the London Philharmonic Orchestra in a rehearsal of Walton’s first Symphony. (see article “Orchestral experience” on Leslie’s website)
Whilst a student at the “Junior” Academy he took part in an inspirational master class with the renowned pedagogue Nadia Boulanger, teacher of Poulenc, Copland, Lennox Berkeley, Boulez and many of the 20th Century’s greatest composers.

Later whist studying full time at the Royal College of Music with former L.S.O. principal clarinettist Sidney Fell he had further master classes with Boulanger, Jack Brymer and  Bernard Walton. In his first year he won an open competition for all college instrumentalists: the Lyall Taylor Exhibition, a bursary granted for his entire tenure at college.

At the R.C.M. he also began studying conducting and was very successful, winning the Sir Adrian Boult Scholarship Prize and took part in master classes with Leopold Stokowski.

Later, he won a competition to conduct a professional opera orchestra in Cape Town South Africa. He also won the City Livery Club Prize for clarinet performing and graduated with an Honours A.R.C.M. in performance, gaining one of the highest marks ever recorded.

During Leslie’s very first appointment as Principal Clarinet with an Opera Orchestra (age twenty one) he studied the Italian - opera clarinet repertoire with Maestro Franco Ferraris, (a former pupil of the great Arturo Toscanini and was repetiteur for Otto Klemperer) learning much about the style and tradition of that art form.

Leslie has a vast recital repertoire and has also performed many concertos in countries as distant as America, Canada, South Africa, most of Europe. Some notable Solo T.V. performances include Fantasia: La Traviata (Verdi arranged Lovreglio / Giampieri), the Mozart concerto conducted by Rinaldo Allessandrini with the orchestra of Welsh National Opera. He was also invited to play the obligato to “Parto! Parto!” from Clemenza da Tito conducted by the late Sir Charles Mackerras in a birthday celebration concert for the great maestro with  mezzo soprano Katarina Karnéus – winner of the BBC Singer of the World competition in Cardiff Wales – the biggest singing prize on the planet.
These performances received lavish praise from the press. Leslie has broadcast most of the major recital repertoire for many international Radio and T.V. networks and was nominated for a broadcasting award for his world premier recording of the “Suite for clarinet and piano” by Priaulx Rainier.

During his freelance career in London he was highly sought after in studios, playing on soundtracks for films and for TV series and commercials. Films he played for include “Howards End” (with Anthony Hopkins), “Mickey Blue Eyes” (with Hugh Grant), The “Pope Must Die” (with Robbie Coltrane), “The Wicker Man” (original version with Britt Ekland and Edward Woodward), “The Pirate Prince” and many more.

T.V. series include amongst others; “House of Eliott”, “Soldier, Soldier”, “Anna Lee”, the Michael Aspel show and Wogan. He appeared also on the sound track for the background music to the Barcelona Olympics with Placido Domingo and Sarah Brightman.
He also played for West End Shows such as Phantom of the Opera and was a member of the chamber ensemble (hand chosen by Michael Reed - Andrew Lloyd Webber's former executive musical director) for Aspects of Love and featured on the cast albums and compilation discs of most of Andrew Lloyd Webber's musical hits.
Leslie also recorded for many commercials including: Ribena, Levi jeans, Renault, McDonalds, Lindt chocolates, Ariel, Cheerios and many other household names.
As well as numerous classical and operatic orchestral discs he also recorded backing tracks for Charlotte Church, Cilla Black, Michael Ball, Michael Crawford, Barry Manilow, Rod Stewart, The Pet Shop Boys, Richard Clayderman and many others.

Recently he has joined forces with members of the Greenwich Trio – the virtuosi: cellist Stjepan Hauser and  Yoko Misumi to record much of the popular the Trio repertoire for Clarinet Cello and piano including works by Brahms Beethoven Bruch and Nino Rota in that composer’s centenary 2011 - Dinmore Records DRD 225 from www.lesliecraven.co.uk

Picture below : Leslie, with virtuosi: Stjepan Hauser and Yoko Misumi with whom he recorded trios by Beethoven Brahms Bruch and Rota. Stjepan Hauser recently had huge success with “crossover / cover” songs by Michael Jackson and was signed by Sony records to record several albums of music for “2 Cellos” with Luka Sulic. He was also invited to tour with Elton John, appeared on the “Ellen show” in Los Angeles and has had over 5 million hits on various websites showing his “pop” videos of “2 Cellos”. See www.Stjepanhauser.com Picture below : Leslie with Stjepan Hauser and Yoko Misumi at Wyastone concert Hall (Nimbus studios). 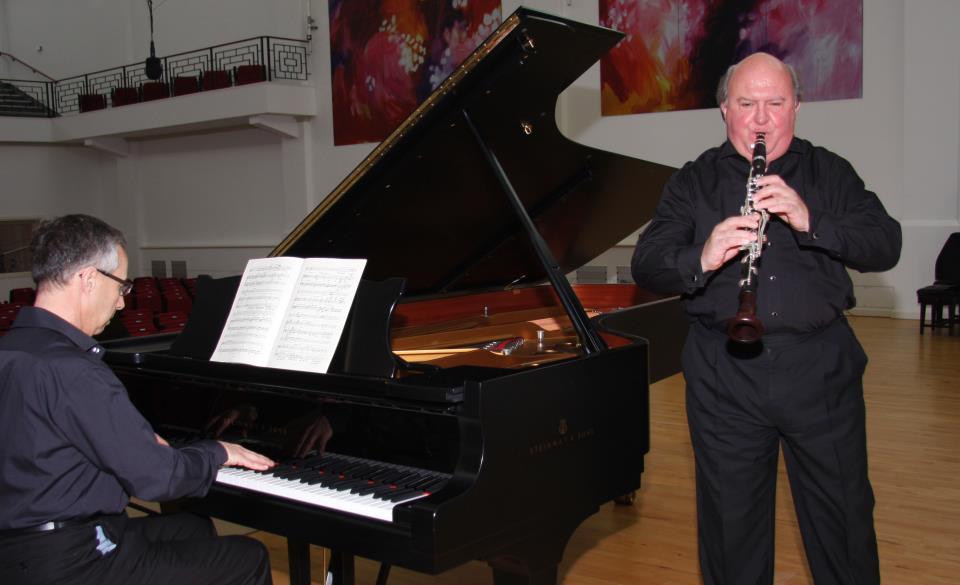 Leslie has also recently been partnered in recitals by Michael Pollock (who has accompanied many of the world’s greatest musicians  including Bryn Terfel and Dame Kiri Te Kanawa).

In December 2010 they recorded the Brahms Sonatas, the Sonata by Nino Rota (composer of the “Godfather” scores) and several other major works on the disc Rota Centenary Dinmore records DRD 224.  In the same week Leslie recorded the trios disc with Stjepan and Yoko. 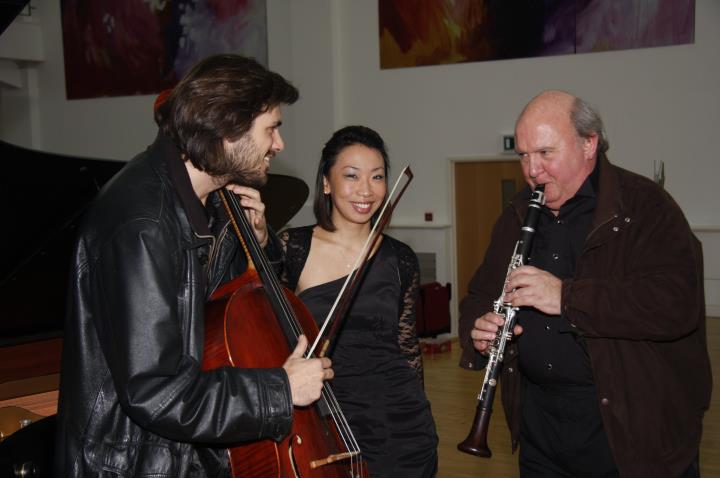 (Picture above : Leslie and Michael Pollock recording at Nimbus studios.)

Leslie Craven is also featured on solo discs and numerous chamber music recordings. A number of works have been written especially for and dedicated to him – notably, many of the works on the “Expressions” disc of lyrical contemporary pieces and the Concerto for clarinet and strings by Christopher Ball (See CD page in “Products” category on this site).

Other Concertos written for and dedicated to Leslie are : Roma Cafolla - Concerto and “Pied Piper” Concerto by Vasco Hexel.

Leslie also designed his own brand of clarinet mouthpiece which is manufactured in the United States exclusively for Leslie (by Bradford Behn, possibly the finest mouthpiece craftsman in the world) and is sold from his website and used by many of Britain’s leading players and various clarinettists all over the globe.

The mouthpiece delivers a focused yet flexible sound, clean staccato and secure intonation with

excellent legato and ease of production, particularly in the high register.

Leslie assists clients to select the mouthpieces and offer useful advice and helpful suggestions on how to improve the sound using his design. He is also happy to make minor adjustments and repairs to mouthpieces provided the damage / wear is not extreme.

His own mouthpieces can be customised in his studio in conjunction with the client to get the ultimate playing experience for the clarinettist. www.lesliecraven.co.uk

Leslie’s work as a teacher and pedagogue is known internationally and he is considered one of Britain’s foremost teachers of clarinet as well as one of the most exciting players in the English style.

Leslie gives lessons at the Royal Welsh College of Music and master classes throughout U.K. in most of the major teaching establishments and has written a teaching/playing treatise on the clarinet which is recommended reading on the ABRSM Diploma Course reading list .
Leslie also designed his own brand of clarinet mouthpiece which is manufactured in the United States and is sold from his website and used by many of Britain’s leading players and various clarinettists all over the globe.