Kinan Azmeh, a unique Clarinet talent and graduate of the Juilliard School in New York, and a composer of music

for this venue, brought this He War ensemble on tour in the USA with Washington as one of the performance stops

on an extensive mapping of several places; information on Newsletter Page.  The Band comprises all Syrian musicians

Mreysh, drummer, Khaled Omran, Double Bass, all of whom are alumni of the Syrian National Orchestra in Demascus.

The members do not now live in Syria, which broadens the cultural musical base.

The idea behind He War is to transcend cultural barriers, disparities, and misconceptions, and establish a civilized

communication which builds on what brings people together. All this is achieved by musical exchanges between

is musically based as well as politically based.   The venue includes elements of Arabic, jazz, classic, opera, making it

The performance here was almost instinctive in their communication.  There was no music on the stands and it was

like an improvised floating of music of their styles.  All performers were top class and inner communication was as

if in one voice.  Kinan Azmeh composed many of the pieces performed here tonight. 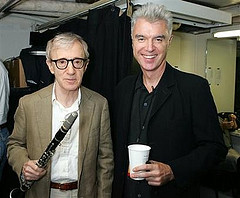 and just about every other kind of winner share a single stage.
But a benefit for Hurricane Katrina relief efforts, sponsored by The New Yorker as part of its annual New Yorker

Festival, brought an eclectic and star-studded cast of performers to Manhattan on Saturday night. The lineup included

Newman's "Louisiana 1927," a song from the mid-1970's that sounds as if it could have been written about Hurricane

editor David Remnick said many of the performers were still searching for relatives missing since the hurricane.
Tickets for the event ranged from $50 to $250, with all proceeds going to the American Red Cross. Conde Nast

Publications, publisher of The New Yorker, will matched the donation. Over $250,000 was raised to support the efforts.
Allen Touissant, a legendary New Orleans pianist, summed up the night: "If you'd like to know how to get from

the Big Apple to the Big Easy, take Highway Love, and you'll get there." posted by Woody Allen Band at 5:42 PM

A special packed weekend was held at this unique quality campus during this annual weekend,

home of the School of Music.  Of interest to many unfamiliar with this College, the Music School is

one of 3 major institutions within the State University of New York system, the other 2 at Potsdam,

and Purchase.   Facilities here exceed qualitatively that of schools 3 times the price for a quality music

education with a matching faculty.  Being in a strategic location between Buffalo and Cleveland,

opportunities to connect with the Orchestras of both cities is possible.  Being in a small town makes

have a quality education from undergraduate to Masters level.

musical areas in communicating through the horn, and using basic literature in covering it, such as the

and Grant performed a solo Bach Fantasie arranged by Stanley Hasty, Professor Emeritus from the Eastman

School.  As with so many classes held in many places, emphasis by students and teachers should fully cover

the issues of proper tone production, getting out of the shell and use the clarinet as a musical means toward

that musical end.  Many of the students came well prepared and demonstrated high potential while studying

Alumni from all over the country came for a first time concert including a chorus, College Symphony

and the Alumni Wind Ensemble performing Holst’s 1st Suite and Sousa’s Stars and Stripes.  All the graduates

were music majors and active in both teaching school programs and performing.  Ensemble quality was fully

professional.  This will surely be an annual Homecoming event;  logistics and performance is credited to the

Fredonia Music Faculty, including Dr Paula Holcomb, Director of Bands at the School of Music.

professionally bound advanced students from all over the city, and an evening recital featuring each of them – Mark Nuccio,

and director of his ensemble ‘Klezmer Madness’, and Charles Neidich, International soloist, member of the New York

careers as soloists and Orchestral players.  Literature covered in the sessions were critically covered whether

of Galanta, Beethoven 8th Symphony, Berlioz Symphonie Fantastique with an Eb student, and the Rachmaninov

2nd Symphony solo.  Each student had different issues, from breaking down the solo part as in the Berlioz, then

adding the grace notes to solidify the playing.  Musical input was emphasized. The Galanta Dances were covered

parts, especially for auditions were pointed out.  Issues of the hall acoustics in approaching how to play were

mentioned.  A student from Krakau Poland played the Rachmaninov with playing reflective of the style in Europe,

which may not work in the US given the differences of orchestral playing approaches.  Flexiblity in playing to match

conditions inside a section were worked, especially dealing with vibrato and how to apply.  Some schools of playing

promote it, others do not,- adjustment is important.  The Beethoven 8th was performed almost flawlessly by another

G, a very dangerous note.  All the students had excellent preparation for this class.

David Krakauer covered tone, opening up on the horn and being able to communicate with an audience.

Brahms 1st Sonata was covered in detail with pianist, especially pitch which needed attention in the throat register.

Phrasing and identifying bad notes, called Bernies, based on a movie about college kids who got caught up with a

murdered person and trying to hide it. Analogy was off cuff, but it did point out importance of clean passage playing

and avoiding those bad sounding notes throughout the horn.  On an Elliot Carter solo piece, imagination and its

perceptions were explored and tried to increase communication between the performer and the audience.

Charles Neidich intensively coached a student with the Stravinsky 3 Pieces, and gave an extensive

historical analysis of the piece, especially since it was republished with glaring mistakes that had to be identified

and almost re-written. Questions arose about original manuscripts, the publisher, unaccounted for mistakes and

just what is the right correction.  A work for 2 Bassoons in manuscript had motifs of the clarinet pieces which seemed

to solve the discrepancies. Question was brought about whether the key of the clarinet was correct- 1st and 2nd

movement for A Clarinet, and the 3rd movement for Bb.   The student, from Montreal played a very dynamic

performance and was critically coached about all 3 pieces.

Fred Weiner, a major instrument seller came with a display of Clarinets, accessories such as reeds, tools,

mouthpieces, etc, along with others such as the Wind Instrument Center and Dan Johnston, a major Clarinet

Mouthpiece maker and craftsman.  Ample time was provided for the many participating to visit and deal.

Of interest, a work composed by Mr  Neidich in memory of the victims of the Tseunomi disaster was

This entire day was meaningful and exciting the entire time held.  Events like this, no matter where held,

is of extreme importance for the growth of all players. Diversity of approach by all 3 teachers made an impression

that there is more than one way to attack the problems and concepts at hand.  Hopefully this is an annual event.

working with all involved.  One major objective is to showcase the Mannes College and the quality education

assets present here in connection with itself as a Music College and associated with the New School, a major

Buddy DeFranco, Jazz great, is named by the National Endowment for the Arts

"When I think of all the excellent musicians there are in this world, to be chosen as a recipient of this great award is indeed an honor." – Buddy DeFranco

A brilliant improviser and prodigious technician who has bridged the swing and bebop eras, Buddy DeFranco was born in Camden, New Jersey, in 1923, was raised in South Philadelphia, and began playing the clarinet at age nine. At 14, he won a national Tommy Dorsey Swing Contest and appeared on the Saturday Night Swing Club with Gene Krupa. Johnny "Scat" Davis soon tapped him for his big band, inaugurating DeFranco's road career in 1939. DeFranco subsequently played in the bands of Gene Krupa (1941) and Charlie Barnet (1942-43) and in 1944 became a featured soloist with Tommy Dorsey. Meanwhile, the modern jazz revolution was in progress, led by Charlie Parker and Dizzy Gillespie (JM). Excited by the improvisatory freedom of their music, DeFranco became the first jazz clarinetist to make his mark in the new idiom of bebop.

In 1950, DeFranco joined the famous Count Basie (JM) Septet. He toured Europe with Billie Holiday in 1954, led a quartet for three years with Art Blakey (JM), Kenny Drew and Eugene Wright, and then joined with Tommy Gumina in a quartet that explored polytonal music, further solidifying his reputation as a "musician's musician." In 1958, he premiered Nelson Riddle's Cross Country Suite at the Hollywood Bowl and later recorded the composition for Dot Records. His other notable concert and recording appearances have included dates with Art Tatum, Nat King Cole, Charlie Parker, Dizzy Gillespie, Stan Getz, Lenny Tristano, Billy Eckstine, Barney Kessel, Herb Ellis, Ray Brown (JM), Mel Torme, Louie Bellson (JM), Oscar Peterson, and the John Pizzarelli Trio, as well as several Metronome All Star sessions. He was a featured artist in numerous Jazz at the Philharmonic tours of Europe, Australia, and East Asia. In 1966, he became the leader of the Glenn Miller Orchestra, a post he maintained until 1974.

Since the mid-1970s, DeFranco has combined a busy teaching career with extensive touring and recording. His numerous television performances have included appearances on The Tonight Show with both Steve Allen and Johnny Carson. He was a featured soloist on Stars of Jazz; had his own program on public television, The DeFranco Jazz Forum; and with his long-time musical colleague, vibraphonist Terry Gibbs, shared the spotlight on a segment of the PBS series Club Date. DeFranco has played at concerts and festivals throughout the United States, Europe, Australia, New Zealand, South Africa, Brazil, and Argentina. To date, he has recorded more than 160 albums, has won the Downbeat All Stars award 20 times, and the Metronome poll 12 times. The University of Montana, Missoula, now hosts The Buddy DeFranco Jazz Festival each April.