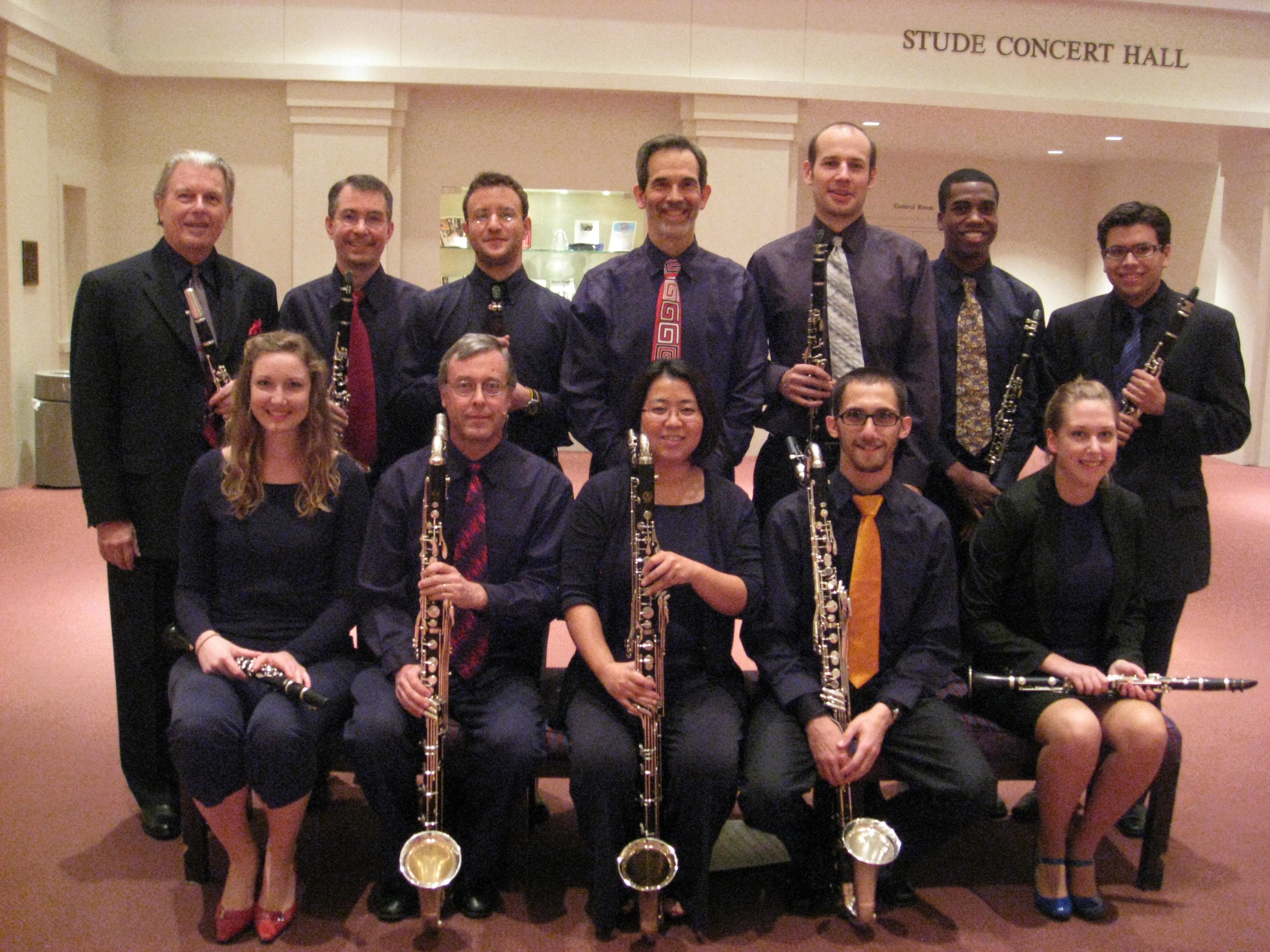 Concert was sponsored by The Foundation for Modern Music and was a tribute to Richard Nunemaker's career as an advocate for new music and his history as a commissioning performer/recording artist.  Performance held at Rice University in Houston, Texas

This concert was sponsored by The Foundation for Modern Music and was a tribute to Richard Nunemaker's career as an advocate for new music and his history as a commissioning performer/recording artist. Three of the works on the concert were commissioned by or for Nunemaker.
Attached is the program.

Highlights are of course NYCounterpoint. Very enthusiastic group and a fine performance. The Rockmaker is the commission that started it all. It was my first big commission. The Gottschalk was a world premiere and a wonderful new addition to the bass clarinet repertoire. It is an all out barn burner work. Lots of notes and lots of "Dolphy" energy. The Lavenda Quintet is a large scale work, very demanding for all. A major work deserving of many more performances. All in all it was a very successful concert. We followed it with a master class at Rice University on October 31st.

The 5th International Clarinet Competition, to held in Noci (Bari-Italy) from 15 to 21 October 2009, was won from the twenty years Italian clarinettist Giovanni Punzi.

He won € 1.200,00 and a professional SELMER clarinet “Odyssee” to offered from the homonymous firma of Paris.

1.       the winner of the competition Giovanni Punzi (Italy)

A Clarinet multi ensembles concert as part of the American Chamber Ensemble series held during the year, featured an array of works including arrangements for Quintets, and a Clarinet Choir performance of professionals and students, and as a feature appearance of Stanley Drucker, retired emeritus Solo Clarinetist in the New York Philharmonic, supporting the concert with Director and wife Naomi Drucker.  Of interest is the fact that reaching out to the local populace with performances and upgrading the cultural levels there, and involving thus inspiring students in their playing together here has its rewards, especially when a legend as Drucker is performing with them. The Druckers as a team have performed constantly in these venues for over 30 years to great acclaim in addition to the Chamber ensemble series performances.  The above programs and galleries tell a great outreach story and dedication to music making.

The 3rd Boston Clarinet Day was held and probably the most successful day to date, with a star array of artists as listed on the Clarinet Day website, as Shirley Brill, from Israel and winner of the Geneva Clarinet Competition, Robert Spring, Professor at Arizona State University and virtuoso in New Music techniques, Wesley Ferriera, Professor at Mount Allison University in Canada, Jonathan Aner, major virtuoso and acclaimed chamber music performer, and Yoko Hagino,  with a special appearance and tribute to Norsworthy's former teacher and important mentor Elsa Ludewig-Verdehr, who performed and with the other faculty gave a master class.  As with past clarinet days, exhibits from all the major firms dealing with instruments, accessories and printed music were present for all to engage.  Special emphasis was applied in new music and techniques and Solo and Orchestral literature.  As this is a striving annual event, it can't be emphasized enough for all serious players and students to attend.  Credit is greatly due to Professor Norsworthy for making this event one of the most important in the country, no less the Northeast United States.

The 2nd annual Air Force Band of Liberty Clarinet Day was held on October 17, 2009 at Hanscom AFB, MA, where the guest artist was Dr. Robert Spring, professor of clarinet at Arizona State University. The all-day workshops and master classes were held in the main rehearsal hall of the SSgt. Joseph A. Breneman Building.  Attendees ranged in age from fourth grade beginning players to university students and adult players.  Clarinet Day was developed to bring Boston area clarinetists together and strengthen relations between military musicians and civilians.

The day’s events began with a warm welcome by the Air Force Band of Liberty’s commander and conductor, Captain David Alpar.  Next, participants were treated to an absolutely incredible performance by clinician, Dr. Robert Spring.  The program included: Solar Flair for two clarinets by Theresa Martin (performed by Dr. Robert Spring and Michele Von Haugg), SubtrainS “O” StrataS fearS by Eric Mandat, Flight of the Bumblebee by Nicolai Rimsky-Korsakov, Czardas by Vittorio Monti, Carnival of Venice by Girolamo Salieri, and Round of the Goblins by Antonio Bazzini.   Dr. Spring’s wonderful musicianship, impeccable technique, and incredible execution of rapid tonguing and circular breathing wowed the audience.

Following lunch, Dr. Spring gave a workshop on Extreme Clarinet techniques.  He began by demonstrating basic techniques that lay the foundation for all other extreme techniques—solid embouchure, good tone, rhythm, tonguing.  Then, Dr. Spring further discussed the topics of circular breathing and double tonguing.  He believes that anyone can do it.  All of the participants learned a great deal from Dr. Spring.

Clarinet Day concluded with a performance by the Air Force Band of Liberty’s Bay State Winds Clarinet Quartet.  The members are MSgt Jennifer Dashnaw, Sgt Richard Lacroix, SSgt Mickey Ireland, and SrA Ian Tyson.  The quartet performed The Barber of Seville by Gioachino Rossini, Cinq Mouvements by Claude Arrieu, Four for Four by Jorge Montilla, and Die Kunst der Klarinette (Variations on “Colonel Bogey”) by Ian Holloway. This crowd pleasing performance was the perfect ending to a wonderful and successful day of clarinet.

Without doubt one of the most supercharged Spectaculars to date, this event was an exciting from start to finish with the active presence of legendary Clarinetist Stanley Drucker of the New York Philharmonic, in the giving of a 2 1/2 Master Class to 14 students covering literature and a long extensive coaching of Orchestral material for those interested in Orchestral playing and auditions.  There seemed to be no second to breathe when under his scope.  The coaching was very friendly but critical and students quickly picked up that.  The audience was very attentive as well following everything covered.   Another session with faculty Caroline Hartig and Justin O'Dell covered Mr Drucker's experiences and history in The Philharmonic from his early time when he just took the position at age 19, and how his evolution began with the great players around him and the conductors who influenced his approach to playing.  His experiences at the Solo performances of the literature including the recordings with Bernstein of the Debussy Rhapsody, the Nielsen Concerto, and the Corigliano (the high point in his solo career) were discussed.  Several questions were asked and the participation was very broad.   Before a Raffle was presented later in the afternoon, Mr Drucker tried several Buffet Clarinets and the best one on display was presented with Mr Drucker's signature embossed on the clarinet case to a student who won it.

Programs of the day are galleried to show the content of presentations.  Exhibits were available as in all the conferences to browse and buy including instruments, accessories, music,  and repair services were available as well.  During the afternoon the room was packed.

Two interesting sessions were presented by Professors Caroline Hartig, her's on Circular Breating and how to master it and apply to one's playing, with a handout on the subject, and Justin O'Dell gave a talk about a new Clarinet Method authored by famed Italian Clarinetist Allesandro Carbonare covering a unique method of improving high range playing with extensive use of interval and scale studies and thematic musical material not written specifically for the clarinet.  Concerns about range would evaporate after mastering the book's contents.

Caroline Hartig and Justin O'Dell shared a morning opening recital, and Mr Drucker performed the evening, preceded by a Recital of selected students.   Programs are galleried above.  This Spectacular is probably the high point day in the 4 years it has been held.  Credit is certainly owing to Dr Hartig, Dr O'Dell, Buffet-Crampon and Francois Kloc, Artist Director, who made it happen for the players and students who attended and benefitted from being part of something historic. Of interest, Dr Hartig has just released a new CD focusing on Solo Clarinet issued on the label Centaur.    Mr Drucker has remarked that one should play with a Joy and Passion as he has done in his years, and it certainly was evident with those attending here, who will carry this legacy hopefully forever in their playing.