perform in professional orchestras. Rocco Parisi has been invited to perform and give master classes at ICA

Soloing on three continents, his gripping sound and virtuosic command of the bass clarinet are truly spectacular to behold. 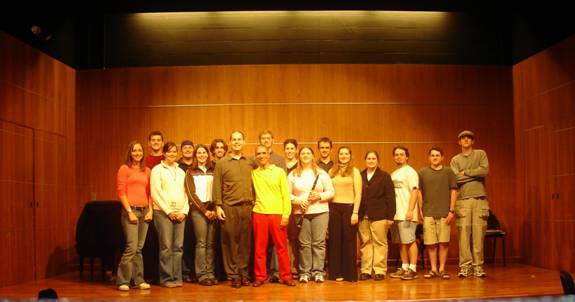 and the West Michigan Concert Winds in Muskegon and Allendale, Michigan. He displayed a beautiful sound

on the basset horn for Mendelssohn “Concert Piece no. 2,” blending with Campbell’s consistently refined

Ponchielli “Il Convegno” with the West Michigan Concert Winds, conducted by Gail Brechting. In a

and uses a Lomax 1873 mouthpiece for both his bass clarinet and b-flat. Parisi uses Vandoren Traditional

strength 4 reeds with a BG ligature. 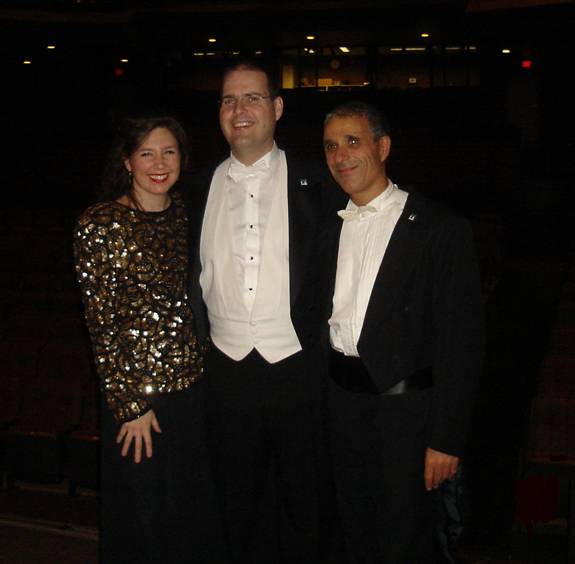 Interestingly enough, his father did not want Rocco to play music as a career, but that did not deter the

He has premiered and recorded several innovative bass clarinet CDs. He worked with Luciano Berio on

Sequenza IXa. He has many accomplishments. Yet, Rocco retains a charming humility that attracts attention

and affection. Rocco has been married to his wife for 18 yrs and they have a son and a daughter. Even during

the hectic schedule of the third week of October, he found time to call home and talk to his family. 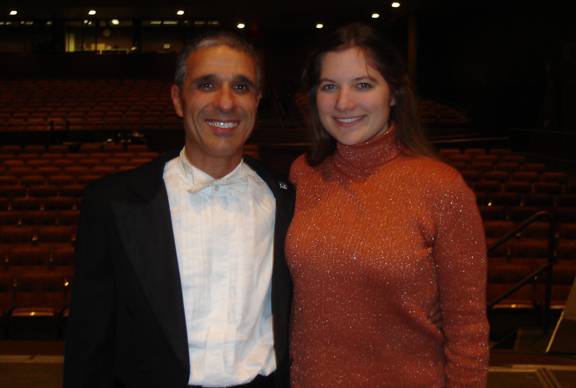 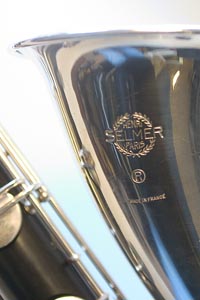 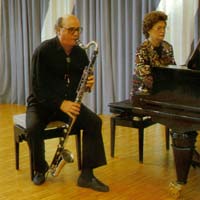 Convention in the 50th anniversary year.

instrument for clarinet players. Horák’s 1955 recital marked the moment when the bass clarinet first became thought of as a

soloist’s instrument. It inspired numerous composers to write solo works for the instrument, many of which were subsequently

included in his recordings. His efforts laid the foundations upon which the classical bass clarinet has developed.

in one of the many concerts given by the leading bass clarinettists of our generation.

Bass clarinet players from all over the world came together to play, listen to lectures and concerts and to join the Mega Bass

Clarinet Choir that finally consisted of 148 players! (This will officially be mentioned in the Guinness Book of Records.)

Representatives from all sorts of different musical styles were present at the convention. To name but a few:  jazz musician

from Spain. The second prize was won by Jiri Porubiak from the Czech Republic and the third prize by Sachiko Ueyama

Out of over sixty (!) entries a jury of David Loeb, Henri Bok and Dutch composer Klaas de Vries selected the composition

Child to the Black-Faced Night by Marc Kenneth Yeats (GB). Yeats’s winning composition was played during the final

concerts in the presence of the composer.

The guest of honor of the convention was the great Josef Horák, the pioneer of the modern bass clarinet who was the first

to see the possibilities of this remarkable instrument back in the 1950s. Half a century after his first bass clarinet recital

Josef Horák played on the stage of the prestigious Rotterdam Concert Hall the Doelen. This was not only a historical

event but also a very emotional moment. The audience paid a deep respect to Josef Horák and his wife and duo partner

The Mega Bass Clarinet Choir was directed by composer Paul Harvey. Especially for this occasion Paul Harvey had

the-state-of-the-art of modern bass clarinet playing and he also played several recitals himself.

bass clarinet will create it’s own paths in music, quite independent of the other members of the clarinet family.

As Bennie Maupin said during the Convention: 'I notice a growing interest in the bass clarinet. The audience is really

starting to listen to the possibilities and the unique voice of this instrument. In my opinion the bass clarinet is the

instrument of the future.'

In the coming months we would like to use this website to publish some follow-up information about the convention.

If you have any photographs of the convention, or audio or video files you would like to share with us or maybe you

want to write a report, please send your contribution to maartenmestrom@worldbassclarinet.nl

We would like to thank all participants, visitors and sponsors of the convention. You made it all happen.

Sponsored by Buffet USA and Newberry College, the college hosted its first clarinet festival ever this

past week.  On the agenda for the 2 day event was a Recital by Buffet Artist and Rochester Philharmonic

clarinetist Robert DiLutis.  The recital, for a sell out crowd, attracted clarinetists from around the state of

by Angel Kotev, the Bulgarian composer, written for Mr. DiLutis this past summer.

Clinics by Mr DiLutis during the week included a reed making seminar, an instrument repair clinic

Carson.  James did a excellent job and we welcome him into our clarinet family.  Special thanks as well to

Dr. Barry McGinnis, clarinet and saxophone professor at Newberry College, for all of his work organizing a

has brought clarinetists from all over the country. He is also the maker of the famed Reed Machine and

Mr. DiLutis' next clinic will be at Clarence High School in Clarence, New York  on November 4th 2005.

Vandoren has started a revival of interest in this medium in this part of the USA, with a dedicated program to further

the ensemble format.  Many Clarinet Choirs function worldwide, and it is hoped that they will all be brought

together with this proactive undertaking.  Mitchell Estrin, WKA Performing Organization Chair, Professor of

Clarinet at University of Florida, and Educational and Creative Manager for Buffet-Crampon, and a performing

member at the New York Philharmonic for tours and larger orchestral requirements, is the spearheader of this

leading conductor and transcriber of Orchestral works for Clarinet Choir, led an intensive program with the total

enrollment Mass Choir, which performed literature from his personal ensemble library.  The 2 day program had

several invited Choirs and chamber groups such as Clarinet Quartets and other chamber music.  Many of the groups

were community groups of high quality, and University Choirs. Complete information about this event posted on

different facings to suit the players, and unique about them is the technology accuracy and material consistency never seen

before no less the very clean tone quality and effortless response which made reeds less of a problem.  Price tag is $500

US each.  After trying 4 German formatted mouthpieces, I was convinced that these may be the best mouthpieces on the

market.  Over 60% of the invited visitors to the reception bought at least one.

During the whole 5 hour afternoon reception/ tryouts, it was very clear what makes Morrie Backun a special individual

in this field.  As a Bass Clarinetist himself with years of Orchestral experience, he was astute about all critical aspects of

playing and able to instantly hear problems and make solutions.  During sessions held on this tour, critical evaluation of

instrument care and maintenance was emphasized.  During a session he asked everyone to pull out their clarinet swabs,

and discover that many had swabs that have not been cleaned for years?, all of which contributes to subtle damage to the

bore of their clarinets. When one plays, acid from the mouth travels down into the horn along with the condensation.

Another serious topic included the importance of key maintenance, pointing out that if the keys are noisy due to no cork to

quiet the action, and the seal is not tight, these are noticed in critical performance situations, and if an orchestral audition

panel  heard all this, one’s chance to make good on it is as good as cancelled in less than a minute, citing that if the applicant

plays like this and doesn’t take care of his equipment, why should we have him?  Many other areas were covered, and the

participation was very high in numbers who came, and the seriousness of why they came.   Mr Backun worked with everyone

who desired assistance, and brought equipment and tools to help everyone.    This 5 hour afternoon was held in the Trump

Metropolitan Opera Orchestra, Lincoln Center, many major schools, and freelance musicians from all the venues.

from many others, including Jessica Phillips, Eb Clarinetist in the Met.  Later in the day, Master Classes were held at

of what was convened earlier in the day.

This combination of Artist/ Technology was an important event and hopefully will open minds about what they play.

Many instruments by nature of their production, need enhancement to bring out their full potential, and in other cases,

to salvage them.  It may not be obvious to most, but the quality of equipment a Clarinetist plays is a major priority and

the cost, whether one buys a hand-made or a production model must fulfill a standard, and such enhancements as seen

here can make a large difference for everyone.

the Festival started with a performance with Dr Hartig and Daniels. Both have collaborated as duo performers and

they performed for 2 Clarinets and Piano Mendellsohn Concertpiece #2, Crusell Rondo for the same, and Ponchielli Il

Covegno for the same combination.  Performance was quite effective  given the fact that Eddie Daniels is principally

jazz but adept at standard classical repertoire as proven here.  Eddie Daniels is classically trained at Juilliard.  The

Informality at the concert made the evening fun for all as the ice was broken.

students over major basics of playing the horn, including embouchure, tonal voicing, breath support, and being able to

accomplish this naturally.  Demonstations were made throughout with comments for improvements in their playing.

Repertoire was used including the Stravinsky 3 Pieces, and other works chosen by the students.  The same kind of

class with 6 students were done by Eddie Daniels, covering classic music, the difference being the artistic flexibility

Daniels can offer to open up a student.  One aspect in having Eddie Daniels here is the importance of being free on

the horn to be able to play classic and jazz and not be stuck in a box over it.  An interesting point was made when a

student played the Hindemith Sonata in classic straight lace, and then Daniels plays a similar phrase from Hindemith

and exposes the theme of Star Trek. Impression to student clearly made playing the piece easier to grasp and enjoy

playing it.  A jazz concert with a combo – Piano, Bass, Drums, and Piano effectively finished the evening concert.

Unknown to some, Daniels is adept at Tenor Sax in which he played as a priority instrument until the Clarinet grabbed

him.  Performance and extemporanium grabbed everyone this night.

Ensemble Quatredacatet performed a work by composer and past faculty member James Niblock.       A Clarinet

Quartet, the By B-Flats, played a short program.    Performances were solid and diverse.

studio, and what was needed to fulfill that goal, including relationship with schools to get students, teach them possibly

at the school, teaching fees, instrument purchasing or renting, and parental issues in regard to young student beginners.

Class was given by teachers Cathy Wood, Jackie Boyd, and Rachel Yoder.  A young student who played only 18 months

performed a short piece to prove that results can be made with effective teaching.

Information about this work and other premieres on the Clarinet Premiere Page.

on the Premiere Page, with a spellbounding recital showing the virtuosity and flexibility of this trio.  The group played

with style and played unusual works not normally heard on regular programs.  The first half included Stephen Chatman’s

Tsuji-Nakanichi, Peter Dickinson, and Alexander Arutiunian.  The Verdehr Trio is touring worldwide with many premieres

including Athens, Greece, Moscow, London, and Vienna.  This ensemble, with the many recordings, composer commissions,

and subsequent reputation, is a hallmark of this University School of Music.    The event this weekend is the product of one

of the high tier music clarinet schools in the USA.  Credit is due to Dr Hartig, Dr Verdehr, and the Clarinet Alumni  who

have made a mark from the great teaching practiced here.