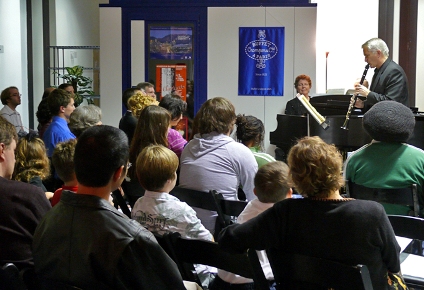 Buffet Crampon USA is proud to have hosted the first of many planned Artist chamber recitals at our Jacksonville, Florida Headquarters. Jacksonville Symphony Orchestra Principal Clarinet Peter Wright performed a solo clarinet recital of French and American classics Tuesday, November 20 at Buffet Crampon USA. Accompanied by pianist Rachel Clifton, the recital was attended by over 60 and was followed by a gourmet reception of French food catered by J.J.'s Liberty Bistro of Ponte Vedra, Florida. Photos of Peter's recital may now be found on our MySpace page in the "Peter Wright Chamber Recital" album of our "My Pics" section.

With the success of Peter's recital, Buffet Crampon USA will continue to showcase our Performing Artists with more of these concerts in Jacksonville. Keep an eye on our website and our MySpace page (www.myspace.com/buffetcramponusa) for more information on future concerts at Buffet Crampon USA! 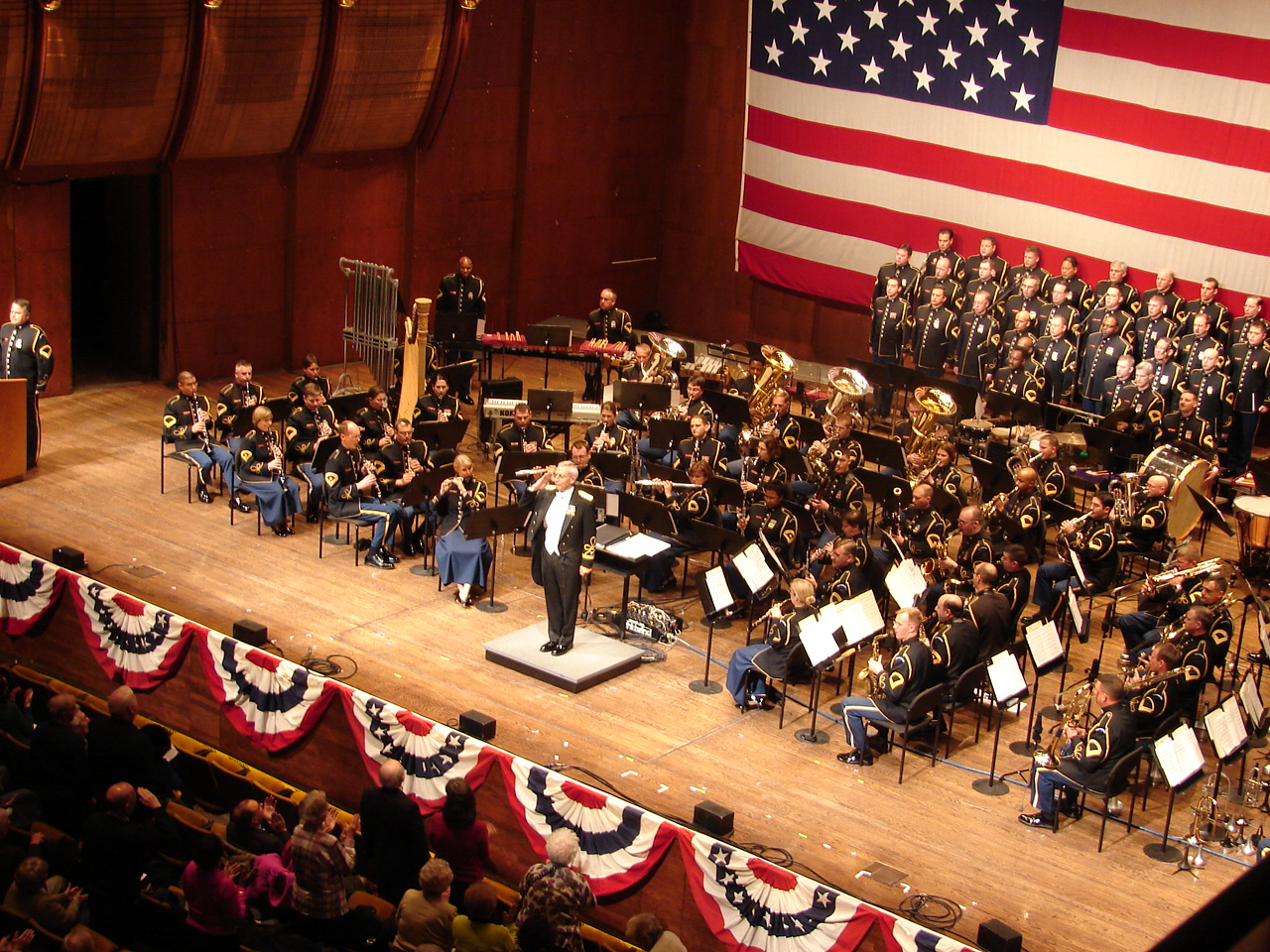 A world-class Patriotic concert took place at this world-class Concert Hall, conducted by Commander and Conductor Colonel Thomas Rotondi, Jr with the theme 'That's America to Me' featuring American music from various times in American History as the program states. Morton Gould's Symphony for Band (Marches) - the West Point Symphony was a high point on this concert as it was written for the United States Military Academy Band in 1952. Another majpr American composer Don Gillis' Symphony $0, 2nd movement dedicated to the memory of John F Kennedy, was also performed.  Many other works featuring jazz of several greats was performed with 6 Jazz soloists, and other works of Leonard Bernstein, George Gershwin, and others filled the program.   Other elements of this Band including the US Army Chorus, the Strolling Strings, and several vocal soloists. Veterans attending were honored in grand style for their service.

A major high point of this concert was the winner of the Concerto Competition, open to High School students from the New York City area.  The winner was a Juilliard pre-college student of age 16  Weixiong Wang, performing the 1st movement of the Weber 2nd Clarinet Concerto with the technical authority of a seasoned professional soloist.  There was total control of the work, with creative energy that energized the audience.  The Band gave solid support and flexibility for the soloist. Mr Wang is a student of Alan Kay  at Juilliard.  The prize for the winner is this performance with the Band in this hall and a generous US Savings Bond.  This distinction has far reaching implications being a Lincoln Center debut and a major career stepping stone for future study and scholarship.

More information about this program contained in the galleries and the Army Band website linked above.  This Competition is a positive outreach to the Music community and a way to foster appreciation for the mission of the Band.

The event took place in the beautiful venues of the Nordic Music School and was held during 2 very intense days.

This year the main focus was on young clarinettists and also bringing together professionals playing with this group of players.

The symposium was well attended and it had topics such as airflow, playing techniques, reeds and how to adjust..

One concert had all the participating faculty and participants playing together.

Exhibitions from Rico and Jonas Näslund music,   Vandoren, Howarth and Buffet . The clarinet summit will come back next year.

The fourth Annual Clarinet Spectacular Conference was held in honoring homage to long standing Distinguished Professor of Clarinet Dr Elsa Ludewig-Verdehr, one of the landmark Clarinet performers and pedagogues in the United States.  The track record of successful students passing through the doors of this University is awe-striking with over 70 Professors worldwide and more performers who have made major careers.   She and her husband Walter Verdehr (Violinist) organized the Verdehr Trio (Violin, Clarinet, and Piano) and have been responsible for commissioning over 200 chamber works for this ensemble venue opening a vast new repertoire of New Music that they perform on worldwide tours.  There are few if any who have achieved this feat and hold a major teaching position.

Recitals by former students and Dr Hartig and Ted Oien

Dr Verdehr gave an interesting talk with the participants reviewing her extensive career including her time as a graduate student at Eastman School of Music with many of the legend players of our time during the 1960's including her time in the Eastman Wind Ensemble under Frederick Fennell playing in a Clarinet section with luminaries as Larry Combs and Peter Hadcock, who traded Orchestral excerpts across the section flawlessly and alerting the importance of this knowledge. These formative years were very important, when many of the great teachers of that time included names like Robert Marcellus of the Cleveland Orchestra,  Keith Wilson of Yale University William Stubbins at the University of Michigan, Keith Stein, from Michigan State University,  Himie Voxman of the University of Iowa, Mitchell Lurie at UCLA and University of Southern California, and her inspiration of that time Ignatius Gennusa, Solo Clarinet of the Baltimore Symphony.  Verdehr recalls the Mozart Concerto with him as a moving experience that guided her concepts in performance.  Much credit was give to Stanley Hasty, her prime teacher at Eastman, who was the great mentor who taught not only the clarinet, musical ideas, but how to teach yourself with the tools provided by his teaching.  Her initial appointment to Michigan State was as a one year job during Keith Stein's absence, but when Dr Stein had physical problems, Elsa was retained and has been on faculty for over 35 years.  Her accomplishment as a woman holding a position with this success has almost changed the career stage for women in the academic and performance world.  During this time, with her husband Walter, organized and evolved to International success the Verdehr Trio with over 200 commissions of new music and its far reaching effects in the Clarinet Chamber music repertoire.  This session was an emotional review of a stellar career of one of the most important figures in the Clarinet Community.

The number of past and present students and colleagues coming to this Day were in the hundreds and coming from all over the USA. Many, as the programs indicate, performed works of all styles and many played works as a tribute to Dr Verdehr.  The above galleries show the programs and backgrounds of many of these past graduates.   Master Classes were given by Dr Caroline Hartig, Professor of Clarinet and Director of this event.   Several students, many High School seniors, were coached effectively covering fundamentals and musical areas.  She is an acclaimed soloist in her own right and a fitting addition to this elite School of Music.  Two important sessions were held covering important pointers for those applying for College music programs, and those pursuing a college teaching career, which is very competitive and needs attention to detail in applying for positions that fit your criteria for what to teach, including more courses than just the instrument. Learning the lessons of disappointment in not winning a position can be a lesson to carry to finally achieve an offer.  All applyings can be a learning experience to improve one aiming for a job.  Another session, led by Detroit Symphony's Solo Clarinetist Ted Oien and Maureen Pauley, covered the importance of full preparation and determination to get that job, covering what the committees want in a player, the most important of which is accurate performance, especially rhythmic accuracy.  Knowledge of the music, not just knowing Orchestral excerpts, is a major key element, as most committees consist of players throughout their orchrestra, not just clarinetists.  The number of applicants trying to get a position has become untenable, and 'behind the screens' auditions make the selection politik-proof.   Persistence and good preparation is absolute.

Exhibits were offered for inspection and purchase of instruments, mouthpieces, accessories, reeds, and music for those attending.  Major firms and sponsors included Buffet-Crampon, Conn-Selmer, LeBlanc, Marshall Music, and others.   Several students and pros came to test clarinets and other goods and services.

A number of student Clarinet ensembles performed along with a Clarinet Choir performing an arrangement of Krommer's Double Clarinet Concerto arranged by Guido Six and soloists  Maxine Ramey and Keith Lemmons conducted by Maureen Pauley. A high point of this day was the performance in honor of Dr Verdehr of a work written by Joan Tower named 'Fanfare for an Uncommon Women' for Dr Verdehr's accomplishments.  The final Concert featured Dr Hartig, Ted Oien,   Brazilian Clarinetist Ricardo Jose Duorado Ferier, with guitar, and Christopher Kirkpatrick performing a new work.

A major presentation was made honoring Dr Verdehr, and in addition, 3 Scholarships were presented to Michigan students:

Robert Petrella, a MSU graduate who gave 2 Scholarships to Karyn Bailey and Laura McLaughlin, and

Every year the Clarinet Day is always a drawing card for players and students to participate, as this School is one of the strongest Clarinet Departments in the country. Unique is its support of teaching contemporary music, and of interest, many of the works written for the Verdehr Trio have become staples in the contemporary music repertoire, another gift of the Verdehr legacy.  Professor Hartig is to be credited with this success and another first tier accomplishment festival.  Of interest, on 30 November- 1 December, the Clarinet / Saxophone Summit will be held, with Charles Neidich appearing which will be a landmark event.  This Clarinet Spectacular was Internet streamed recorded for future access within the next weeks covered by Band Director. com .