For Clarinetists, an inspiring weekend including a major performance by the Chicago Clarinet Ensemble conducted by Chicago Symphony Solo Clarinetist John Bruce Yeh presented a program of transcription works including the Percy Grainger ‘Molly on the Shore’, Mendellsohn’s Concertpieces 1 and 2 with Stanley and Naomi Drucker,  Jeffrey Kowalkowski’s  ruth, rubric-rational, realisms-relationals for Clarinet Choir, conducted by Eric Roth,  and the Gustav Holst Jupiter from the Planets.  Of special interest were 3 Premieres for varying sized ensembles including Eric Mandat’s Pursuits of Paradise and  Zadzinsky’s Hasty Fragments for 8 Solo Clarinetists with Narrator who recited poems before each Fragment.  Performance was exemplary with the soloists and each had their special quality to bring to the piece performed.  Programs galleried above point out all the details.

On Saturday, Stanley Drucker gave an extended Master Class for several advanced students covering Clarinet Solo literature and major Orchestral  excerpts under a critical scoping of their playing.  As with many of these Classes held at many other schools and festivals, the intent is to make a influence for the students to see themselves in what they are doing and improve their musical and style perceptions and technical skills, and coaching like this under a critical scope is what students need to advance.  The value for all to see this in action is critical.  With a legend such as Dr Drucker, the affect should speak for itself.

This Chicago Ensemble has had a successful series of concerts, Clarinet Collaboration Workshops, and has within itself fine players spanning several Universities in the Chicago area and has hosted several major Clarinet icons.  The combination of Artistic Director Rose Sparrazzo and Conductor John Bruce Yeh is a powerful force advancing this medium.  Of interest, Dr Sperrazzo was presented for her dedication and accomplishment with this ensemble by Stanley Drucker  WKA Artist VIP stature with the Official Polo Shirt worn by several others.  John Bruce Yeh has been VIP for several years.  Everyone should keep close contact with this Ensemble as many events are continuously planned.

The seventh edition of the Breno “International Clarinet Competition” “G. Mensi” has taken place on May 12, 13, 14 2011 Breno is a nice little town in the north part of Italy where Giacomo Mensi was born. Giacomo Mensi was a talented clarinetist who studied  at the local Conservatory, in Darfo Boario Terme , and then took a diploma at the Hochschule of Freiburg (Germany) studying with the well known player Dieter Kloecker. Soon after his graduation he died in a tragic car accident. This competition has been organized in order to keep alive the memory of this young player. In the competition the clarinetists could compete in three  different categories : Young Promises A, up to 13th years Young Promises B and from 14th till 17th years .The third category  Excellence , with no age limit,  had participants  with no age limit. President of the jury was Wenzel Fuch. The other members of the jury were Luigi Magistrelli, Nicola Miorada, Primo Borali and Silvio Maggioni, who was also the organizer and Artistic Director of the Competition. A good number of participants arrived from Italy and other European countries: Austria, Croatia, Slovenia, Czech Republic, Switzerland. In the principal category the participants had to play for the first round the E. Cavallini Concerto n 2 (recently published by Eufonia) and the Stravinsky Three Pieces. In the second round the compulsory pieces were Mozart Clarinet Concerto and G. Rossini Variations in C Major. In the third round they had to play again the Cavallini Concerto no. 2. The winner, Ivav Lervent performed on the 15th of may this Concerto (premiere performance in modern times) with Valle Camonica Orchestra , conducted by Silvio Maggioni. 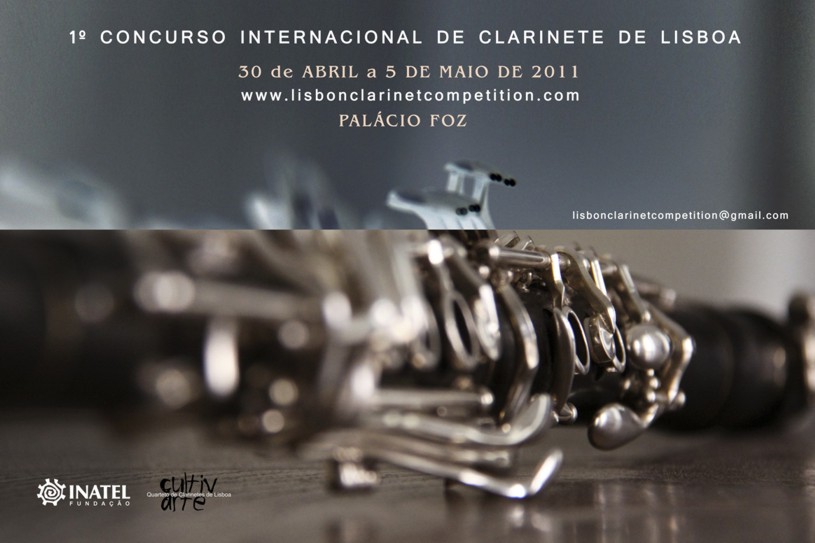 The 1st Lisbon Competition just held between 30 April - 5 May has concluded with the following information as seen below:

Further details about this competition is posted on their above website.