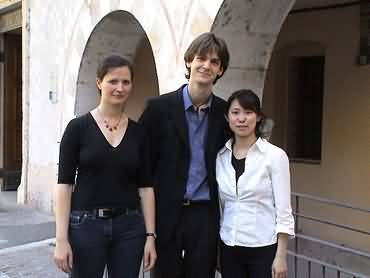 Finalists for the clarinet award

This 2nd Wind Competition sponsored in collaboration with the Associazione Mozart Italia attracted a large International competition for all the Orchestral Wind Instruments including flute, oboe, clarinet, Horn, and bassoon. The respective Mozart Concerto was the principal audition work, judged by 9 jurors from all over the world.  The Clarinet juror was Roland Simonini from France.  The 3 winners in top order was Regine Muller from Germany, Urial Vanchestein from Canada, and Mari Sakurai from Japan.  There were 9 2nd round winners who waged a high level of competition surely making final decisions very difficult.  This appears to be a recently started event being now in its 2nd year.  More information about this competition will be listed on the Competition Page.

This conference is the 29th year of presentation which has earned this project International renown for the consistent quality of programming and activities. This year, several high star performers and University Professors performed and gave master classes and seminars, along with a large industry exhibit representation, 3 of which offered introduction of new instruments for the first time anywhere.  High profile soloists from major US Orchestras included Tom Martin, solo clarinetist of the Boston Pops, Edward Palanker, Bass Clarinetist in the Baltimore Symphony and Professor at Peabody Institute, Joaquin Valdepenas from the Toronto Symphony and Director of the Amici Chamber Ensemble, Kelly Burke, Solo Clarinetist in the Greensboro, NC Symphony, Larry Guy,  J Lawrie Bloom, Bass Clarinetist in the Chicago Symphony, and Gres Rade, Solo Clarinetist in the Dallas Symphony.  University faculty from noted schools included Michael Galvin, Professor at Ithaca College, Caroline Hartig, newly named faculty at Michigan State University, and many more to be named.  Clarinet solo artists also included Dimitri Ashkenazy, Elizabeth Rhuede, Marcia Deihl from the US Naval Academy Band at Annapolis, Maryland, Michael Lowenstern, Bass Clarinetist and artist in Contemporary Music well represented in performance and master class here, Scott Locke, and Doug Storey.  The final concert was a Jazz performance by the noted Ken Peplowski.  There are many other artists who performed and difficult to name them all.  A departure this year was the presence of 3 major Bass Clarinetists who gave classes and diverse quality performances with the latest of new music including multiphonic works. Other groups performing included the Tulsa Clarinet Quartet, a String Quartet performing the Brahms Clarinet Quintet with Joaquin Valdepenas and the Mozart Clarinet Quintet with Tom Martin.  The East Kentucky Clarinet Choir, conducted by Dr Connie Rhoades, performed and also the Symposium participant Choir, conducted by James Meiller, allowing the opportunity for all interested to perform, which occurs each year.  The annual Clarinet Competition was held with the winner receiving a new donated Buffet Clarinet, and the 2nd and 3rd place winners receiving the acclaimed Reed Wizard and PerfectaReed devices from noted Clarinetist and inventor Ben Armato.  Dr David Etheridge, originator and Director of this conference is held with high credit for the consistency of program accomplishment.  Next year will mark the 30th anniversary of this great symposium and is planned for 16-18 June 2005.

During this artistically charged weekend with a Chamber Concert presenting a recent record CD issue with Karl Leister, renowned past solo Clarinetist in the Berlin Philharmonic,  Luigi Magistrelli, artist Professor at the G. Verdi Conservatory in Milan, and his sister Laura Magistrelli, in performance of Italian music and Mozart given at the Fnac CD Shop in Milan.   The recent recording included works by Leister and Italian Friends, and the performance was earmarked to promote this recording by Camerata Records.

Master Classes convened where over 12 advanced students from all over Europe performed the important Clarinet literature including Concerto, Chamber music, and Orchestral audition material.  Like many similar events held wordlwide, this is of total priority importance to all serious players, to work with a legend clarinetist such as Meastro Leister.  Of future interest, Mr Leister is engaging a 6 campus Master Class Tour in the USA in March 2005.