The 3rd World Class Clarinetopia Residence Seminar at this great University convened for 5 days with intensive master classes and activities involving 16 auditioned students from all over the country and covering all aspects of performance critical agendas to make them prepared for the performance profession.  Faculty were the best imaginable with Michael Webster from Rice University, Leone Buyse, and Alan R Kay, faculty at Stony Brook and Juilliard, both Directors of this program, and Caroline Hartig from Michigan State University, and Charles Neidich, faculty at Juilliard and probably one of the top 3 Soloists in the world today.   Critical attention was paid to each student in a series of open classes where they were subjected to detailed analysis of their issues and solutions from each of the mentors with new approaches that had a stream of similarity that made their playing more advanced.  There were 2 Student Recitals where the master class coverage of their solo repertoire was a step to their recital performance, and the results were evident in their technical and refined playing.  Almost sounded miraculous given the short week of preparation.   The above galleries contain the Master Class information and the Recitals.

The scheduling every day consisted of sessions starting after a small breakfast, with Yoga training given by Director Michael Webster, an expert in this art, introductions to encourage all to embrace the practice as it provides a disciplined exercise in learning relaxation and good posturing of the body which can help one's health and better stress control and impact one's playing.  Almost every day the session opened the training, followed by Clarinet warmups presided by Alan Kay and in later days Caroline Hartig, covering tone exercises, tonguing exercises, fulcrum studies, and more. This effectively prepared the students for the master classes and recital rehearsals in prep for their performances.  These sessions were held at the Wang Arts Center, next door to the Staller Performing Arts.

In addition, there were 5 performances, one a Faculty Recital, a Jazz concert with the Anderson Brothers, both Juilliard students and twins who have their own Band, and performing music of that swing era of Goodman and Artie Shaw with a sextet.  Charles Neidich performed a miracle recital in which he flew in from Quebec City to Newark NJ, took a train to Stony Brook, arriving here only 20 minutes before the first beat with no rehearsal preparation whatever, and gave a near perfect performance.   After this program he gave a 3 hour master class until 11 PM.   Caroline Hartig, who came earlier in the week gave several sessions and of interest she studied with Mr Neidich at Stony Brook for her Doctorate and taught many of the same concepts and covered New Music Clarinet techniques which is standard fare in trainings including Overtone partial and knowing where the nodes are in using them to improve range, flexibility, and double stops, and high speed tonguing, and other topics.   Both these artist-teachers are essential prospects to study with as not many others are as complete in covering this important aspect of playing.  This can make or break a student’s potential.

The informality and super friendly atmosphere and positive reinforcement here was evident as everyone was routing for each other during the week.  Orchestral playing was given a high priority as coaching was constant and a behind the screen audition with no nonsense critical formality was done, with the committee consisting of the faculty and non playing participants with a form completed on each unknown applicant playing.  Discussions followed, and the applicants received the results in writing as to the judgements completed.

In its 3rd year, the Clarinetopia has proven itself to be one of the most advanced workshops presented.  Many Festivals have a large multi-instrumental faculty which perform this same kind of program which is very good, but this is the world-class of workshops, along with a few others during the summer such as held at Indiana University and the Buffet Clarinet Academy in July.  Common linkage is the super artist faculty and critical attention paid to support the students and their quest to excel as artist level players. With the past 2 years, luminary world class faculty have included a founding member  Stephen Williamson of the Metropolitan Opera Orchestra, and now upcoming Solo Clarinetist in the Chicago Symphony, Stanley Drucker, legendary Solo Clarinetist in the New York Philharmonic, Laura Flax, Solo Clarinet in the NY City Opera Orchestra, and more future players of note who will further advance this great cause.  Due credit is owing to Directors Michael Webster, Leone Buyse and Alan Kay, and especially to Caroline Hartig and Charles Neidich. 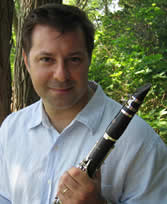 After an extensive and wrenching search over a 2 year period to find a worthy successor to legendary retired Solo Clarinetist Larry Combs, Steve Williamson has been appointed as the designate successor to hold this world class position.  As Williamson's biography shows, he has an extensive Orchestral background especially as Solo Clarinet in the Metropolitan Opera Orchestra in New York.  With Riccardo Muti,one with extensive Opera credentials, it looks like a good mix that can enhance the Orchestra.  Information about Mr Williamson is below.  He is a WKA Officer VIP.

Mr. Williamson has recorded for Sony Classics, Telarc, CRI, BMG, and Decca labels and can be heard on soprano Renee Fleming's most recent CD, "By Request", with the Orchestra of St. Luke's. Mr. Williamson was the Grand Prize Winner of the 1994 Boosey & Hawkes/ Buffet Crampon First Annual North American Clarinet Competition.

As a featured artist for the Schleswig-Holstein Musik Festival and the European Mozart Foundation, he has been on radio and television broadcasts with such artists as Maurice Bourgue, Alexander Longuich, Radovan Vlatkovic, and principal members of the Orchestre Nationale de Paris and de L'Ensemble Intercontemporain.

As a core member of the Met Chamber Ensemble, Mr. Williamson has performed extensively with Maestro James Levine both as soloist and as chamber artist. This season at Carnegie Hall he will perform works of Wuorinen, Carter, Beethoven, Brahms, as well as Alban Berg's "Four Pieces for clarinet and piano, Op. 5″ accompanied by Mr. Levine. He will be on tour with the Metropolitan Opera Orchestra this June (2006) to Japan as well as Guest Principal Clarinet with the Orchestra of St. Luke's for a tour of European festivals in late August (2006). Mr. Williamson is on the clarinet faculty at Columbia University and the Mannes School of Music in New York City. He received his Bachelor's Degree and Performer's Certificate from the Eastman School of Music, as well as a Master's Degree from The Juilliard School. As a Fullbright Scholar, he furthered his studies at the Hochschule der Kunste in Berlin, Germany where he collaborated with various members of the Berlin Philharmonic. His past teachers include Peter Rieckhoff, Charles Neidich, Kenneth Grant, and Michael Webster. Mr. Williamson currently plays Selmer Signature clarinets and uses Vandoren traditional reeds with a James Pyne JX/BC mouthpiece. 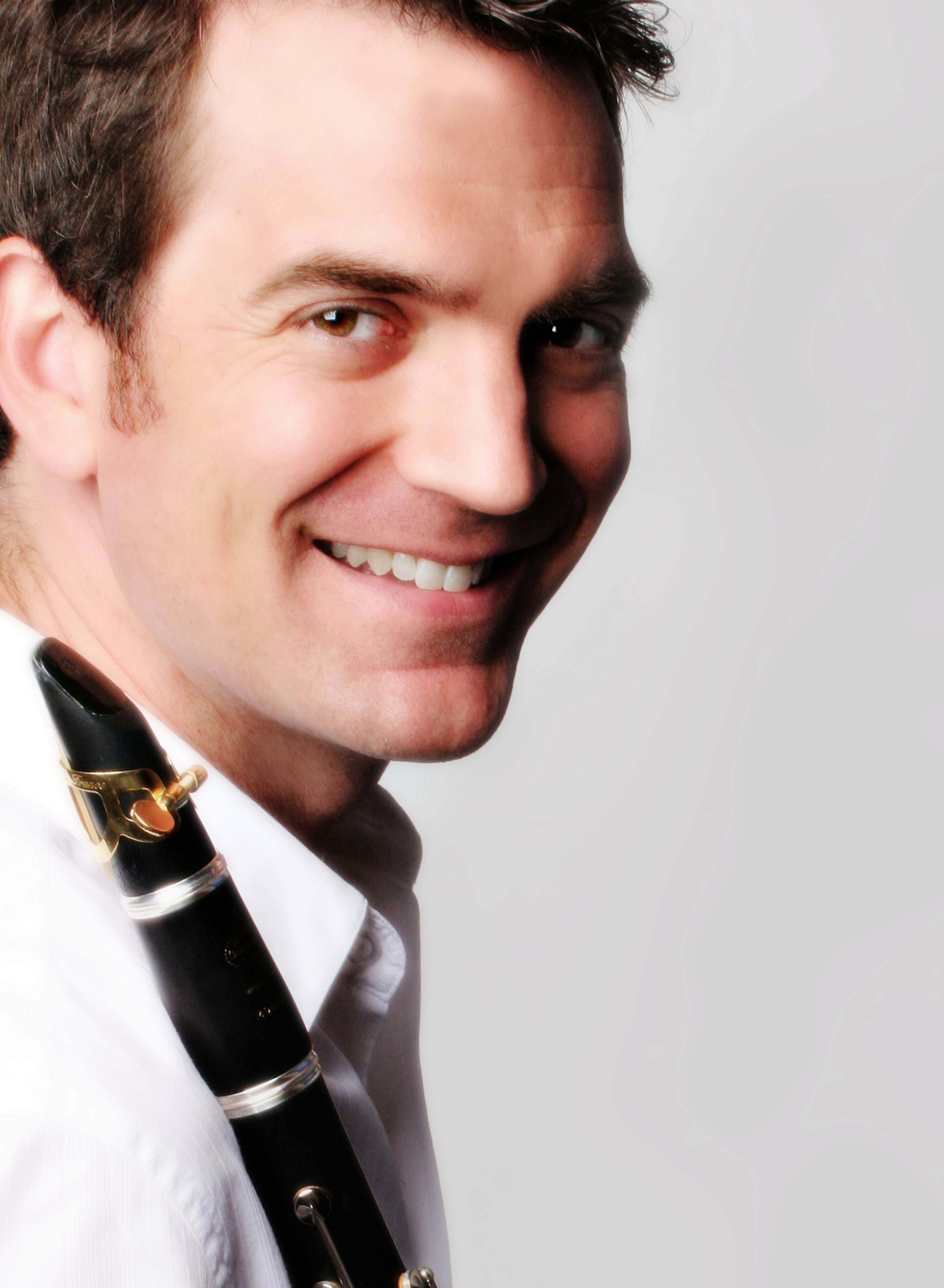 The Des Moines Symphony is proud to announce the appointment of Gregory Oakes, Professor of Clarinet at Iowa State University and an acclaimed soloist, chamber musician, and proponent of New Music as the new Solo Clarinetist.  As his Studio website indicates, his credentials are far reaching in scope and he is a sought after performer all over the USA.

Gregory Oakes is one of the most exciting and energetic clarinetists of his generation. From his Carnegie Hall debut with members of Ensemble Intercontemporain and Pierre Boulez to his performances as a member of the Colorado Symphony Orchestra, Mr. Oakes has been praised by critics for his “outstanding performance” (New York Times) and “jazzy flourishes” (Denver Post). American Record Guide says “Oakes is the rare player who has both excellent classical training and a mastery of the otherworldly procedures demanded by non-traditional repertoire,” and Fanfare Magazine lauds the “formidable technical armamentarium at his command.” He is a founding member of the new music and creative arts ensemble Non Sequitur, which was heralded by New Music Connoisseur as “utterly sensational.” In a performance with Non Sequitur, the Aspen Daily News highlighted him as a “particularly outstanding musician.” Non Sequitur has been in residence at Princeton University, Harvard University, Dartmouth College, and the Aspen Music Festival.

A flexible and versatile musician, Mr. Oakes has performed with notable musicians in prestigious venues around the world. He has been a concerto soloist with the Colorado Symphony Orchestra and the Denver Brass, performed with Grammy® Award-winner Terence Blanchard at the Telluride Jazz Festival, and appeared at the Chicago Arts Club. His recordings have been released on Bridge, CRI, Gothic, Karnatic Lab Records, and Naxos and broadcast on National Public Radio. His recent solo CD, New Dialects, appears on the Centaur Records label.

Gregory Oakes is a Buffet Crampon USA and a Vandoren Performing Artist.

To Blow is to Play - Recital with World Premieres - University of St Thomas,  - Richard Nunemaker, Director

The Ninth annual recital with members of Richard Nunemaker's Clarinet Studio at this University presented an interesting program of standard recital works by several students and 2 world premieres as stated below.  Performances were high standard and continues a strong program to emulate.

" You can always be happy when you're playing music. And when you're laughing and smiling, you can't be evil."

The To Play is To Blow….To Blow is To Play… Ensemble

* Commissioned by The To Play is To Blow…

To Blow is To Play… Ensemble

Joe LoCascio, a native New Yorker, has resided in Houston since 1977.  A prolific performer/composer, he has sixteen recordings to his credit, many of them featuring his original music and most have attained prominent radio airplay nationally and abroad.  He has performed and/or recorded with jazz luminaries such as Chet Baker, Freddie Hubbard, Dave Liebman, Randy Brecker, Ernie Watts, Billy Hart, Tim Hagans, Conrad Herwig and George Mraz among others.  Jazz critics nationwide have acclaimed him as one of the finest artists on the contemporary scene.

He is currently Assistant Chairman of Jazz Studies at Houston Community College where he teaches Improvisation, Jazz History, Jazz Ensemble, and Improvisation Theory.

Ben Turner’s Blues is written in memory of Houston jazz legend Ben “Scatman” Turner (1927-2000).    Born in Marshall, Texas, in 1927,  Turner   moved to Houston when he was 17 where he spent the rest of his life accompanying jazz and blues artists in the Southwest area.  He is perhaps best known as the drummer in Arnett Cobb’s trio, a position he held until felled by a stroke in 1981.  Unable to play the drums, he continued, undaunted, as a vocalist who specialized in scat singing – especially the Blues.  He remained a vital fixture on the Houston jazz scene up to his death in 2000.

This composition was commissioned by Richard Nunemaker’s To Play is To Blow…To Blow is To Play…studio in the fall 2010.  It is a multi-sectional work consisting of an introduction followed by three variants on traditional blues which rely on meticulously scored ensemble work as well as the intuition of the performers as improvisers.