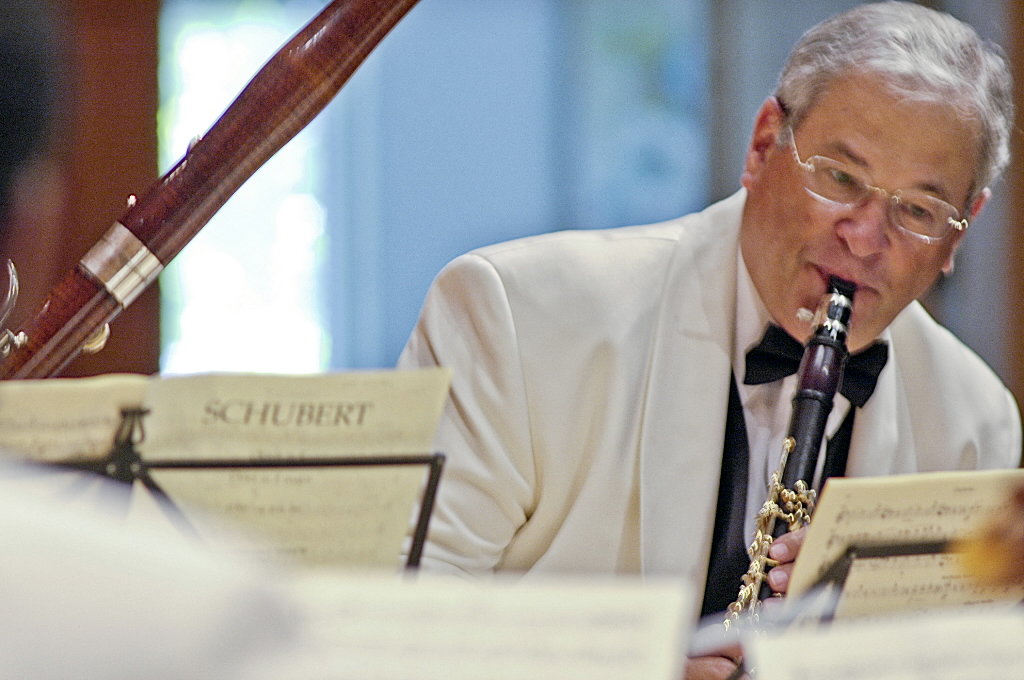 Chamber Music Northwest turns 40 this year, and David Shifrin marks his 30th anniversary as music director. The summer festival proper, which opens June 21 at Reed University's Kaul Auditorium, will celebrate with world premieres, old favorites and old friends, but the spotlight Friday night was on Shifrin, in a cozy gathering at The Woods, the former funeral home turned music venue in Southeast's Westmoreland neighborhood.

Shifrin typically plays weighty classics of the clarinet repertoire during the festival -- works such as Mozart's Clarinet Quintet and Olivier Messiaen's "Quartet for the End of Time," both of which are on the schedule later this month. Friday's easygoing program featured other fare. He called it "Clarinet Kaleidoscope," reflecting its wide range of styles, but he admitted afterward that he'd originally thought of it as "Clarinet Candy," which was fitting for a handful of bon-bons.
Music by three of clarinetists' favorite composers opened the evening. Mozart, who gets credit for writing the first great works for the then-new instrument in the 18th century, was represented by adaptations of two arias from "The Marriage of Figaro" and movements from divertimenti for two clarinets and bassoon (Portland Youth Philharmonic music director David Hattner joined on clarinet and PYP alum Keith Buncke on bassoon). Pianist Elizabeth Harcombe joined Shifrin for the rest, beginning with Claude Debussy's brilliant Rhapsodie for Clarinet and Piano and two classic Benny Goodman tunes, "A Smooth One" and "Rachael's Dream."

Shifrin remarked from the stage that people often ask whether he plays klezmer music -- he doesn't usually, but he proceeded to in the form of Béla Kovács' "Shalom Alekhem Rov Feidman," written for the Argentinean klezmer great Giora Feidman. A tribute from one clarinet legend to another, it captured the soulful melancholy that seems built in to the instrument.

Most of the rest consisted of raids into other instruments' territory: the Texas fiddle tune "Midnight on the Water;" the famous oboe opening to Bach's Cantata 156; Lennon and McCartney's "Hey Jude" (mercifully, Shifrin kept the "na na na" bit to a minimum); and transcriptions of Italian opera arias. He wrapped up with a bravura clarinet showpiece, Gioacchino Rossini's Introduction, Theme and Variations.

Throughout, the recital was a display of superb clarinet chops-quick fingerwork, colorful tone, big register leaps, liquid legatos, melting pianissimos, and even a bit of circular breathing in the Rossini. Harcombe's piano was big-with the lid raised, it barely fit on the tiny stage of what used to be the funeral home's chapel-but her sound was soft and her accompaniment sensitive. 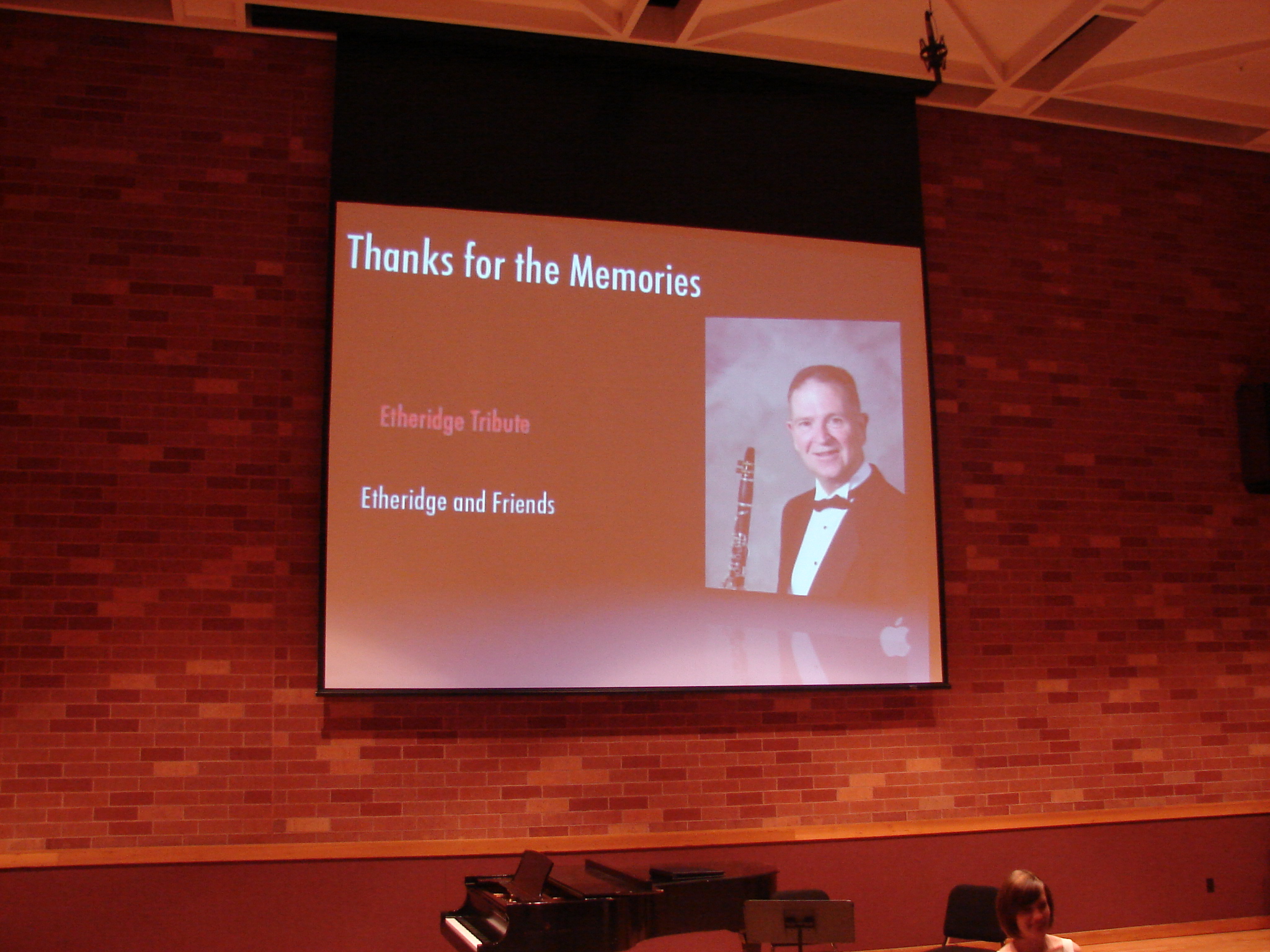 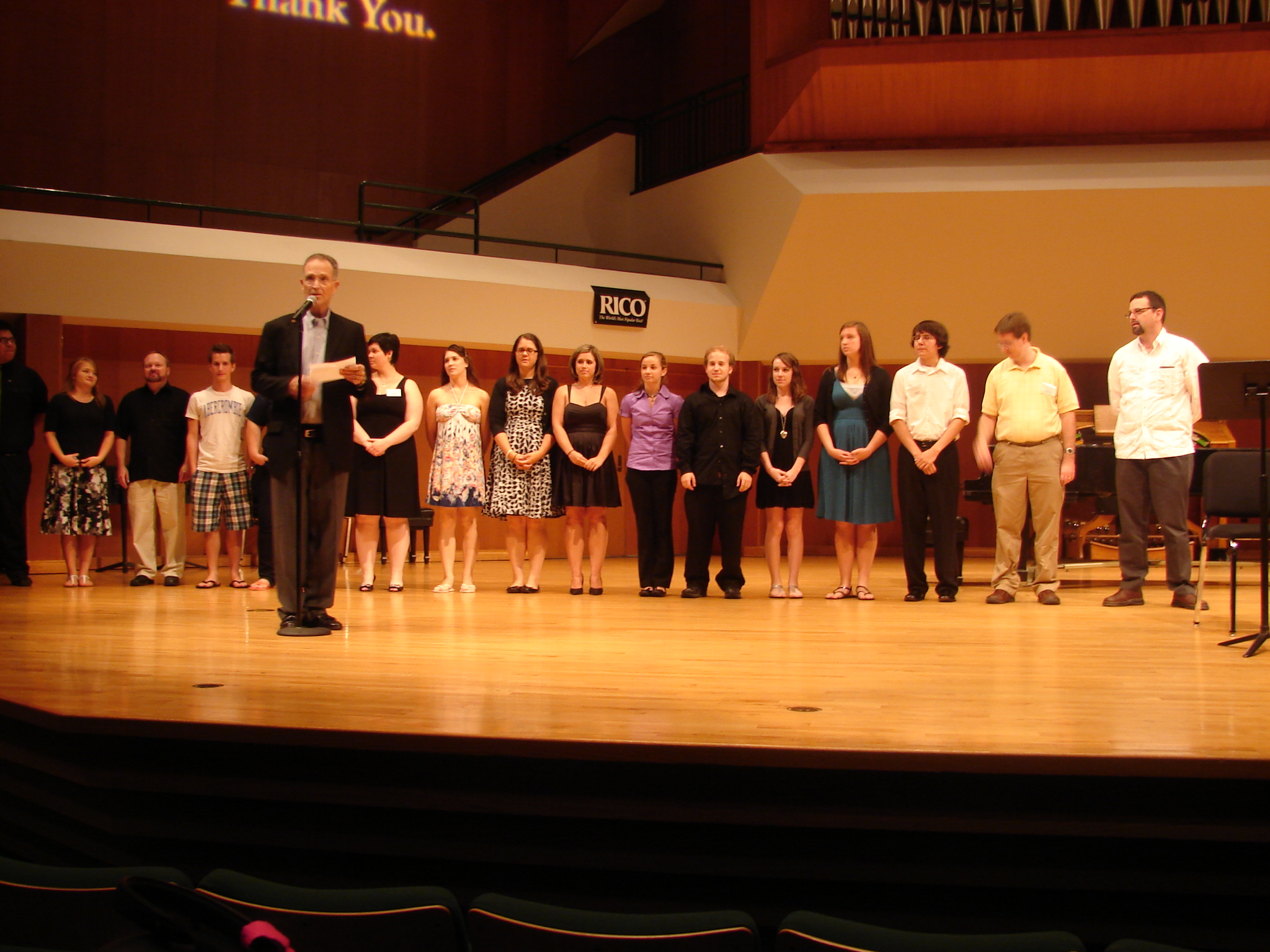 Probably the most noteworthy and memorable symposium since its inception 35 years ago, and the cumulative product of the work of its Director Dr David Etheridge, had accomplished a climactic result having many of the finest performer legend performers and teachers on this campus for 3 days of intensive activity.  Programs and galleried photos attest to what happened this week.  Among the legends included Stanley Drucker of the New York Philharmonic, Larry Combs of the Chicago Symphony, Alessandro Carbonare from the St Cecilia Orchestra of Rome and the Lucerne Festival Orchestra, Dimitri Ashkenazy from the Russian Republic, Jehuda Gilad, world class pedagogue from the University of California, and several others who are no less important in their credentials in the field.  A special tribute session was presented to David Etheridge from his students and professional colleagues celebrating his impact and contribution with a Book of messages personally signed by un-numbered admirers, with testimonials given to him personally in the Recital Hall before the participants.  Larry Combs, Anne Luyben, and several students came on stage to laud him.  One student made a telling tribute that of all the heroes of the clarinet she has seen here in the last several years, her real hero was her teacher here at Oklahoma.

As with many previous conferences here, the same program formats and events took place, such as Master Classes with faculty including Larry Guy (Vassar College), Julie DeRoche (DePaul University), Larry Combs, Alessandro Carbonare, Jehuda Gilad,  and Stanley Drucker.  All participating students were pre-arranged for each class.  Lectures on Clarinet topics were also presented as well.

Industry exhibits covering two rooms like past years included the major Clarinet makers, accessory producers, Sheet music dealers, and repair services provided for instrument adjustments.  During the 3 days, everyone visited these rooms and tried out clarinets, mouthpieces, and all else that was available.

A student Competition was held with winners recognized and presented prizes including Ben Armato's Reed Wizard and the Perfecta Reed measuring device.  Ben Redwine of Redwine Jazz presided on the Competition.

Several Recitals and Concerts were held during these 3 days as above galleried.  As well as the known artists playing and giving Master Classes, unknown worthy performers were featured, an important aspect of this symposium. Programs are galleried with photos from these events.

As all the information indicates above, this was one of the most meaningful of Symposiums presented from this University.  Unknown to most of the participants and friends,  Dr Etheridge has been in serious health with Cancer and now after this Symposium has been undergoing serious treatment with Chemotherapy.  Unfortunately, Dr Etheridge passed away 21 July.

In its 2nd year at Stony Brook University, this intensive artist bound conference was a major coup in its results and inspirations for all the selected student participants who came, about 21 in all.  Active students were pre-screened by audition, and had their hands full with critical study.  Programs and galleries tell the story with Master Classes, Faculty and the Finale Student Recital, and Stanley Drucker participating as faculty with a special recital.  As with the first year, the program was formatted to include sessions in Yoga at a beginning level by Director Michael Webster of Rice University to embrace the benefits of using this meditative physical and mental discipline with results showing in the students.  Each morning at 9 am the session began for 3 days, followed by a Clarinet warm-up session with Alan Kay, and Laura Flax (Solo Clarinetist in the NY City Opera Orchestra).  Reed making with Dr Webster available throughout the 4 days with blank cane on a Reed Machine.

Master Class coaching by all four faculty took place each day all day, with sessions on topics such as Orchestral auditions, Intonation compatibilities with other instruments, namely flute, a session on the role of the 2nd Clarinet in connection with the Solo Clarinetist with tips and rules of how and not how to play in that situation.  Laura Flax and her daughter (a clarinetist) demonstrated in a humorous way these rules and switching places to make their points about the subject.  All the classes placed the students in a critical place with the faculty coaching and seeing improvement in their playing and especially seeing the results at the Student Finale Recital.  Remarkable is the support the students gave each other during the sessions.  Of interest the humor got high with a session on Orchestral auditions with Alan Kay, in which the importance of playing perfect at an audition even under adverse conditions was demonstrated-  the student played standing flat up against the wall the Cappricio Espagnol (perfectly), then was made to put on a heavy coat, stand back at the wall, with hood over her head, and played it perfectly again.  Another victim student was made to run around the stage 4-5 times, then lie on his back and play the Brahms 3rd excerpts.   The idea behind this was to prep the student to handle almost anything so he isn't stressed out and cannot play.

Stanley Drucker performed a recital and gave a lengthy master class on Orchestral playing with insightful ideas tailored for each student covering important excerpts, that he has done in previous conferences this past year.  In collaboration with his coming, Buffet-Crampon displayed instruments for tryout with Chris  Coppinger and Wright Music.

On the final day, there was held outside a talk with Faculty and students in an open forum covering the state of the performing field, opportunities in developing your own chamber music organizations with expert input from Alan Kay and Michael Webster from their experiences, and contacting organizations such as Chamber Music America, which help those aspiring to move in this direction.  Military Band opportunities and their benefits were also covered.  It was highly recommended that those interested in College teaching pursue their degrees including the Doctorates.   Feelings about the music market were expressed with input from Laura Flax from how the Orchestral market seems to be eroding the USA, and the challenge that brings to those desiring jobs there.

Like the first year, the Clarinetopia was a landmark success.  As mentioned so many times,  it is necessary for aspiring clarinetists to be present and involved. The high school and college years are critical as that audition stage is ever too close to be aloof about taking on opportunities to learn and be critically critiqued. This program is specialized, and different from Showcase Festivals featuring many players, seminars, and 500+ participants.  Clarinetists should go to as many as they can to grow.  Credit is certainly due to Michael Webster, Alan Kay, Stephen Williamson, and Laura Flax, and the great University at Stony Brook.

V INTERNATIONAL COMPETITION
for the performance of the Mozart's concertos for FLUTE, OBOE, CLARINET, BASSOON, HORN and Orchestra