ClarinetFest 2010 at University of Texas at Austin,  Nathan Williams and Richard MacDowell, Directors, in collaboration with the International Clarinet Association - (ICA)

A very successful Festival was held at the University of Texas at Austin with a participant attendance exceeding 1300 and covering 3 Halls in performance in a modern Music and Concert facility.  Activities over these 5 days were round the clock with recitals, master classes, seminars, lectures, and more going on every hour with as many as 3 simultaneous events which made it necessary to pick and choose, something one did not want to have to do.

In addition, 3 rooms were packed with Music Industry exhibits from all the major Instrument makers, accessories, reed and mouthpieces, Bells and barrels, Sheet music, software programs, and busy customers trying and buying all the above.  The social mingling of participants including students, professionals, Professors, amateurs was enlightening and it was interesting to see some of the greatest players of note nearby browsing and interacting.   This makes it even more important for players to come to these events as it is nowhere else you can meet these people at the same time.  This is certainly a reunion of sorts never to miss.

The photo galleries posted here give an idea about the extensive nature of performances encompassing all venues of the literature and ensemble combinations.  Several premieres were performed, and the final 2 evening concerts including a Clarinet Quintet performance and the Concerto Concert were high points of this conference.  However, there were performances within the week that were equal in importance, especially a tribute seminar and recital with former Eastman students of D Stanley Hasty in his honor for his 90th Birthday earlier this year, and memoriam tributes to David Etheridge, who passed away on the first day of this Conference, 21 July.  The shock of his passing was felt everywhere and many broke into tears upon learning about it.  His Oklahoma Clarinet Symposium with him present was only one month before this ClarinetFest.  J Lawrie Bloom of the Chicago Symphony at a Bass Clarinet Concert here called for a moment of Silence, and at the Finale Mitchell Estrin conducting the Festival Clarinet Choir, dedicated a work on the program in his honor.  At the Closing Ceremony announcing awards and Clarinet Competition winners, Dr Etheridge was named along with other Clarinetists who have passed away this past year.

Due credit for this outstanding program goes to Nathan Williams and Richard MacDowell, both Professors at this University and the volunteer team that handled with near perfection the logistics that made all work well.   Words cannot say enough about the importance of being part of this Festival program and an intangible thrill and joy of being involved whether as a performer or an observer. Music making was at its best this week.

An interesting and date remarkable coincidence of performances of the famed Debussy Premiere Rhapsody at their summer outdoor festivals, the Waldebuhne in Berlin, and the Blossom Music Festival near Cleveland.  Both premiere solo clarinetists are hallmark performers as noted in their programs and WKA Officer VIP's.  The Berlin Philharmoniker's Digital Concert Hall where you can for the price of a concert ticket online can download the concert.  Later broadcast of this Cleveland Orchestra concert will be available.  Program information from Cleveland is galleried above and Berlin information hyperlinked here in this summary. 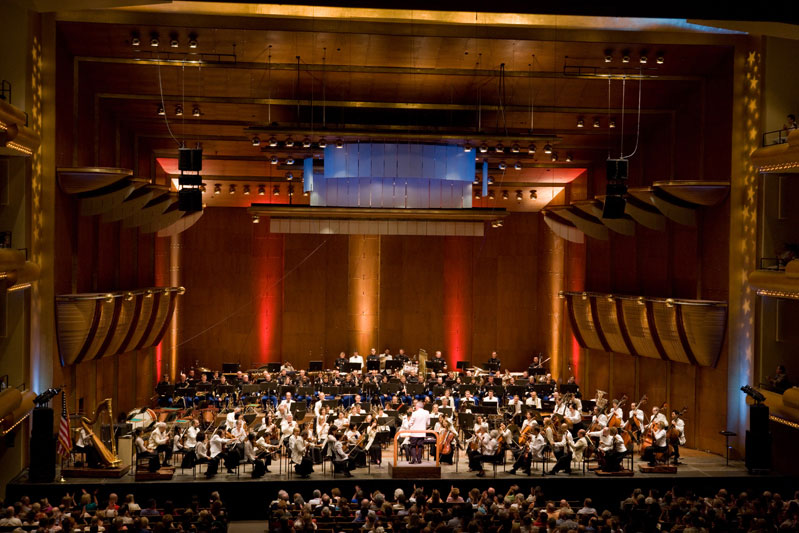 An historic appearance with this Premiere Band together with the New York Philharmonic in this Summertime concert performing patriotic Americana music, with a Band performance of Morton Gould's Symphony No 4  (West Point Symphony) written for this Band in 1952 and other works as stated in the review below including combined forces in certain works, a night never to forget with several curtain calls and standing ovations.  For Band members this a concert experience never to forget because of the virtuosic power performed here.  The Band performed 2 years ago to similar acclaim.

The New York Philharmonic’s Summertime Classics program “Strike Up the Band,” on Thursday evening at Avery Fisher Hall, while stopping well short of that extreme, skillfully avoided any hint of Russian triumphalism. Still, there was some confusion of nationalities.

Like all concerts in the Summertime Classics series, this was conducted by Bramwell Tovey, an Englishman. (So who did win the War of 1812?) Mr. Tovey said in his patter that he was “just here yet again to apologize” for British treatment of the colonies. And if he sang “God Save the Queen” to the clamorous strains of “America” in Carmen Dragon’s hectic medley “Memories of America” (so many tunes, a mere 12 minutes’ time), which opened the concert, only the players would know, and he could be forgiven.

With the Fourth of July still days off, Mr. Tovey, the music director of the Vancouver Symphony, noted that it was in fact Canada Day. There were no tributes to that Frenchish nation here, but the French themselves were cast in a more sympathetic light than in “1812.”

Except for the rudely honking taxi drivers: Mr. Tovey led a jaunty account of Gershwin’s “American in Paris,” with fine solos from Sheryl Staples, the concertmaster, and Philip Smith, the principal trumpeter. For Randol Bass’s “Esprit du Tour,” of 2006, a lively tribute to another American in Paris, the bicyclist Lance Armstrong, the Philharmonic was joined by the United States Military Academy Band, which shared the program.

But the most meaningful French connection came with John Philip Sousa’s “Hail to the Spirit of Liberty,” performed by the band under its conductor, Lt. Col. Timothy J. Holtan. The work was written in 1900 for the Exposition Universelle in Paris and the unveiling there of Paul Wayland Bartlett’s equestrian statue of the Marquis de Lafayette brandishing his sword in support of the American Revolution.

Another subtheme of the evening was the use of unusual percussion instruments. In Sousa’s “National Game,” of 1925, performed by the combined forces under Mr. Tovey, two baseball bats were struck together repeatedly as an eccentric, topical wood block.

But the real surprise came in Morton Gould’s Symphony No. 4 (“West Point”), a work written for the West Point band in 1952 and performed by it here under Colonel Holtan. As Sgt. First Class Jason Ham, a euphonium player in the band, explained from the stage, Gould’s idea, inspired partly by the cemetery on the West Point grounds, was to evoke the Long Gray Line, the generations of Army soldiers on parade.

A somber first movement, “Epitaphs,” gives way to the second and last, “Marches.” At one point a marching machine, a wooden contraption, is deployed to depict the clomping of multitudes, and the effect was deeply moving.

Also moving was a performance of Master Sgt. Douglas Richard’s “Armed Forces Service Medley,” of 2005, during which members of the audience and of both orchestras who had served in the military were invited to stand as they heard the themes of their respective branches.

Surely, the only way to end such a program was with Sousa’s “Stars and Stripes Forever,” and Mr. Tovey conducted both groups in a barn-burner. And the only possible encore was another performance of “Stars and Stripes,” this time with Colonel Holtan on the podium.

However in or out of fashion patriotism may be at the moment, this concert held an almost full house in thrall.