A like repeat of the 21 January Master Class and concert from Allentown was held at this University hosted by Dr Karen Dennasse and included a full day of seminars, a Clarinet Choir reading session for students, and a talk about Clarinet equipment such as mouthpieces, Reed measuring and fixing items such as the PerfectaReed and the Reed Wizard made by Ben Armato, retired Bass Clarinetist in the Metropolitan Opera, and made available through Ben Redwine, who is Eb Clarinetist in the US Naval Academy Band at Annapolis, Maryland.  Demonstration was made and students could later look at these items.  As Redwine is a Band member, he explained about the opportunities, audition procedure, and the jobs offered to those who want to consider a career including benefits.  The afternoon included a recital with VIP Mark Nuccio of the New York Philharmonic followed by an intensive Class with four selected students.  What was interesting was how the students were interacted with their own issues and how to intelligently solve through them on technical aspects, air stream and support and making music through all this.  The above galleries attest to the way the events turned out.

Both Ben Redwine and his firm Redwine Jazz and Mark Sloss, a major dealer of Buffet Clarinets and other products had tables for students to browse and check the clarinets and accessories.  Of interest is that the whole day was free to attend, and anyone within driving distance should always try to come to these events.  Some of the best things are free.  Credit is due to Director Karen Dennasse for making this day possible.

A very special Clarinet Day convened at this Music School located next door to the Allentown Symphony Hall and featuring members of the Orchestra and Music School faculty John Schwartz and Sanford Kravette, and the Clarinet Choir of over 65 participants conducted by Ralph Brodt III, and VIP Special Guest Mark Nuccio who gave an intense and inspiring Master Class and a challenging Recital.  Galleries have all the specific information about the entire day.  As with many event summaries, the intangible takes over for what really happened at the events.  Changes in the students playing was seen in every case.   Analysis of problems and solving were a major aspect dealing with each student.

Director Deborah Andrus gave a very quick and insightful seminar about tonguing and all its aspects with a handout for the students which is galleried above with demonstration on the ideas to embrace, from articulation, speed tonguing, legato tonguing and the like.  Following was a Master Class with John Schwartz with some students on musical playing and especially on Brahms and his Sonata #1.   Sanford Kravette gave a talk with student participation about the relevance of conducting and cueing and communicating with an accompaning partner with Clarinet and Piano.  Clarinet ensemble rehearsals took place preparing for a finale concert at the end of the day, with Mark Nuccio soloist performing the Rachmaninoff Vocalise with the Clarinet Choir.

The Clarinet Day was sponsored by the Music School, Buffet Group USA and Rico and Nazareth Music, who had exhibits displays of instruments, accessories to try and buy, well taken advantage by the participants.    This special time was well appreciated by those who came, over 100 from all over Pennsylvania, New Jersey, Connecticut, and New York.   An overview of the World Clarinet Alliance - WKA was introduced by Deborah Andrus with Mark Nucccio and Founder and CEO Mike Getzin explained the history, mission to serve all present with the website Resources and opportunities and further emphasized by VIP's Mark Nuccio and Director Andrus.   Of added interest, in a personal and humanity way, was the attendance of Jared Jannety, a young student who came in from Connecticut and who as a distinction played in the New York Philharmonic Clarinet section as part of a program Win(d) some Wish Come True from the Make a Wish Foundation and VIP Mark Nuccio who made this come true for this student, which surely was a inspiration.  Information galleried below.

Dr Andrus and the Community Music School is credited with the great success of this effort. 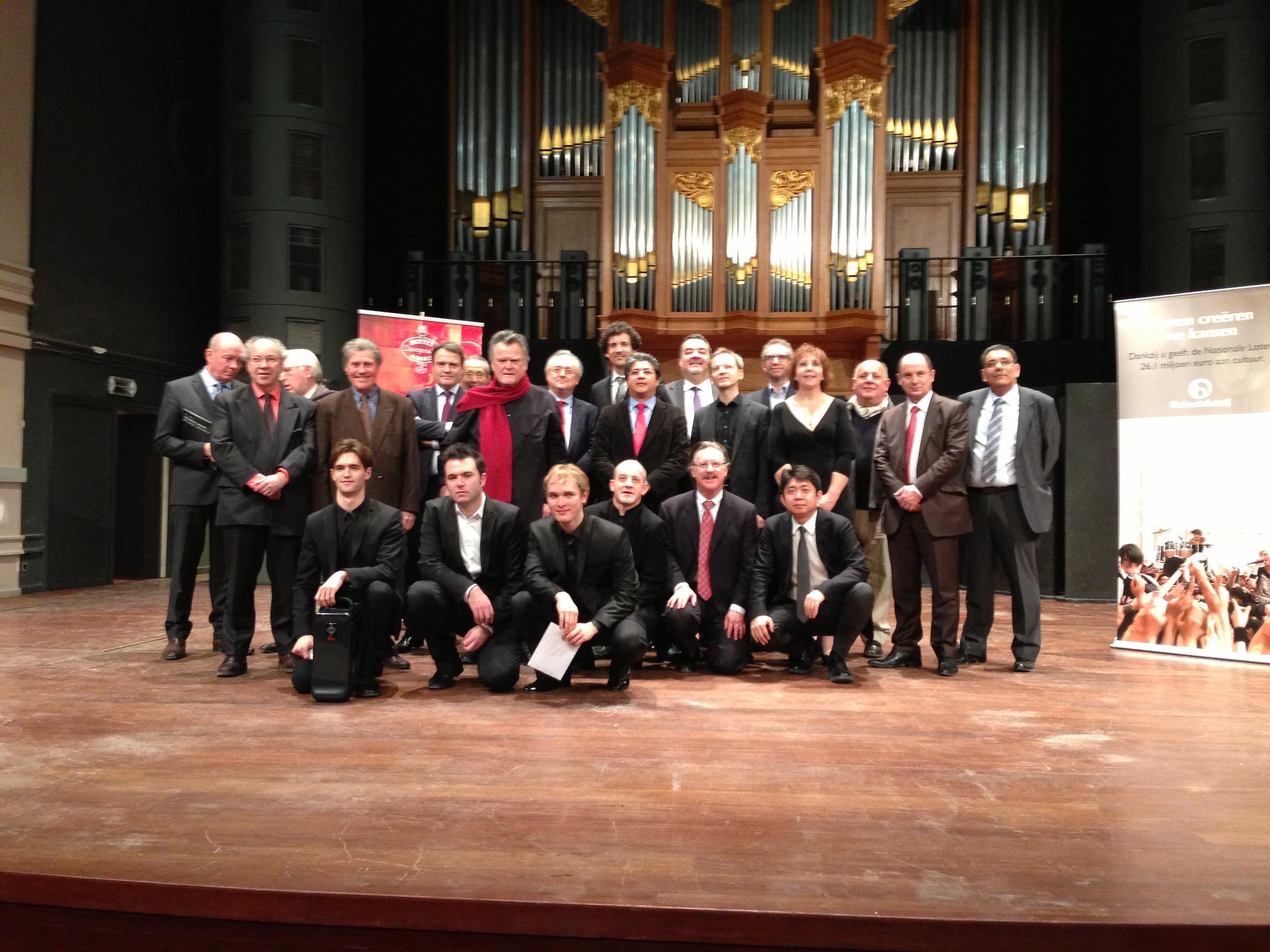 The highly renowned 3rd Competition followed by the 2nd European Clarinet Festival, headed by VIP Eddy Vanoosthuyse and supported extensively by the Belgian Cultural Ministry and several supporting Music Firms including Buffet Group in Paris, is a success beyond description, with an world-class array of Judges as described later here,   and an extensive winner's incentive with the awarding of generous prizes to those who achieve that win.   No other competition in Europe has awarded such a generous outlay to encourage contestants to pursue this challenge.  As this event has yet to complete, above are galleries with showings of what has so far occurred with more information to post later after the festival.

·                                 January 13, 2013 was the second Indiana Clarinet Day at Ball State University. Guest artist for the day was Campbell MacDonald, Principal Clarinetist with the Fort Wayne Philharmonic. Campbell played a unique program of "variations" which included "Mountains" by Cornelius Cardew, "New York Counterpoint" by Steve Reich, "Three Pieces" by Stravinsky and Weber's Concertino. Included in the day was clarinet performer, teacher and pedagogue, Daniel Healton who played a fantastic rendition of Eric Dolphy's "God Bless the Child" and led a fun-filled clarinet choir reading session in the morning. The day began with a short recital by Associate Professor of Clarinet, Elizabeth Crawford who played works by Guastavino and Panizza. Three of her students joined her for a fun arrangement of "The Abduction of the Seraglio" and Volume 2 of Dubois' Petite Devient Concert. The day ended with an informative and inspirational master class by Campbell MacDonald.


Please look out for information about next year's event to happen some time in fall 2013. Guest artist will be Southern Illinois University's Eric Mandat.

ChamberFest Cleveland: A Gala to Benefit

It's been about a month since the last Cleveland Orchestra concert -- and since I've been burning the candle at both ends (and sometimes in the middle) with work, I've enjoyed the quiet time. I return to Severance Hall tomorrow night, but tonight was the magical Gala Concert to benefit ChamberFest Cleveland, entering its second season. Long-time readers of my blog know my appreciation for the talents of the Cohen family, and Garrick Ohlsson contributed wonderfully to a flawless evening.

While the piano used for this evening's performance was not the largest, Garrick Ohlsson dominated the room and the performance, starting with the bouquet of fragrant notes that overflowed the room like the audience assembled for the performance. Brahms's Rhapsody in B minor was filled with tension and release like a passionate romance -- from a fiery embrace to a quiet walk in seclusion.

Franklin Cohen joined Garrick Ohlsson for the Allegro appassionato movement from Sonata for Clarinet and Piano No. 2 and the sensation shifted from one of romance to one of a dinner between long-lost friends telling the same story with a slightly different line -- and it seemed like Mr. Cohen and Mr. Ohlsson were completely at ease with each other. That ease, it turns out, may be attributable to the two musicians growing up in the same town and attending Julliard with only two years between them.

Diana Cohen traded places with her father for Cesar Franck's Sonata in A Major and I found the combination of the light and lofty notes from her violin an interesting contrast to the grounded, earthy sounds of the piano, which combined with this weekend's fine weather left me imagining a balloon (the violin) traversing the countryside (the piano) -- until the violin gets caught in a tree, and after some anxious playing, breaks free.

After three pieces filled with imagery, Chopin's Barcarolle in F sharp major was beautiful solely from the notes rising above the piano and filling the room; at one point I looked to my left at Rachel -- engrossed in the music -- and couldn't readily determine which was more beautiful.

Mr. Ohlsson provided a fascinating and engaging conversation with the audience where he discussed Scarbin in the context of Chopin, and got sufficiently excited to warrant an insertion from Scrabin's early period -- Opus 2 Number 1 -- over the objection of none of the asembled group. The two poems left me somewahat wondering, but the pianist's comment at the end captures it better than anything I could have: "Do you find it remarkable that 100 years later, this music still sounds new somehow?"

The last piece on the program were the three movements from Bartok's Contrasts for Clarinet, Violin and Piano -- a piece that Messers Cohen and Ohlsson first played together at Lincoln Center some 45 years ago while students in New York -- Mr. Ohlsson reportedly has the original music with Mr. Cohen's name and childhood address stamped on it. The emotions evoked ranged from the meandering, uncertanty with stormy rage of the first movement, to foreboding in the second movement, and an intense, bouncy jaunt through city traffic -- with hints of the jazz era -- at the conclusion.

Berliner Philharmoniker legend and Senior VIP Karl Leister quietly marked his 56th year in the Performance profession approaching almost 3 generations, a track record only surpassed by his New York Philharmonic colleague and friend Stanley Drucker, and both are still actively performing to super-artist standard and performing Internationally on tours, and giving Master Classes and being Jurists for International Competitions, one of which is in progress at Ghent Belgium.   Highlights of Leister's career is posted on his VIP Page and he has made over 100 major Solo and Chamber recordings.  Clarinetists should study what he has given us through listening to his recordings and viewing DVD's of the Berlin Philharmonic which is available.  Even seeing these now rekindle a standard of Orchestral playing almost unmatched anywhere.