A series concert held with two select auditioned Bands featured Solo Clarinetist Stanley Drucker in performance of two major works well known to students in their advancement as players, the Weber Concertino Op 26, and the Rossini Introduction, Theme and Variations, along with the above posted programs.  Unique is not so much  the Drucker performance, which was a major inspiration for all the students, themselves performing on stage with probably the most stellar of Clarinetists of our time, but the spirit of which this performance represents.  Both Stanley and his wife Naomi Drucker are staunch supporters of this organization, the Nassau-Suffolk Performing Arts, which have as their objective to support Music Education covering over 50 School Districts throughout Long Island and engaging top flight soloists to enrich their reach to young people.   Due recognition was announced honoring Ms Drucker for past support over many years with performances throughout the Island along with husband Stanley Drucker.  Outside this region, many would never know the extent of their contribution.  The concert was a notable success as students in fine performance, in a stellar Tilles Performing Arts Center Concert Hall at this University.

On the 23rd and 24th of January 2010 R. Viani” International Clarinet Competition took place in Carpi (Modena) Italy. Rino Viani was a former clarinet teacher of the Carpi Music Academy for many years. The participants of the two categories came from many Italian cities, from Switzerland, Greece, and Spain. The members of the jury were: Corrado Giuffredi, Massimo Ferraguti, Luigi Magistrelli, Anna Maria Giaquinta, Ivan Bacchi, Fabio Di Casola, solo player and principal clarinet of the Winterthur Orchestra.

Three Clarinetists have been selected through three rounds : Giovanni Punzi, Angelo Montanaro, and Simone Nicoletta. The required pieces were the Weber Clarinet Concerto Number  1 ( first movement), Debussy Rhapsody and Stravinsky 3 pieces for the second round.

They performed the final round in a public concert the Mozart Clarinet Concerto with “G. Verdi” Parma Chamber Orchestra 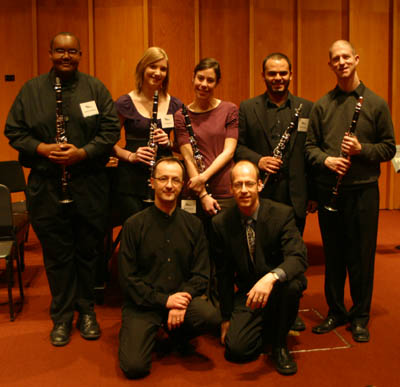 By Terri Baumann and Marjorie Shearer

Each winter, Northern Illinois University hosts its annual Clarinet Cornucopia, a day-long event for students and clarinet aficionados that includes recitals and master classes centered on a unique theme. Derived from the creativity and enthusiasm of Professor Dr. Gregory Barrett, this year’s theme was “Finnish Modern,” and Mikko Raasakka, the principal clarinetist of the Jyväskylä Sinfonia, flew in from Finland to serve as the event’s guest artist.

The day began with a master class for clarinetists outside of the Northern Illinois studio, which was led by Gregory Barrett. Following the master class, a rehearsal was held for the clarinet choir piece, Vento, by Finnish composer Jukka Tiensuu.  Vento was both a rhythmically and technically challenging work that had unique form and required the performers to march onstage to their chairs. Each year, conductor Patrick Sheehan serves as the ensemble’s director.

A lunch break was provided for the participants with the opportunity to visit vendors’ tables with Buffet clarinets from Lisa’s Clarinet Shop (Lisa Canning) and Rico products with Mike Zucek.

After the break, a Finnish modern recital was performed by Mikko Raasakka and Gregory Barrett with works by Jukka Tiensuu, Leevi Madetoja, Anti Auvinen, Timothy Page and Riikka Talvitie. A piece written by Professor Barrett, called the Mooseling Quartet, was also played and featured Northern Illinois University graduate students Rachel Braband and Rich Moore. The recital was thoroughly enjoyed by the participants. Glynnis White, a sophomore music education major at Northern Illinois, said, “I really enjoyed the recital because of the bass clarinet parts that were throughout the recital...it was really interesting.”

Next on the event schedule was the master class with Mikko Raasakka featuring Northern Illinois graduate students Anthony Armstead, Rich Moore, Marjorie Shearer, senior Ramses Bugarin, and freshman Terri Baumann. Local clarinetist Frank Delo enjoyed the master class because of Raasakka’s unique perspective. Delo said, “Despite a slight language barrier, the master class was a success because it was beneficial to both the performers and the audience.” Raasakka focused on the flow of phrases and different colors in the pieces performed. He also promoted and incorporated concepts from his new book on extended clarinet technique, Exploring the Clarinet such as slap tongue and glissando.

The 2010 Clarinet Cornucopia was an immense success. The “Finnish Modern” theme offered participants insight on a national style that they may have been unfamiliar with otherwise. Delo, who attends the event every year, said, “The Cornucopia is an affordable yet invaluable resource for student and teacher alike. It provides an opportunity to all involved to learn and even compete in a cooperative educational environment.” He added, “The open-minded clarinetist of any level is guaranteed to gain something from the experience. I highly recommend it.” Anyone who has ever attended Clarinet Cornucopia will surely agree.

As noted with the above program with the soloists and Orchestra, the performance warranted notice and given at the Martucci Consevatory in Salerno, Italy.  The principal soloists, Antonio Fraioli and Valeria Serangeli, made notable performance with the Wind Ensemble of this Conservatory.  Program and information posted in the above gallery. 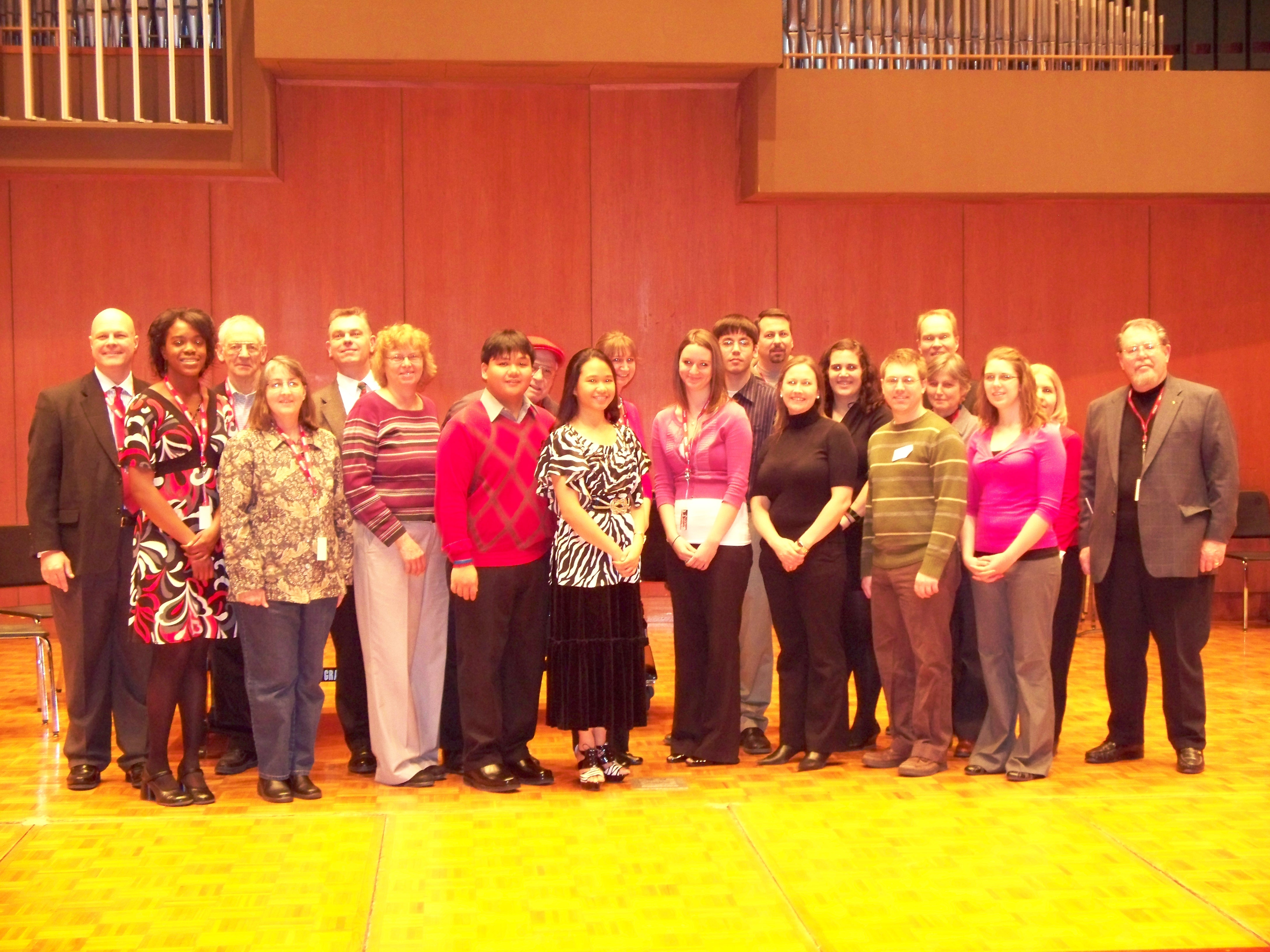 The third annual Wright State University Clarinet Symposium hosted by Dr. Randall S. Paul was held on January 16, 2010.  Judging from the number of people who attended and the size of their smiles, it was a huge success.

The symposium’s opening concert was presented by the Huffman Prairie Winds (woodwind quintet) of the Wright-Patterson Air Force Band of Flight.  The group played with brilliance, clarity, precision and humor.  The ensemble’s clarinetist, Staff Sergeant Mary Fessner-Tarjany, distinguished herself by her beautiful sound and flawless technique.

Following the concert Carl H. C. Anderson, the symposium’s Guest Artist, gave his first of three masterclasses of the day.  Here he worked with Senior music education major Jessica Calvelage performing Brahms’ clarinet trio with bassoon replacing the cello.  In addition to many insightful comments about the performance, Mr. Anderson related some very interesting and seldom heard historical details that made all of us realize how fortunate we are to have our four works by Brahms.

Next, Mr. Anderson conducted a seminar entitled “The Importance of the Clarinet Ligature.”  He demonstrated and allowed participants to try out over 15 ligatures from various manufacturers and time periods.  “The best ligature you can possible get is your thumb,”  said Anderson.  His premise in selecting a ligature was to try to find a ligature that matched the sound when he used just his thumb to hold the reed on the mouthpiece.  One of the discoveries the participants made was that significantly different results were produced by gold versus silver ligatures of the same manufacturer.  Mr. Anderson’s favorite ligature?  It’s the original Kaspar Superb now being offered by Muncy Winds while supplies last!

Following Mr. Anderson’s seminar, Wallis Vore, Artist-in-Residence and Faculty at Bay View Music Festival, gave a detailed presentation of practical steps of how to build one’s private lesson studio.  As she currently has over 70 (!) clarinet students in her studio, all of what she said was informative, practical and, more importantly, proven to work!

Dr. Daniel A. Popracki from the University of Wisconsin at Parkside followed with a lecture entitled “Practice Strategies and Techniques.”  This was an entertaining presentation that included 30 useful tips for clarinetists of all ages and abilities.

Following a delightful catered lunch for all attendees, Mr. Anderson resumed his master class series by working with Wright State students Matt Snyder and Aaron Schmid playing Spohr’s  and Weber’s Concerto #2 respectively.  Mr. Anderson clearly demonstrated his 30-plus years of extraordinary pedagogical expertise in the way he quickly got to the issues with humor, enthusiasm and precision.

A round table discussion followed led by Mr. Anderson along with Ms. Vore, Dr. Popracki and Dr. Curlette.  Many topics were discussed, including what equipment the guest artists used and how one goes about picking out an instrument.  Mr. Anderson led an insightful discussion on how we should always gauge our expressiveness by imagining how the person with the untrained ear would hear us.

The huge Bellbrook High School Clarinet Choir under the direction of Barbara Siler followed with a truly admirable performance including the difficult Prelude and Allegro by Arthur Frackenpohl.  The Wright State University Clarinettes du Monde followed with a performance that exemplified consummate command of technique and control.

One more master class with Mr. Anderson rounded out the day.  WSU Sophomore Sarah Beatrez showed a maturity beyond her years with her performance of the Mozart Concerto.  Even on a piece as well known and as researched as this concerto, Mr. Anderson was able to provide interesting information about the history of the concerto and how it should be reflected in our performances today.

Mr. Anderson’s evening recital was the climax of the symposium.  Performing pieces by Ernst Toch, Carl Loewe and J. M. Molter, Anderson played with a gorgeous tone and a flawless legato.  Performing on D clarinet for the Molter, Anderson’s sound was wonderfully fluid and relaxed for such a small and often-times cantankerous instrument.  Always the teacher and facilitator, Mr. Anderson introduced each piece with comments and observations that drew the audience in and made them feel part of the performance.

All in all, the 2010 Wright State University Clarinet Symposium was a wonderfully successful occasion where everyone had the opportunity to celebrate the clarinet as well as learn more about it.  Carl Anderson’s enthusiasm for the clarinet coupled with his expertise in teaching and superb playing was an inspiration to everyone.  Kudos to Dr. Randall S. Paul for hosting such an effective and encouraging event.

A unique concert recital of musicological interest was performed and lectured featuring music and historic clarinets performed on from music of those eras with Charles Neidich, who played music with instruments as they would have sounded in those times in music history.  Pianist on this recital was Russian pianist Marina Gorokholinskaya, a major performer.  Program posted above relates to the instruments, which were reproduced largely in part by German makers Schwenk & Seggelke using materials of that period.  Careful adherence to the style and the key system as indicated above was done with incredible performance.  Boehm system was used only in the modern works in the 2nd half of the program, namely Neidich's Threnos for Solo Clarinet, written for the Tsnunomi victims in 2005, and this performance for the Haiti victims of the devastating Earthquake just happened.   During this performance, Mr Neidich discussed in detail the evolution and use of the early clarinets and the composers and the dedicated performers who they were written for, particularly Muelfeld for which the Brahms Sonatas, Trio, and Quintet were written for, and what the players did in influencing the composers.  The full house audience was well appreciative of the whole affair which was entertaining and high standard in total presentation.

In the Houston Texas area there are many musical accolaides including the Houston Symphony, an Orchestra that Mr Nunemaker recently retired and now active as Faculty at the University of St Thomas.  Rice University is in the same city with a solid Clarinet Studio under Michael Webster.  The Clarinet Studio under Mr Nunemaker includes advanced students and professionsls who here performed a major program as the above galleried program presents, including a World Premiere of a new work named Chestnut Variations by Robert Nelson.   Performance was solid with a varied program with students performing.