A magnificent touring engagement at Carnegie Hall in New York with probably the finest Orchestra in the world had 3 great concerts including a premiere of the last unfinished movement of Bruckner’s 9th Symphony, and the Mahler 2nd Symphony (Resurrection) which this Orchestra premiered in 1895, conducted by Sir Simon Rattle at all 3 performances.  Information about these programs hyperlinked from reviews from the New York Times.

For Clarinetists, this was an important few days as the opportunity to witness two major Master Classes, one at Manhattan School of Music with Wenzel Fuchs, Solo Klarinettist, hosted by Mark Nuccio, Solo Clarinetist in the New York Philharmonic, to a packed recital hall for a 2 hour session with Pre-selected advanced students.  Several established professional players and Professors from as far as Chicago came to see the class and see the great results in concept pathways passed on to the students participating from Maestro Fuchs.  Programs from the Classes are galleried including the Juilliard Class.

The Carnegie Hall Professional Development Division hosted two Master Class agendas one day apart, one with the Woodwind Principals from the Berliner Philharmoniker including Wenzel Fuchs, Albrecht Mayer – Principal Oboist, and the Principal Flutist and Bassoonist.  They held their 2 hour class in separate rooms, and to conclude, all came together in the Juilliard Orchestra Rehearsal Hall for an Orchestral seminar where all spoke about the importance of the positions and audition preparations and priorities.  The attendance at these sessions were full on both days, the 2nd with the Brass Principals.

Together with the great performances of the Orchestra and these Master Class events, one comes away inspired to take a new outlook on playing and music making to a new level. Here is where the push to grow really made a difference.

In what has become an annual tradition (last year and the year before), Cleveland Orchestra member and Clarinetist Franklin Cohen joined with his daughter talented violinist and Richmond Symphony Concertmaster Diana Cohen as well as other friends to honor the memory of their late wife and mother Lynette Diers Cohen through an afternoon of music.

Along with three of the musicians whom I hold in the greatest esteem (Mr. and Ms. Cohen and Cleveland Orchestra cellist Tanya Ell) and who have in years previous, this year brought the addition of fellow Orchestra member pianist Carolyn Warner.

One of the things I love about concerts like this is in addition to the more intimate nature of chamber music generally is that the hair gets let down and you get a bit more of a peak at the musicians' personalities and history. This evening Mr. Cohen related a story about the first concert engagement where he, the late Mrs. Cohen, and Diana were scheduled to play Mr. Cohen found himself so preoccupied by making sure young Ms. Cohen had everything she needed that he forgot to bring his clarinets. Needless to say, that concert started a bit late.

This afternoon there was no such delay and the concert was an entirely decadent burst of music on a gray day. First up on the program was Beethoven's Piano Trio for clarinet, cello and piano: The first movement was full of life and set a deliciously sweet tone to the afternoon before diving into a second movement which was set off by a profoundly mournful cello that was embraced -- almost as if the arms were firmly wrapped around -- by the clarinet. In the third movement, the piano lead a happier mood with a celebratory theme that bounced from clarinet to cello and back before turning stormy and a bit more wistful

An addition to the printed program, Mr. Cohen introduced composer Paul Ben-Haim as one of the forefathers of Israeli music and played two of his pieces (Based on the introduction I believe -- but am not positive -- that they were from Song Without Words. Please correct me.) the two, played by Mr. Cohen and Ms. Warner, brought a haunting combination of songs and a lingering/wandering feeling.

Last before intermission, the Andante con moto tranquillo movement from Mendelssohn's Trio in D Minor which certainly brought forth a feeling of beautiful tranquility and had a sweet harmony between the Ms. Cohen's violin and Ms. Ell's cello supported by beautiful work by Ms. Warner at the keyboard.

A free-will offering was made and Diana Cohen announced that the proceeds would go toward a fund in her mother's memory at ChamberFest Cleveland (see here for my recap of the inaugural benefit) and after intermission the program started to wind down beginning with Adagio from Dimitri Levkovitch's Trio #1, which I found as a tremendously expressive piece that propelled me to a delightfully meditative space and I felt that the playing was exceptionally strong in a concert full of strong playing.

Before the final piece on the program Mr. Cohen made the apt observation that while dedications were being made, as a musician really every note he played is dedicated to someone and has bits of the essence of those who have taught and shaped him and the same is true of his students. And that was a wonderful sentiment, the program closed on Brahms' Clarinet Trio. The first movement was beautiful but had a more relaxed sound than the adagio tempo notation would have lead me to expect. and the second movement adagio was achingly sweet and tender. The third movement sweet enough that I let myself just get lost in the music and the analytical part of my brain stepped out for the movement. The final allegro had more of a conclusive feeling  and seemed to be a natural end to the tension of the piece and a delightful end to a fantastic concert.

In the Spring of 1972 The Grenadilla Society (as it was originally known) was born with the publication of  The Clarinetists’ Solo Repertoire – A Discography by Richard Gilbert.  This was the birth of a new company that would become a leader in clarinet recordings, publications for clarinet and contemporary classical music recordings and concerts.

The following year Mr. Gilbert was invited to the National Clarinet Clinic in Denver Colorado by Ramon Kireilis to speak to the large assembly on his book and to present three distinguised world premiere recordings: Alan Hovhaness’ Saturn featuring clarinetist Lawrence Sobol; Ned Rorem’s Ariel featuring clarinetist Joseph Rabbai and Dominick Argento’s To be Sung Upon the Water featuring clarinetist Charles Russo, all for Soprano, Clarinet and Piano and were all composed in 1971.  From all accounts this presentation was very well received as were the discography and the recordings..

It was during this time that the International Clarinet Society was formed with Mr. Gilbert taking on the responsibility of recordings editor with the byline, Going on Record. 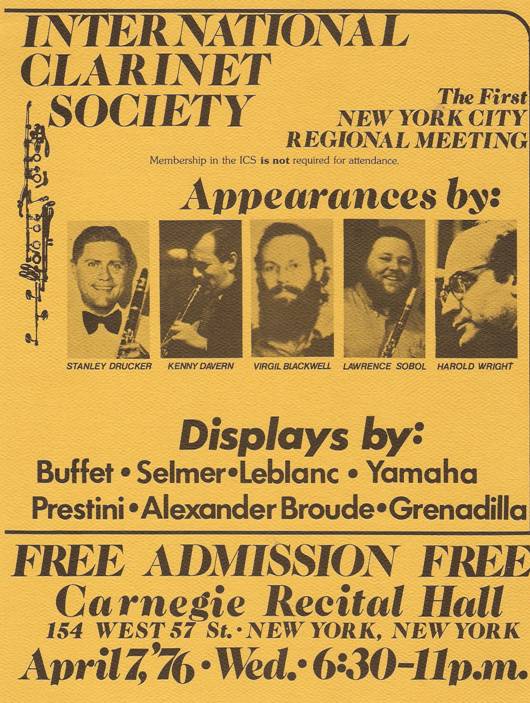 Over the last forty years Grenadilla has released over 200 recordings and publications and has recently published three new books:

w The 20th Century & Beyond – A Clarinet Discography by Richard Gilbert

Frederick Fennell and a Preface by Karel Husa

on the works of Dahl, Diamond, Harris, Husa and Walter Piston.

Grenadillamusic.com will be releasing several wonderful recordings throughout the anniversary year ~ stay tuned.

The Royal Northern College of Music is pleased to announce that Spanish clarinettist Rocio Bolanos has been awarded the inaugural Buffet Clarinet Scholarship, marking the start of a new partnership between Buffet Group and the RNCM.

Rocio Bolanos will be performing at the RNCM on February 17th, for the RNCM International Artist Diploma Clarinet Recital - Read more and purchase your tickets today

“I started to play the clarinet when I was seven at a school of music in a small village where I lived with my grandparents,” says 25-year-old Rocio, a former RNCM Junior Fellow. “My grandmother really liked music and wanted me to study it – that’s the reason I became a musician.”

Continuing her studies with Antonio Salguero (himself a Buffet Artist), Nicholas Cox and John Bradbury, the Buffet Clarinet Scholarship will enable Rocio to join the RNCM’s prestigious International Artist Diploma course this September.

She adds: “I’m very pleased and happy about the Buffet Scholarship and hope to be able to show them what I can do on the clarinet. In the future I hope to be principal clarinettist in a major orchestra or perform in a chamber ensemble; it’s all about enjoying the music and showing how beautiful and powerful it can be.”

Burt Hara, principal clarinetist of the Minnesota Orchestra, joined director and host, Greg Barrett for the 2012 edition of the annual NIU Clarinet Cornucopia: The Clarinet and the Orchestra. Approximately seventy student, professional, and amateur clarinetists converged on DeKalb, Illinois for a day of concerts, master classes, rehearsals, and in keeping step with choir director Patrick Sheehan’s arrangement of the fourth and fifth movements of Berlioz’ Symphonie Fantastique, French-themed treats for snacks at the day-ending reception.

Burt Hara’s overflowing musicianship and passion for music, combined with his decades of experience as one of our leading principal clarinetists made for a stunning afternoon recital and master class double. Focusing on most effectively portraying the character of the music, students from Luther College, Northern Illinois University, and Northwestern University were guided to strengthen their own ideas of their repertoire’s meaning. The students learned new-found control of the clarinet from a clear explanation and demonstration of voicing by Mr. Hara. Contrary to past oft-taught ideas not to change the tongue position while playing in different ranges, Burt stressed that the clarinet can be played more effectively by allowing the tongue, and consequently the voicing, to become lower as one ascends in range through the notes of the third and fifth partials. Whether playing the slow movement from Beethoven’s Symphony Nr. 6, the corresponding movement from Shostakovich’s Symphony Nr. 9, or any other passage moving through the third partial, a more beautiful and reliable result can be achieved by lowering the tongue and feeling of the direction of the airstream as one ascends. No biting, simply lower the tongue and wait for a proper, unforced altissimo D to sound. Same procedure for the altissimo G concluding the Trio of Beethoven’s Symphony Nr. 8.

Kudos also to the morning master class participants, Addison Herr and Taylor Criswell-Isberg, and to morning recitalists, Amanda Kayser of Northern Illinois University and Kathy Pirtle of the Orion Ensemble and the Lake Forest Symphony. Ms. Pirtle’s Clarinet Ensemble from South Hinsdale High School added to the enjoyment of the evening Ensembles Concert as did the ensemble under Steve Boyd’s direction from Ironwood, Michigan.

We hope you will join us on March 9, 2013 for the next NIU Clarinet Cornucopia: Clarinets Playing Together with Catherine Hudgins and William Hudgins of the Boston Symphony Orchestra.