If you were one of the 25 people in the basement of the DiMenna Center last Friday, you were among the lucky few who witnessed a truly remarkable performance by preeminent French clarinet quartet Quatuor Vendôme. Formed in 2002, QV’s members—Alexandre Chabod, Julien Chabod, Nicolas Baldeyrou, and Franck Amet—also hold full-time positions in some of France’s top orchestras and conservatories.

In addition to being exceptional clarinetists, the four are also gifted arrangers, orchestrating many of their pieces themselves. As far as clarinet quartets go, QV is unparalleled in all aspects of their artistry: their sound is consistently homogenous, their technique is exceptionally virtuosic, and their intonation is inhumanly close to perfect.

Opening the program, QV energetically bounced through a Baroque-style quartet by Jean-Phillipe Rameau before moving on to an opera fantasy based on themes from Rossini’s Barber of Seville. Equally at home as soloists and accompanists, the quartet rotated parts throughout the evening, giving each player a chance to shine. Technically speaking, they hopped around the instrument with great facility, and with the utmost sensitivity, QV seamlessly faded in and out of each other’s sounds.

Jon Manasse, Pascual Martinez Forteza, Liam Burke, and David Gould—joined QV for three octets by Astor Piazzolla. As an eight-some, the group produced a hearty sound that remained just as unified. Jazzy, sexy, and distinctly Latin, the players ripped through the glissandi-filled solos with flair; the octets proving to be a blast for both the players and audience alike.

Back to the original roster of four, QV presented an original piece composed for the group, Prelude et Funk by

Flower Duet and Gershwin’s "Oh, Lady Be Good!” Both sweet and lighthearted pieces, QV left the all-too-tiny audience eager for more. This event was sponsored by Buffet-Crampon and Vandoren. 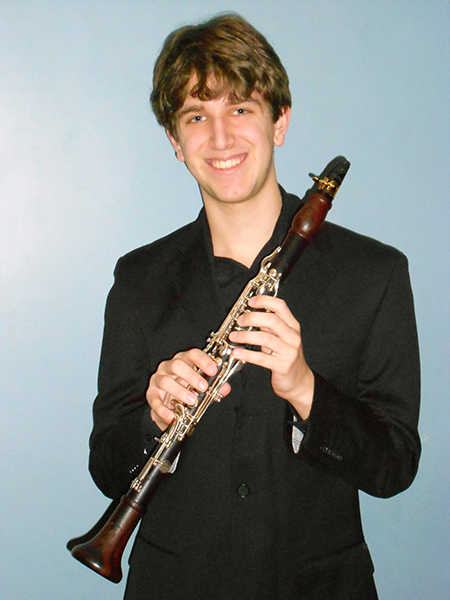 David John Davani may seem like your average freshman at Stony Brook University.  He is 18 years old, is a resident of Tabler Quad, and is in the Honors College.

However, how many freshmen, let alone students at Stony Brook have been honored for the second time by the National YoungArts Foundation—last year for clarinet and this year for baritone voice—and have recently won the Stony Brook Undergraduate Concerto Competition? Not many.   Davani is originally from Sea Cliff, N.Y., and is currently pursuing a dual degree in biology and music.

The multi-talented musician says his taking up the clarinet were weighed by two factors: the first, being his grandfather, who also played the same instrument, and the second being an odd encounter at about nine years old with a jazz band clarinetist on a family trip down in New Orleans.   “He pulled me over and said that I looked like a clarinetist,” Davani said.   Evidently, the jazz band clarinetist down in New Orleans was right, because the young undergraduate student has proven his impressive musical abilities in more ways than one.

Although he took it up in elementary school, Davani says he did not seriously start studying the instrument until the sixth grade, when he enrolled in the preparatory division of Mannes College The New School For Music, located in Manhattan.

“I really love the instrument,” Davani said. “I felt very seriously about it.”

The clarinetist expressed his gratitude towards the impressive duo of instructor David Sapadin and mentor Naomi Drucker, both of whom have helped him excel and advance his musical talent.  Sapadin is a freelance clarinetist and a regular player at the Metropolitan Opera and Drucker is a clarinetist of the American Chamber Ensemble, as well as wife of Stanley, the principal clarinetist of the New York Philharmonic for 60 years.

Davani entered his first National YoungArts Foundation competition during the beginning of his senior year of high school and was recognized as one of the 2012 winners for clarinet.

Up to 150 Young Arts winners are chosen across the country, to participate in master classes, performances, workshops and the opportunity to win up to $10,000 in individual prize money.

“As a musician, I felt good and I was happy to win,” Davani said. “Competitions are subjective and I put my heart and soul into it.”

One could tell by his second winning of the National YoungArts Foundation competition that clarinet is not the young musician’s only musical talent.

His powerful baritone voice won him the competition the second time around where hewas recognized as one of the 2013 winners.

Davani explained that he never really competed on voice until the Young Arts competition.

“Except for recitals, I felt the need to keep my voice to myself,” he said. “People would hear me sing and be shocked because it was nothing like my speaking voice.”

Metropolitan Opera and be able to sing on that stage that I visit so frequently every year,” he said.

For a short time during his later years at Mannes, Davani was a member of the Select Chamber Choir, in addition to being the principal clarinetist of the Preparatory Philharmonic.

At the end of his senior year in high school, Davani auditioned both voice and clarinet on the same day for Stony Brook University’s music program.

For voice, he was accepted to take lessons and is currently studying with advanced doctoral student Christopher Reames.

For clarinet, he was accepted by Alan R. Kay, an artist-in-residence, whom Davani said played an integral role in his winning the Stony Brook Undergraduate Concerto Competition, for which he was awarded the Bright Lights Scholarship for music in March 2013.

“I feel very lucky to be able to study with one of the faculty members in the music department,” he said. “In the short time studying with Professor Kay, we’ve done some really great work.”

Davani describes his greatest challenge in school as registering for classes so that he has large blocks of time to devote to practicing.

“Aside from that, I manage to do everything,” he said.

As if his musical talents and accolades weren’t enough to fill up a resume, Davani has proven his extensive scientific abilities.

The double music and biology major was an Intel Science Talent Search Semi-Finalist in high school and was awarded third place in the New York State Science and Engineering Fair in the medicine and health category during his senior year.

As his musical talent continues to shine during the school year at Stony Brook, Davani says this summer he will be continuing his research at the vascular biology center at Winthrop-University Hospital, which is academically connected with SBU.