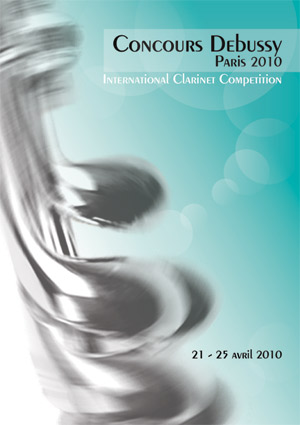 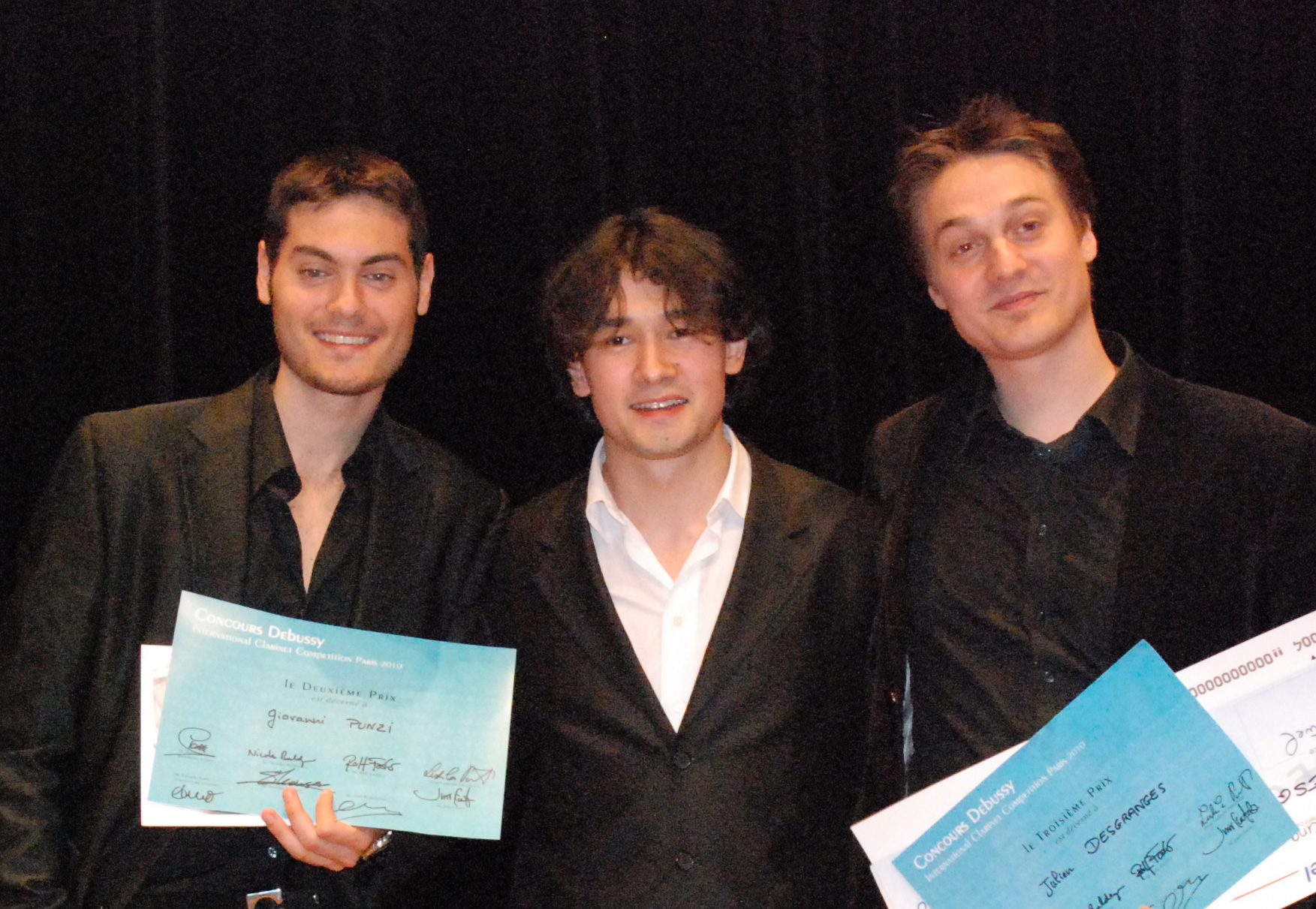 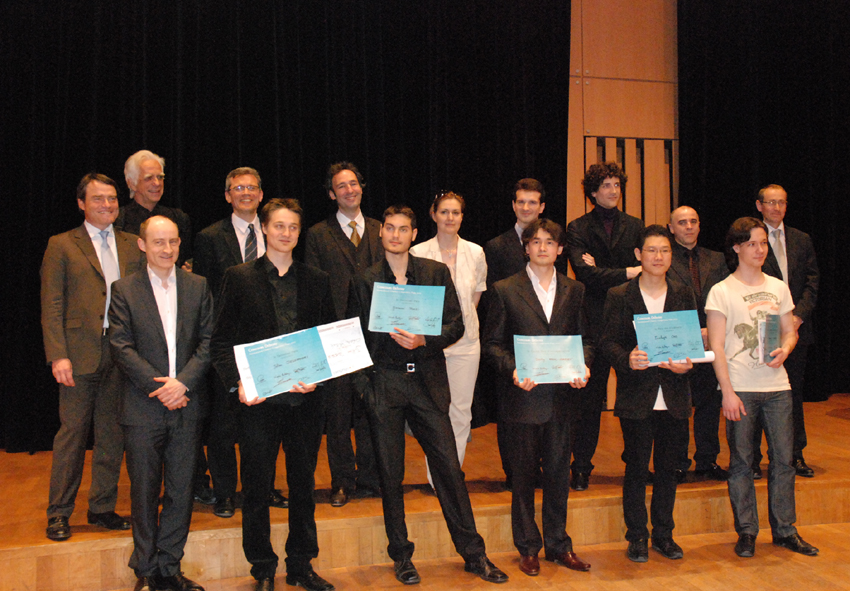 1st prize : Dmitry RASUL-KAREYEV, Russia (in the middle on the picture)
2nd Prize : Giovanni PUNZI, Italie (on the left on the picture)
3ème Prix : Julien DESGRANGES, France + Prize of the best performance of Karol Beffa « Epitaphe »

The first Paris Clarinet Competition with the superb Jury and International array of contestants convened with several rounds with 3 winners as stated above. The above galleries summarize all the rules and repertoire and outcomes.  The next Competition will be held in 2014. 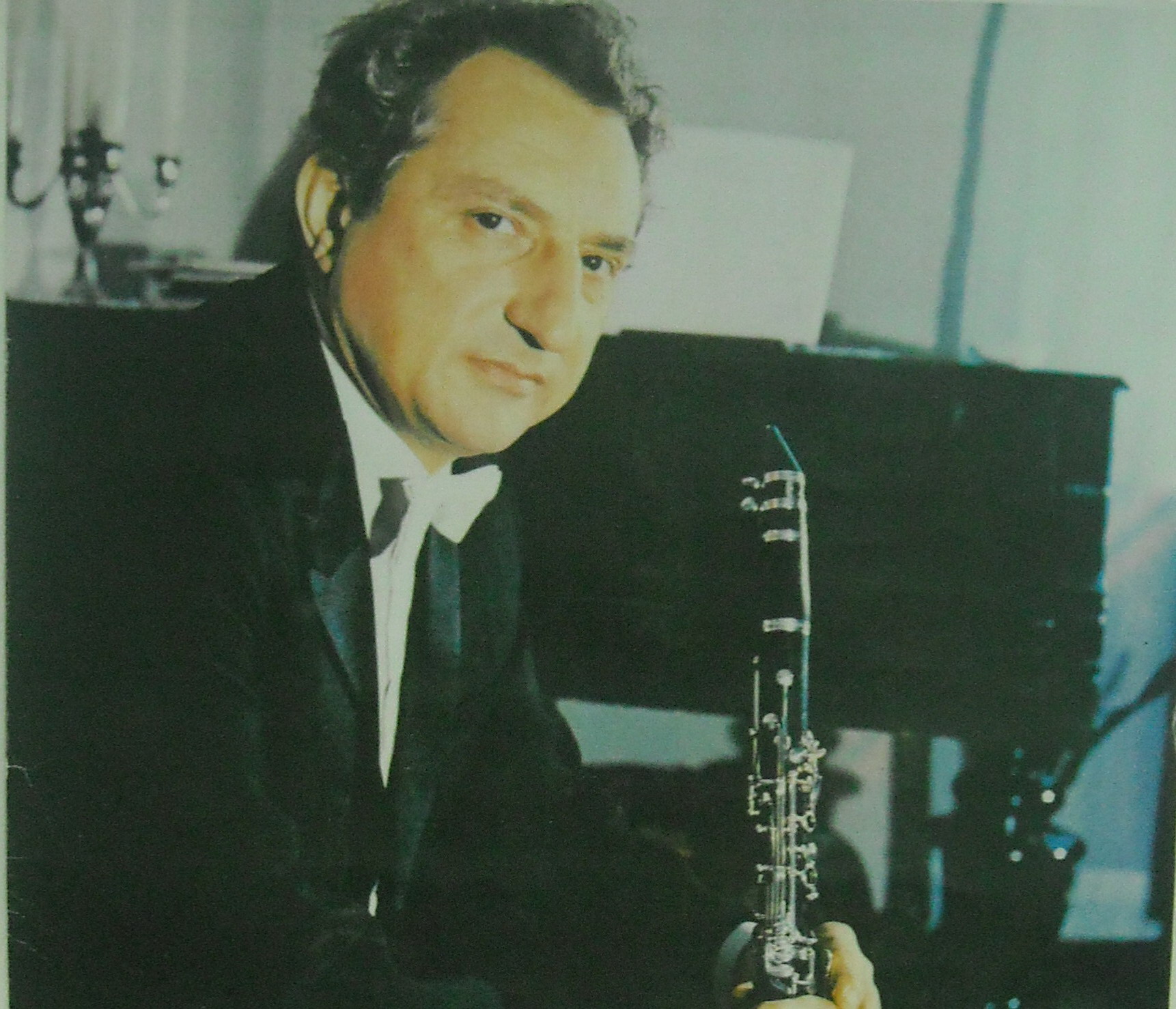 On April 23, 2010, in Belgrade, Serbia, distinguished Serbian clarinetist Milenko Stefanovic - an international soloist, long-time Solo Clarinetist of  the Belgrade Philharmonic Orchestra and Professor of Clarinet at the University of Arts in Belgrade and University of Pristina, Serbia – was awarded The Lifetime Achievement Award.

Milenko Stefanović (born 19 February 1930 in Belgrade, Yugoslavia - present day Serbia) is the most famous Serbian and Yugoslav clarinetist: a prize winner in the international competitions in Moscow, Munich, Geneva and Prague, soloist who has achieved significant international career, long-time principal clarinetist of the Belgrade Philharmonic Orchestra and Professor of Clarinet at the University of Arts in Belgrade and University of Priština.

Born in a family of amateur musicians, he started to study music at the age of five (violin, piano and, later, clarinet). Stefanović graduated from the Belgrade Music Academy (later named The Faculty of Music in Belgrade) as a student of renowned Professor Bruno Brun (1957). He completed there, with the same teacher, his postgraduate studies and was awarded the Magister of Arts degree (1971). Additionally, he studied chamber and orchestral playing in Salzburg, Austria in the class of Igor Markevich, Erich Leinsdorf and Fernand Oubradous.

Stefanović won many awards in different Yugoslav and international musical competitions, including the First Prize in the Competition of Young Musical Artists of Yugoslavia (Ljubljana, 1956) and several prizes in international competitions in Moscow (1957), Munich (1957), Geneva (1957), and Prague (1959). He was also rewarded the Award of the Yugoslav Radio-Television (Ohrid, 1972), Award of the Community for Culture of the City of Belgrade for the most successful musical creation (1975, 1980, 1981), "7th July" Prize (1962), the highest state's prize for the arts, Special Acknowledgment for the Highest Contribution to the National Culture in the Republic of Serbia, rewarded by Serbian Ministry of Culture (2007), as well as many other honors. In 2010 he was rewarded The Lifetime Achievement Award by the Association of Musical Artists of Serbia.
Stefanović was the principal clarinetist of the Belgrade Philharmonic Orchestra (1954-1976). Apart from holding that position, he also achieved a huge international success as a soloist and chamber music player.

Stefanović was also a jazz musician - soloist, composer and member of the Belgrade Jazz Trio.

He has recorded for the radio and television stations in Yugoslavia and abroad (Moscow, Rome, Paris, London, Berlin, etc.).

Milenko Stefanović has been esteemed by the critics very much. Despite the great number of his appearances, he has the honor to be one of the very few musicians who have never been reviewed negatively by the critics.

Stefanović was president or member of juries at many Yugoslav and several international competitions.

Stefanović has been very successful as a teacher, too. His former students hold teaching positions in music schools and universities and play in orchestras in Europe, Asia, Australia and North America.

He started his teaching career as a clarinet teacher at the Josip Slavenski School of Music (1967-1993).

He had been teaching at the Faculty of Music in Belgrade since 1976, when he was appointed upon recommendation of the previous teacher, Professor Brun, until his retirement in 1995.

Stefanović has been teaching at the Faculty of Arts of Pristina since 1975, when he was one of the founders of its Music Division.

He was also a Vice-Chancellor (1985-1989) and member of the Board of Trustees of the University of Arts in Belgrade .

He is a member and former president of the Association of Musical Artists of Serbia.

This annual Gala event, highly anticipated by students from all over Ohio and neighboring states, spent an entire day with Master Classes with Guest Artists Dr Caroline Hartig from Michigan State University and renowned Solo performer and Pedagogue, and Ivano Rondoni, major soloist from Italy.   Performers and Professors from other Universities in Ohio, Indiana and from The US Air Force Band from Wright Patterson Air Force Base also performed the final Gala Recital.   Hartig and Rondoni performed a shared program during this day.  Programs from the Master Classes and Recitals are galleried above with details.   During the day, a Clarinet Choir reading session convened under Dr Rischin, followed by a class for selected High School and ongoing college students.  The attendance was substantial and the learning atmosphere was positive.  Whenever such daylong events present themselves, it behooves all students and teachers to be a part of this given the benefits, and the day was free of cost from anyone attending.  Due credit is owing to Director Rischin for this special day for players.  As it is an annual event, calendars should be open for future Galas.

A review by Renee Pflughaupt

The 14th annual Midwest ClariFest, hosted by Diane Barger, Professor of Clarinet at the University of Nebraska-Lincoln, took place at UNL Friday, April 16, 2010. Michele Gingras, Professor of Music at Miami University in Oxford, Ohio, served as guest artist and clinician.

Gingras opened the day with a recital featuring Jewish music for the clarinet. She slowly worked her way from lightly ornamented pieces to Jewish compositions relying heavily on Klezmer technique and embellishment. Brenda Wristen, Associate Professor at UNL and Dr. Barger assisted Gingras with her fiery performance of Hevenu Shalom Alechem for two clarinets and piano by Peter Przystaniak.

During the lunch hour, Jessica Lindsey led an informal lecture concerning networking. The presentation guided the participants to creating professional networks as performers, educators, or entrepreneurs.

After the master classes, Gingras taught all of the Midwest ClariFest participants the basics of Klezmer technique and embellishment. In under an hour, over fifty clarinetists trilled, scooped and glissed along with Gingras to the traditional Jewish piece, Hava Nagila.

Between each piece the performers introduced themselves and their mission: to expose audiences to the wide range of music for the clarinet quartet. The selections reflected this, oscillating from Gordon Jacob’s English Scherzetto, to Dubois’ French Petit Concert, to Antonio Fraioli’s jazzy Rhythm Changes for Clarinets.

The day ended with a potpourri recital. McKiernan, as the announced winner of the High School Solo Competition, performed Osborne’s Rhapsody at the recital’s opening.

Participants from Midwest ClariFest followed with their own performances. A clarinet trio from the University of Nebraska-Omaha performed Beethoven’s Trio, Opus 87: Finale Presto. Tyler Goudlock, Andrea Wilger and Shawn Harwood all participated in the masterclass earlier that afternoon.

Jamie Reimer, UNL Lecturer of Voice, assisted Jan Harriott of the University of Nebraska-Kearney in Lori Laitman’s I Never Saw Another Butterfly. The piece, written for soprano and clarinet, utilizes poetry written by Jewish children during the Holocaust.

The Ad Astra Clarinet Quartet returned for the end of the potpourri recital. Kerstetter arranged three popular tunes for clarinet quartet. The entire audience was tapping their feet to the opening piece, Bohemian Rhapsody by Freddie Mercury. This was followed by Stephen Sondheim’s Send in the Clowns. Finally, the Ad Astra Clarinet Quartet concluded the recital and the 2010 Midwest ClariFest with a rousing arrangement of Clarinet Polka Medley.

Midwest ClariFest is scheduled this fall on Monday, October 4, 2010, with guest artists Denise Gainey, Associate Professor of Clarinet at the University of Alabama-Birmingham and Peter Wright, Principal Clarinetist of the Jacksonville Symphony Orchestra. For further information, please contact Diane Barger at <dbarger1@unl.edu>.

The 3rd Seminar held at this University under Professor Marguerite Levin was an active day with several seminars and active classes covering the major aspects of clarinet pedagogy and 2 concerts with guest artists and Professors from Baltimore's University of Maryland Richard Spece, Gary Whitman from Texas Christian University and current President of the International Clarinet Association - ICA, and Jazz Clarinetist Marty Nau, a major player and students from Towson and Baltimore performing a student program and the Gala Finale with a world premiere arrangement of 'Slipped Disc'  written by Benny Goodman and arranged by Scott Silbert.  Above galleries contain programs and pictorials of the entire day.  Marguerite Levin as Director is credited with this successful day, and also noted as Director of the ICA ClarinetFest 2004 held at the University of Maryland at College Park.