Ben Redwine, an aspiring classic/jazz eclectic clarinetist and member of the US Naval Academy

Band and a Selmer artist, gave an impressive multi-faceted program with 2 guitarists Paul Moeller and

Max Murray on Bass guitar.  Several arrangements of basic jazz pieces were played with this combination,

including New Orleans, Sweet Georgia Brown, Up a Lazy River, I’ve Got Rhythm, and more.  Classic

Gennusa in his mouthpiece tradition.   Ben Redwine has premiered a new Clarinet Quintet written by

John Stephens and will be performed at the Oklahoma Clarinet Symposium in June.  A new recording

of this work will be available at that time. He is a member of the Washington based

American Symphonic Clarinet Choir of which Dr Stephens is Conductor. 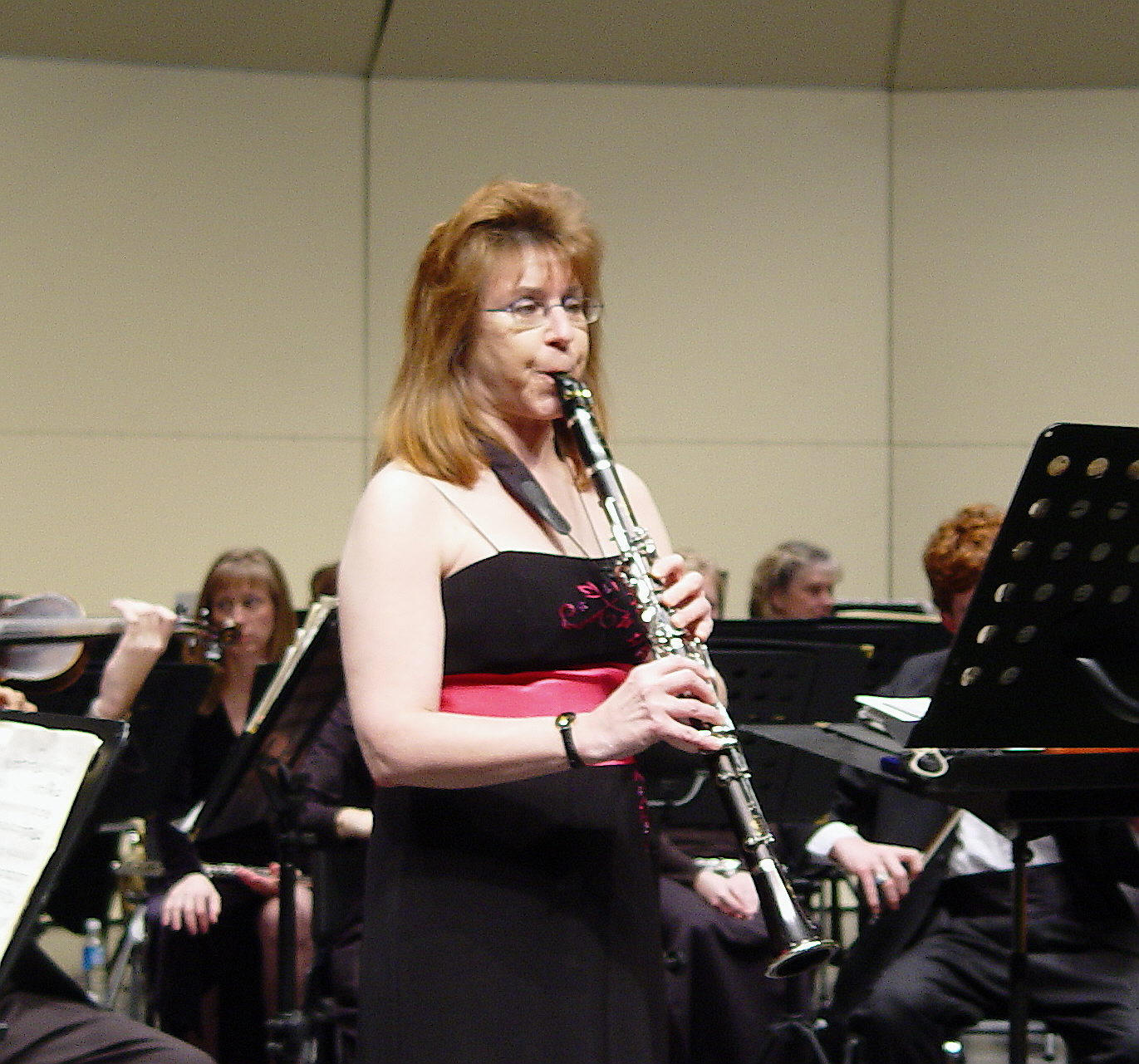 the Mozart Clarinet Concerto, K622.  Other works performed on the DSO Spring Concert were

"Brandenburg Concerto No. 1" ( performed with the Martinsville Early Music Ensemble)and

"Music for the Royal Fireworks" by Handel.

University's Dana School of Music. She went on to become the principal clarinetist with the First

US Army Band, and 2nd Infantry Division Bands, as well as featured soloist. Ms Ogram then

concert tours. Among other duties, she was a clinician and founding member of the Field

Winds, and currently performs with the Danville Symphony.  Ms Ogram was the featured soloist

She was the Assistant Artistic Director for the International Clarinet Conference, summer 2004,

at the University of Maryland.    Ms Ogram is currently the Director of the Music Program,

This special concert presented by this acclaimed ensemble specialized in diverse composite chamber music, especially of living composers, played to a packed house celebrating the event.   Of special interest is the Monologue III by composer Peter Schikele, known for his PDQ Bach past compositions; this work is a serious piece written for 9 Clarinets, comprised of some of the finest players in New York with Solo Clarinetist from the NY Philharmonic Stanley Drucker, husband to Music co-Director Naomi Drucker.  The work played with no conductor and was musically communicative and technically very tight.  More information below about the extensive history of this ensemble.

The annual convention of this elite by invitation only organization for Band directors of distinction held their event on this fine campus and held events featuring many of the finest College/University Band in the USA, all guest conducted by many of the elite directors in the nation.  The University of Florida Wind Ensemble gave the opening concert with a challenging program, and as a special feature, had as guest soloist the legendary Solo Klarinettist of the Berlin Philharmonic Karl Leister, in residence all week for the University School of Music,  performing a premiere of the Carl von Weber Concertino Op 26 arranged for 16 instruments Harmonie Ensemble with a newly discovered Cadenza by Pamela Weston from England.  This new arrangement may well be a new part of the Band repertory in regards to serious performance of this work.  This performance was certainly a high point in this conference as Leister opened ears and eyes as an incredible role model for both clarinet students and directors alike. Meastro Leister gave an appearance for the Bandmasters at a meeting where he emphasized the importance of teachers sharing their musical gifts and teaching to the next generation of future musicians for the well being of the music profession, both in performance and teaching.   A major performance, guest conducted, featured the United States Army Field Band, the principal Touring Band organization of the US Army, under Commander Colonel Finley Hamilton to a full house of enthusiastic members and an educated audience. This week will be hard to forget given the high powered and prestigious performances held.

Of special interest is a Master Class/ Concert tour now in progress by Karl Leister, the renowned Solo Klarinettist in the Berlin Philharmonic under Herbert von Karajan, March 2005, and visiting 6 Universities in the USA, including University of Florida,  in Atlanta Georgia with the Atlanta Clarinet Association,  DeKalb N. Illinois University, University of Michigan, Michigan State University, Loyola University in New Orleans, Rice University in Texas,   People responsible for arranging details of this tour included Mike Getzin, WKA CEO,  Mitchell Estrin, WKA Performing Organization Chairman and Professor at University of Florida, Bernd Wurlitzer, maker of the acclaimed Wurlitzer Klarinetten in Germany, and the firm Vandoren, involved in the tour sponsorship.

18 months ago, this Master Class / Concert Tour was organized by Mike Getzin, WKA CEO, and Professor of Clarinet at this University Mitchell Estrin, and it came to remarkable fruition this week as part of a 7 University 3 week tour.  The week was intensive in Master Class sessions with students who were required to audition for the privilege of working with Mr Leister.  From all standpoints, the intensity and musical fulfillments for each of them was an experience that will follow them for their lifetimes.  To work with a ‘god’ of this instrument of the first tier as an artist, only to be compared with the same with Stanley Drucker of the New York Philharmonic, is an incredible honor.   Performances of Mr Leister included the Brahms Clarinet Quintet Op 115 with his preferred Leipziger String Quartet who performed legendary class which brought the high for the whole week.  The crystal transparency and almost spellbounding musical communication brought people to their souls.  Many who attended were so moved that they sent emails to Mr Estrin espressing incredible responses to the Brahms.  A recital featuring in The Mendellsohn Concertpiece #1 for 2 Clarinets and Piano with Professor Estrin and Herr Leister, along with a concert including the Brahms 2nd Sonata and the Robert Schumann Fantasy Pieces, the Romanze by Max Reger, and a solo piece ‘When the Wind Turn’  by Uhl Alihulin.

Meastro Leister performed with the University of Florida Wind Ensemble a new arrangement of the Weber Concertino Op 26 with Harmonie Ensemble of 16 Winds; unique was the arrangement for this ensemble, and a newly discovered cadenza written by Carl Baermann played here for the first time found by Pamela Weston, a Clarinet research authority in England.   Performance of this work was a high point for the ensemble and the American Bandmasters Association Convention held this same week on this campus.

At the conclusion of this week,  Wurlitzer from Germany provided for audition a set of Reform Boehm Klarinetten specially hand picked by Mr Leister to be auditioned by the participants to try for themselves these remarkable instruments which presently are for immediate sale to the first buyer.  To ignore this opportunity is very unfortunate in that these clarinets are perfectly matched, and normal waiting time is 1-2 years. Mr Leister worked with all those who tried out the horns.  Of interest about Wurlitzer, these instruments are hand-made limited production, and no artist is paid to represent the firm as clinician.  This indicates that the horns stand on their own merits as all who play Wurlitzer have paid for their own.

The success of this week is of profound credit to Mr Estrin, indicating from this appearance and fulfillment to be the primary and high point of the entire Leister 3 week tour. In 2001, Stanley Drucker performed a successful residency at this campus.  Leister and Drucker are considered the best clarinetists in the world, and to have had both, this certainly brings the School of Music to a new level of accomplishment and a new standard to attain in the future.

A phenomenon  performance took place at this matinee concert where the concert was split between chamber music on the first half, and full Orchestra performing  Richard Strauss on the later half.   Bartok Contrasts, for Violin, Clarinet and Piano featuring Stanley Drucker, principal Clarinetist and the most frequent orchestral soloist.  The Contrasts was recorded by Mr Drucker on Bartok Records in 1954, 51 years ago, and is still considered the definative recording.  The performance here is nothing less than historic in its incredible intensity and virtuosity that Drucker is famous for.  Historical information is stated below. 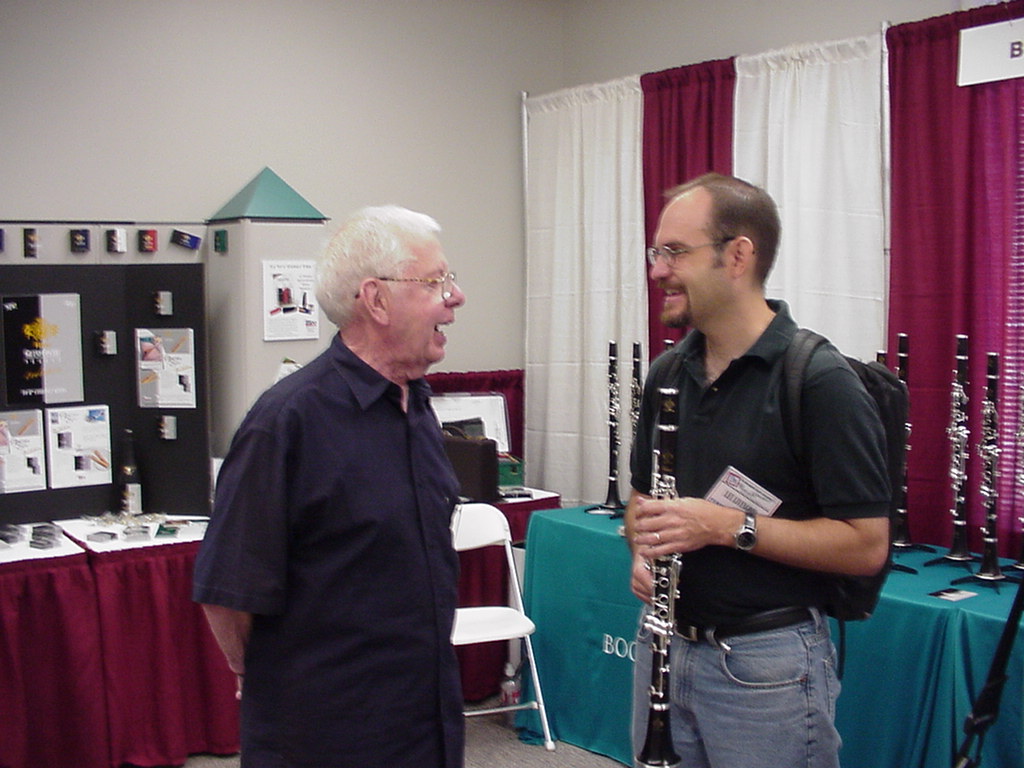 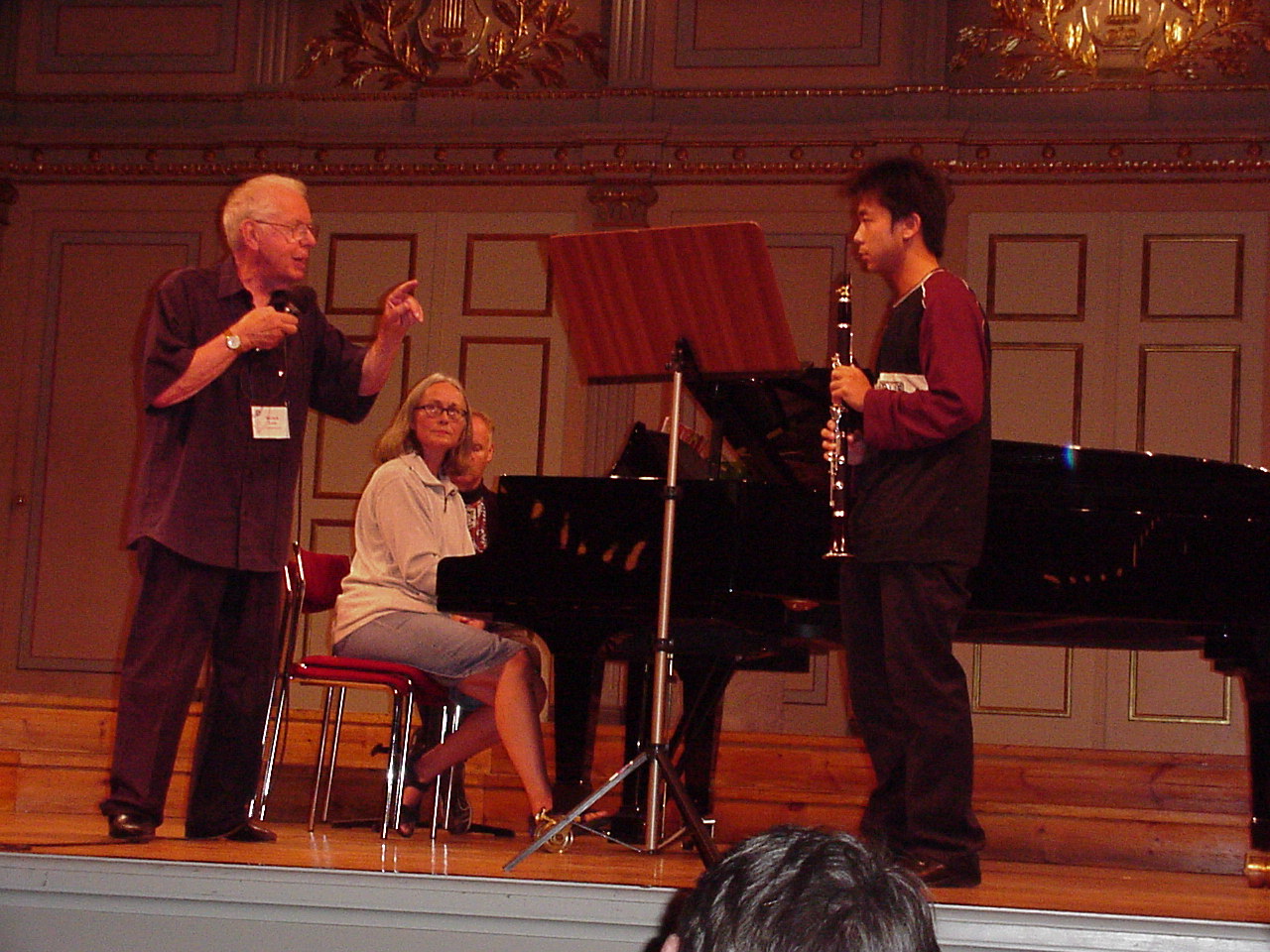 Renowned clarinet master Mitchell Lurie visited The Buffet-Crampon office in Sun Valley, California in February, where he was presented with his beloved 1967 Buffet Crampon clarinet, recently refurbished at Buffet's facilities in Mantes, France.  Mr. Lurie, set to celebrate his 83rd birthday next month, was accompanied by his wife of sixty years, Leona, an accomplished pianist and teacher in her own right.

Buffet craftsman refinished both the African black wood body and re-plated nickel-silver keys, even stamping the Buffet Crampon logos in gold leaf.  Exclaiming, "My goodness, it looks like its brand new," Mr. Lurie expressed his profound gratitude to Francois Kloc, TMG's Manager of Woodwinds North America, who coordinated the refurbishment.

"Mitchell Lurie is an icon in the music world.  His reputation and integrity are exceeded only by his warmth and generosity of spirit...it is our honor to provide this gift of renewal to him," said Scott Pfeiffer, TMG's Marketing Services Manager.

For more information, please contact Francois Kloc at francois.kloc@buffet-crampon.com or by calling 1-800-426-7068.